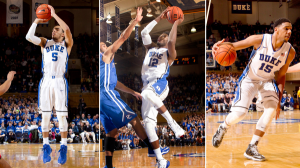 St. Louis, Mo. — U.S. Basketball Writers Association (USBWA) announced the organization’s early-season Watch List for men’s national player and freshman of the year in college basketball Monday, with three Duke Blue Devils selected as early contenders. Freshmen Jahlil Okafor and Justise Winslow were named to the Oscar Robertson Trophy Watch List, the award given to the association’s player of the year, while Okafor, Winslow and fellow freshman Tyus Jones were each named to the Wayman Tisdale Award Watch List, the honor given to the nation’s top freshman.

Since 1959, the organization has tabbed a national player of the year, making the honor the second-oldest of its kind. Thirty years later, in 1989, the USBWA announced its first national freshman of the year. Most recently, Duke’s Jabari Parker earned the Wayman Tisdale Award, becoming the first Blue Devil to receive the award since Luol Deng in 2004.

The trio of Okafor, Winslow and Jones has posted strong play through five games this season. Okafor, a two-time ACC Freshman of the Week honoree, recorded his first collegiate double-double (10 points, 12 rebounds) in a 70-59 Duke victory over Stanford in the Coaches vs. Cancer Championship game. Okafor is averaging 15.8 points, 8.0 rebounds and 1.6 blocks per game, while shooting 60.0 percent from the field this season.

Winslow has demonstrated the ability to impact the game in a variety of ways, ranking among the league’s top scorers at 15.4 points per game, while also averaging 5.8 rebounds, 2.1 assists, 0.9 blocks and 0.9 steals per game. Winslow helped lead Duke past Fairfield earlier this season with a team-leading 18 points, shooting 6-of-10 (.600) from the field in the team’s 109-59 win.

In addition to Okafor and Winslow, Jones has posted numerous stats that rank in the conference’s top 10, including 5.0 assists, 5.0:1 assist-to-turnover ratio and 2.0 steals per game. Jones saw his most proficient scoring output of the season come against No. 19 Michigan State, hitting 4-of-5 (.800) shots from the floor and 7-of-7 (1.000) free throw attempts for 17 points.

Both awards will be announced in March, with the winners receiving the honors at the Devon Energy College Basketball Awards event at the National Cowboy and Western Heritage Museum in Oklahoma City on April 14, 2015.