By Brian HoraceNovember 27, 2014No Comments

Clearly no one jumps out of their seat when Duke plays Furman but with a tough game against Wisconsin looming these types of tune-ups are necessary. Duke gets the win 93-54 with a huge night for freshman Jahlil Okafor. Okafor shot 12 of 14 for 24 points but almost more impressive were his 3 assists which could have easily been 6 or 7 if not for some missed open shots. Still remains to be seen if the big fella is up to those types of numbers versus good competition but the repetition and practice he’s gotten against different looks and schemes will go along way towards his basketball education.

Amile Jefferson added 16 points on 8 of 9 shooting and also pulled down 12 boards for the Devils. Jefferson was the recipients of some good interior passing but also was the ultimate opportunist gathering boards and converting.

The backcourt for Duke took a backseat to the front court in this game but they were effective in their own right. Senior guard Quinn Cook scored 11 points but also dished 5 assists to only 1 turnover. He has been as unselfish as any player on the squad this year. Tyus Jones did not hit a shot in this game but had a couple of wizardly moments in transition on assists to Jahlil and Amile in the pain. Jones would finish with 2 points and 7 assists to 2 turnovers and played good defense on the guards for Furman. Matt Jones shot the lights out from 3 point range going 4 of 5 but most importantly, Jones took good shots and shot with confidence. Jones finished with 13 points and 2 assists. Rasheed Sulaimon did not shoot well from 3 going 1 of 4 but did shoot 4 of 8 overall. It was good to see the ball go in for Rasheed a couple of times and even better Sulaimon had no turnovers.

Defensively, even though this was Furman I was impressed that Duke gave up no fast break points in this game. Duke was engaged and got back on defense. Shoring up some of what was lacking in the last couple of games.

Some notes I took during the game: 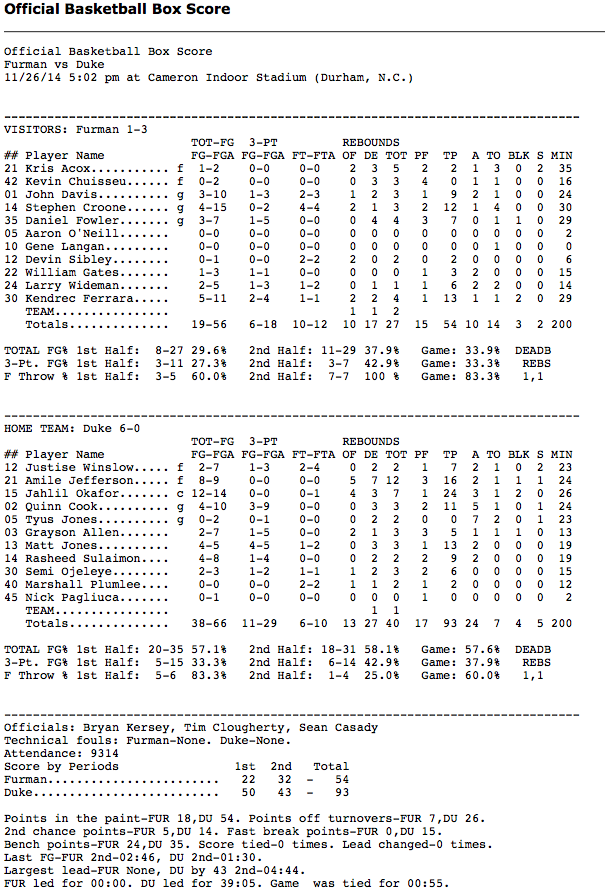