Who Would Be Your Player of the Game? Here is Mine and Why.

By Brian HoraceDecember 20, 2013No Comments

Who would be your player of the game? Here is Mine and Why. 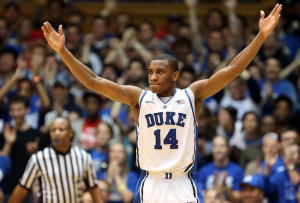 I tried to come up with who with who I thought should be the player of the game in last nights win at UCLA (80-63). There were several options you could go with, the obvious choice was Jabari Parker who had great numbers with 23 points and 10 boards. Parker was 7 of 13, 4-for-8 performance from beyond the arc and 5 of 5 at the free throw line and just to fill up the stat-sheet that much more he threw in five assists.

Quinn Cook is also more than worthy of being called the player of the game. Cook had 14 points and his 8 steals queued many of the Duke fast breaks that got the Devils going. Maybe Amile Jefferson should get it as he gave Duke good minutes and even blocked a couple of shots to go along with his 11 points and 7 boards. In the second half Jefferson was also used as a zone buster as he camped out in the middle of the zone and was able to deliver passes to open shooters. That was an important stretch where Duke was able to get points utilizing good ball movement and those open shots paid off. Without good decisions from Jefferson, the second half run doesn’t get off the ground.

You could also give it to the bench. As a whole the bench provided Coach K with 22 points but I’m going to give it to Rasheed Sulaimon. Sulaimon, who had previously been in quite a slump, gave the Dukies 18 good minutes last night. He didn’t shoot the lights out and his numbers don’t jump off the  box score as amazing but why he did do was be engaged. Rasheed had his head up, made the most of his opportunities and played for his team. His 8 points were big for Duke but what I loved seeing from the sophomore was the 5 rebounds and 4 assists. To me, more than anything, his stats to the right of scoring are what shows that instead of focusing on what he hasn’t been doing well, Sulaimon is finding ways to contribute, to be useful to his team. Whatever happens from here, whether he slumps again or gets it going, he knows as do we, the type of player he can be.

With two games left before ACC season kicks into gear for Duke, they have the opportunity to work on building consistency. Getting leads in games hasn’t been a problem for Duke, but pushing those leads and maintaining them has. Duke will need to acquire that “killer instinct”, that ability to put a team away once they have that team on it’s heels.

Would love to hear from Duke fans, who would be your player of the game?