By Brian HoraceJanuary 4, 2014No Comments

Not much to say about this game. Duke played as awful and Notre Dame played inspired. Duke loses to Notre Dame 79-77 and had Notre Dame had it’s best player one has to wonder if this would have been a blowout for the Irish. Duke did not play inspired basketball and had they won, this post would still be tinged with disappointment because this game is a product of Duke not doing the simple things that one would hope at this point in the season would be intrinsic and inherent.

Duke was lucky to have a 2 point lead at the half against this Notre Dame team and only did so on the strength of good shooting rather than any sort of defensive effort or pressure. Duke allowed the Irish to shoot 50% from the 3 point line and 52.6% overall. We can sit here and say it was all size but it was more about effort and simply not playing smart basketball. Duke was consistently out of position and beaten to spots on the floor when they were clearly the quicker team, I cannot begin to understand that. Duke was beaten in nearly every phase of the game, the rebounding battle was lost by double figures (29-40), the assist battle also lost by double digits (8-18). Duke had 8 assists for the game, for the entire game, that is hardly acceptable for a Coach K team. The lack of defensive effort 14 games into the season isn’t really acceptable or expected and I would also put a lot of this on Duke not playing a true road game this season until this Notre Dame game.

There was a complete lack of defensive communication for Duke, no one played particularly well when the game was on the line and it ended on a turnover with Duke having the opportunity to tie the game when Rodney Hood over penetrated and passed to a Notre Dame defender to keep from going out-of-bounds.

In his worse game as a Blue Devil, Jabari Parker was a non-factor with 7 points on 2 of 10 shooting. Parker would have as many turnovers as made baskets and in a loud statement Coach K would bench Parker when the game was on the line and still Dukes defense was porous and lacking. Duke needed a much better game from Parker and for the first time this year the freshman couldn’t deliver.

When one of Dukes 3 (Cook, Parker, Hood)  doesn’t show up in numbers in the scoring column Duke needs for the bench to step up, the bench was only able to deliver 16 points but the issues that Duke had were less about offense and more about defense and communication. This is a huge backslide for a team that seemed to have turned the corner.

There were bright spots for Duke in the form of Quinn Cook who scored 22 and Rodney Hood who scored 27, they single-handedly kept Duke in the game but defensively neither communicated very well.

Hats off the Coach Mike Brey and Notre Dame who overcame some serious odds to knock off a highly ranked team.

One thing to remember Duke fans is that if this were a sprint we would have lost, but it is not, the season is a long grind of getting better and a few backslides. Defense and rebounding will be an issue for Duke all year, as those stats go, so to will Duke. Every team has its’ weaknesses Duke will need to do a much better job of masking or overcoming theirs. This will not be the last game Duke loses this year so we have to temper our disappointment and how we react to these loses, we want to be the type of fan base that supports. We can support and still be honest and honestly today Duke wasn’t very good, all we can do is hope that they hit the practice court again harder and learn. This loss doesn’t define this team but hopefully it can be a defining moment that they learn from. 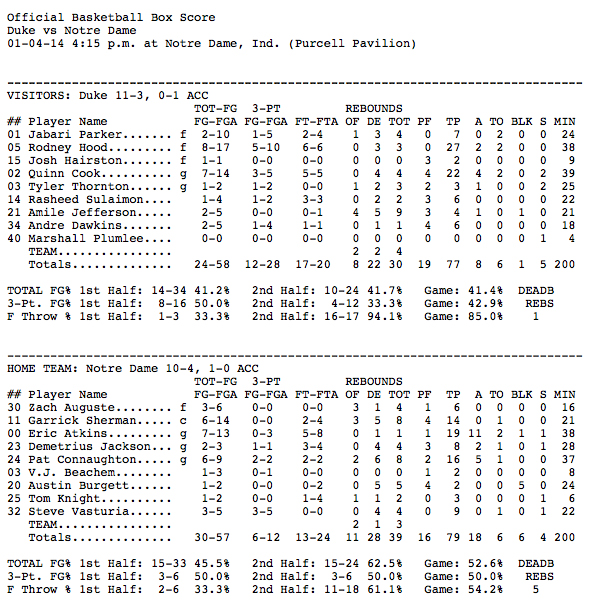