By Brian HoraceFebruary 12, 2015No Comments 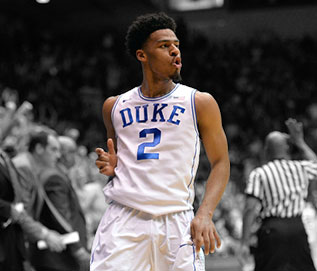 Washington, DC native Quinn Cook, the lone senior on this year’s Duke squad, may not be getting the amount of press coverage and buzz that the “4 Quarters” (the pre-season nickname given to the heralded 4-man freshman class Coach Mike Krzyzewski hauled into Durham this year) has, but his importance cannot be overstated.

Cook has been Mr. Big Shot all year for this Duke team. The senior is shooting the highest percentage from the 3-point range (39.6%) for this squad and is also shooting over 90% (91.2%) from the free throw line to lead the team. On a team that is shooting under 70% from the line, Cook’s presence at the end of games is invaluable. Cook is second in scoring on the team, averaging 14.7 points a game just behind Jahlil Okafor.

Cook’s shooting and finishing ability has been a spark for Duke this year. Cook was clutch and critical in igniting the run that allowed Duke to pull away from UVA in a signature win for Duke in January. Cook in his latest outing scored a team high 26 points against Florida State in a close game that nearly got away from Duke. Cook has scored in double figures in all but 3 games this year and has been remarkably consistent. It’s difficult to say where Duke would be without his leadership this year, but I doubt seriously they would be a top ten team.

Cook, along with the coaching staff (but probably more so Cook than anyone), has been monumental in the growth of the younger players on this team. I said before this year started that Cook, being the point guard, had the toughest job of anyone on this team. He has had to endure massive turnover in his 4 years at Duke with basically a completely different team structure each and every season. Having to adjust to these fluctuating line-ups, in addition to learning the intricacies and nuances of each player’s game, has made Cook a special player. He has adapted from a guy who was an overemotional and emotive player to a guy who doesn’t put his head down or get too low. He has learned and reined in and even channeled his emotions to the benefit of those around him. He is indeed the spark on this team.

Numbers alone aren’t the full story of what Cook brings to this squad. Embracing the role as a captain this year, Cook has been a leader, a big brother, a motivator and a general at times. I would venture to say Cook puts more bruises on his teammates than opposing players.

And along with being named a captain this year, Cook has earned the ultimate measure of confidence from Coach K by leading this team in minutes played. Cook is averaging 35 minutes a contest, the most on the team. Naysayers in the pre-season were quite certain that Cook would be relegated to a bench player, doomed to spend his final year in Duke blue backing up the freshman phenom Tyus Jones. Those people are indeed eating words at this point.

Coach K: “I think he has been our most valuable guy.  He has not only been a good player, a really good player, but he’s been a great leader. And our guys follow him. He has been one of my better leaders that I have had at Duke. I didn’t know that that would happen this year. Of all the guys, I’m most proud of him.”

Coach K and staff have found great success playing two point guards in the back-court—two relatively small guards at that—yet Duke has been able to contend and contend well against teams with traditional lineups. We can attribute some of this success to the Durham brain trust but a lot of credit has to go to the senior who was willing to accept whatever role the staff threw at him in quest of something beyond personal glory. Cook spent the off-season working on his game, his handle, his shooting, his finishing at the rim, even his quickness defensively. He has transformed himself from just a player to a player that Duke cannot win without.

On how Duke was able to stop Jerian Grant: “Duke had a lot to do with it, and so did Quinn Cook.”

The story of Quinn Cook and his legacy at Duke is still a work in progress; it is still a story where pages are being written, but that final chapter is fast approaching. Cook wants a banner, and Duke fans – me among them – want it for him. It remains to be seen whether this tale ends with that aforementioned banner or not, but in my eyes Cook will go down as one of the best leaders Duke has had in a number of years. A moxie-filled, hype man who was never afraid to take the big shot

Duke has 7 more regular season games before the ACC and NCAA tournaments begin and Duke fans are hoping that this year Quinn Cook gets to have his senior moment.

Duke Basketball to Participate in Dribble for Victory Over Cancer