By Brian HoraceDecember 3, 2013No Comments

Duke gets home court advantage in the ACC/Big Ten Challenge this year against a Michigan team who many have picked to finish no lower than 2nd in the Big 10. Overall, Duke dominates the series with the Wolverines 21-8. However, coming off an appearance in the NCAA championship game, the Wolverines have a deep, athletic, and experienced roster despite losing Trey Burke and Tim Hardaway Jr. to NBA draft last year. It will be the first meeting between the two schools in the 15-year history of the event.
The Blue Devils are 12-2 all-time in Big Ten/ACC Challenge play, including a 5-0 mark at Cameron Indoor Stadium. Duke is ranked 10th in the AP Poll and 8th in the USA Today Coaches’ Poll, while Michigan is ranked 22nd and 21st, respectively. The Blue Devils are 38-13 all-time when ranked No. 10 in the AP Poll. The Blue Devils are playing their 220th straight game as a top-10 team in the AP poll. Duke is 181-38 (.827) in that span.

Michigan returns one of the best shooters in the country in 6-6 wing Nik Stauskas (averaging 20.3 points per game and shooting 47 % from 3-point range), however he is questionable for this game due to an ankle injury suffered midway through the second half of Michigan’s 63-61 loss to Charlotte in last Sunday’s Puerto Rico Tip-Off championship game. He remained in that game after sustaining the injury, was visibly hurt, and hasn’t practiced since Michigan returned from Puerto Rico. Although participating in pre-game warm-ups in their game this past Friday against Coppin State he did not play. Prior to the game, coach John Beilein noted, “I don’t know. Until he’s practicing 100 percent, he won’t go in there. He’s got to be pretty close to 100 percent to go in there.”

If Stauskas cannot play, Zak Irvin will fill his shoes, which he did quite nicely against a less talented Coppin State team. Regardless of Stauskas’ status, the Wolverines have one of the most athletic hybrid forwards in Glenn Robinson III (averaging 12 points per game and connecting on 41% of his shots). In addition, they have one of the best rebounders in Mitch McGary averaging just under 8 RPG. Rounding out the top players is 6’-6” freshman guard Caris LeVert averaging just under 14 PPG on 50% shooting (40% beyond the arc).

So, what does this mean for, what we all know now, is a Duke team trying to find its way in developing a balanced game on both ends of the floor? The Devils began the season as a top five team, but the early season schedule has been tough and they already have two losses. However, those two losses were to Kansas and Arizona, both top five teams, but Duke was predicted to win both.

Duke is led by freshman “diaper dandy”, and perhaps the best player in the country at this point, Jabari Parker, rising sophomore (transfer) Rodney Hood, and junior guard Quinn Cook. They are currently scoring 26%, 23%, and 16% of the team’s points, respectively.

Parker, who has the talent to be the top pick in next spring’s NBA draft, has immediately stepped into the top role in Duke’s offense. Jabari began his career with seven 20-point games (the streak ended in game eight against Arizona), the longest streak to begin a career since Texas’ Kevin Durant began the 2006-07 season with seven straight. Parker and Durant’s streak is the longest by a freshman over the past decade. Parker is averaging 23 PPG with a FG% of 55 and he has hit half of his 28 3PA. He is going to be a matchup nightmare for whomever Michigan sticks on him. Close behind though is Hood whose FG% is an astounding 62 and has hit 13 of 22 beyond the arc. Though not nearly as good a rebounder as Parker, he gets to the line more effectively (67.1 FT Rate) where he hits 82% of his shots. Making sure that both these outstanding wings have the ball is Cook, who is playing the largest share of minutes on the team and dishing out assists at a rate of 29.1 (with a TO Rate of 14.5). Quinn leads the ACC and ranks 19th nationally in assists (6.0 APG.) and already has eight or more assists in four games. He has committed more than two turnovers just twice this season and boasts a 3.4:1 assist-to-turnover ratio.

In addition, Cook can shoot effectively from all over the court with a 56/38/84 (eFG/FG/3P) percentage split.

The remainder of the Devil’s ‘primary’ squad consists of Josh Hairston, Amile Jefferson, Tyler Thornton, and whom many in the media (including us) are calling the “X Factor”, Rasheed Sulaimon. Andre Dawkins and Matt Jones have become consistent ‘off the bench’ players at key points in games.

Although both Michigan and Duke are legitimate Final Four contenders both have some similarities to address before even thinking that far out. Neither team dominates the inside and has moderate trouble on the boards, Michigan more so. Both teams love to get out and run, then if the break opportunity is stopped fire up three pointers at will at times. They are currently not top-notch on the defensive end, but Duke’s man-to-man fundamentals are more obvious. In short, both teams are vulnerable to big teams with an inside game at one end and strong defense at the other.

Therefore, on the surface, Duke mirrors Michigan in many regards. Both will play man-to-man defense, and both teams have been hurt inside against good competition. Either team could live or die with the three. In Duke’s case, an attempt to get the ball inside will occur whenever possible; however, this is not really the case with Michigan. If Michigan allows easy entry, Duke will obviously take advantage of this. Duke will attempt to wear Michigan down if the inside game works. This should not be a slug it out point guard to wing to post type of game. About everything basketball has to offer will be on stage. If it comes down to a grind in the end, Duke has an advantage. Duke has to play that style or else fire threes against good competition.

In our opinion, rebounding will be very key in this game for Duke, not letting Michigan get second shots. Also converting turnovers into points will help Duke build and keep a lead on Michigan. In addition for Duke, who will be the scorers that compliment Parker and Hood? Cook has shown he can be that guy, but can he be that guy and manage to keep Rasheed Sulaimon and Amile Jefferson engaged in the offense? 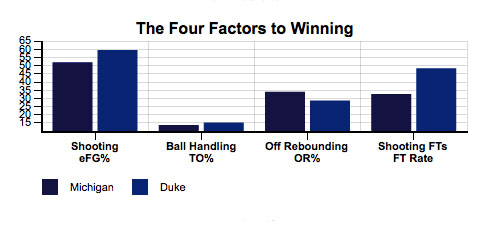 At the end of this game, for Duke to prevail, look at the rebounding numbers, assists, and whether Duke gets a 3rd and 4th double figure scorer. If these things come to fruition Duke should win going away.

Michigan is going into one of the most hostile environments in college basketball with its go-to scorer questionable with an ankle injury and its all-American caliber post player still working back to 100% from an off season back condition.

Michigan has the firepower to keep things close throughout, and that may very well happen. However, late in the game the difference will be that Duke has its man in crunch time, and Michigan still doesn’t. Unless something drastic has taken place since losing to Arizona, this game may very well be decided late, particularly if Michigan fails to capitalize on missed opportunities wastes critical possessions.