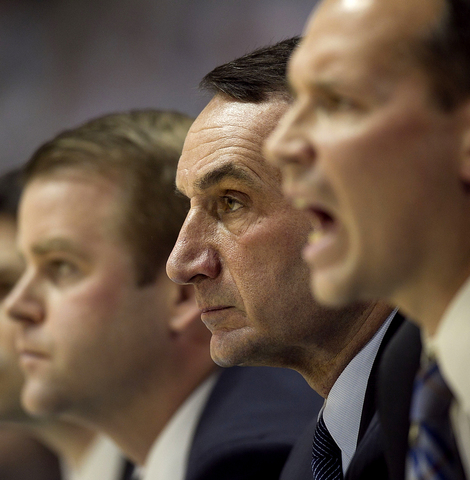 Season Ends but What’s Next and Why?

While not the way you want your team to end the season it was no surprise to those of us who have watched Duke play this year. I recall mentioning earlier in the day at work that if I wasn’t a Duke fan and I was looking to pick an upset that Lehigh would be the one. And really aside from the seeds can one really call it too much of an upset? Duke probably played its worse basketball in the last month. The foot injury to Ryan Kelly cannot really be blamed. This was not a team built for March.

People have remarked that Duke had beaten some good teams this year but even that, aside from the miracle at UNC, happened early. The wins against MSU and Kansas were all at a time when those teams were still finding themselves. Those teams progressed, got better while Duke seemed to regress.

Team chemistry and a lack of leadership has been an issue all year long, the talent is there but clearly this is a team of individuals who never truly bought in. A team more than wiling to take it upon themselves to try to win the game instead of trusting in teammates. A team who defensively never was able to embrace that mindset. Not able to keep guards in front of them. Not able to contain the dribble drive. Not able to box out or rebound effectively.

Lehigh pretty much dominated this entire game beating Duke 75-70, Duke played well in spurts but it was clear the same disjointed and sloppy play thatÂ  seemed to be plaguing Duke the last month was not overcome. There are probably not many teams in the tournament Duke was going to match up favorably against but your hat has to go off to Lehigh, they played great, Duke did not.

I didn’t see in the eyes of the players a belief that they could win, there was not fire or passion (sans Austin Rivers) and clearly no cohesion. That’s the word I have been looking for, cohesion, this group never played like a team, it was almost like a when you are thrust into a team of guys at the gym. You don’t know their tendencies, or strengths, you don’t fully trust them. I saw lots of that this season.

While next year it’s my hope along with all fans that Duke rights the ship, it’s hard to see what will change in the off-season. We can’t make our guards faster. Yes, we will have the addition of Rasheed Sulaimon, who by all accounts is coachable and quick. We will have Marshall Plumlee and Alex Murphy as redshirt freshman, but the improvement that needs to happen must be with players like Andre Dawkins who must get better on defense and also get better offensively closer to the basket. Seth Curry, Quinn Cook and Tyler Thornton will need to be much better position defenders and rebounders from the guard position. Tyler Thornton will need to up his offensive game, lots of time shooting in the gym should accomplish that.

The position where Duke will be lacking in is on the wing, its too early to say but not likely that Duke will sign the versatile, athletic wing they covet, and while Alex Murphy has a good unique skill-set, he isn’t that. I’m not sure what happened to Michael Gbinije this season, not sure if it was nagging injuries, lack of good practices or what but he saw very little action and has not looked happy on the bench. Read into that what you will.

Ryan Kelly will have to learn to be a more versatile player as well, improvement on defense is a must, and also being able to embrace being a power forward with perimeter skills rather than just a perimeter player with size.

Questions remain as to whether Mason Plumlee and Austin Rivers will return, while neither are ready for the NBA, one never knows what goes through the minds of young men, or who is in their ear. Both need time, both have major improvements to make. Plumlee needs to not disappear in games, needs to play with fire, and work on his footwork. He also needs to be dominant, he has the skill to do so but needs to take that initiative. Austin Rivers can be a dominant player but needs to really marry that desire to take control with not alienating his teammates. Learning to trust others and pass the ball and use your teammates as weapons and not obstacles. His aggressiveness is both his strength and his weakness. At some point you have to be able to use that ability to drive to the basket as a decoy, when defenses collapse around you, hit that open man, set people up. Aside from that get a good mid-range game and he will be unstoppable, adding to his floater the ability to can a 15 foot jumper and defenses will be at a loss.

I know most will look at this as a bitter negative piece but even as a fan I cannot see a team through rose-colored glasses, it’s just an honest view of what I saw this year, it isn’t based on one game its based on a body of work and a steady decline. I am still and always be a fan, and I know that if any coach can right the ship, its Coach K. Its Duke Do or Die. Thanks for a great season team, albeit a weird one.

Thanks to Miles Plumlee the lone senior this year, good luck and you have what most covet:Â  a championship season, and a forthcoming Duke degree.

Thanks to all the readers as well, we will be here all the off-season with update on recruiting and what the players are up to in the summer. Keep coming back and never hesitate to chime in and give your opinions on what you see, what you like or what you don’t like.