By Brian HoraceNovember 11, 2018No Comments 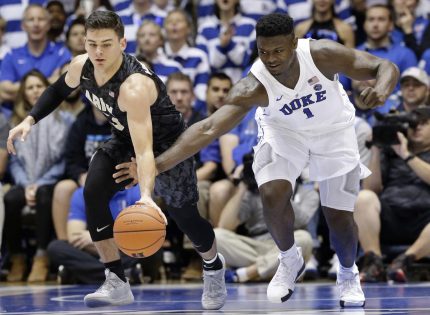 Army came into Cameron Indoor Stadium with the exact amount of fear you’d expect from members of the armed forces – zero. Army played a scrappy, but methodical game and put the first game pressure of the season on the young Duke Blue Devils. Army took it to Duke with a barrage of 3 point shots shooting 7-15 from beyond the arc and while Duke was able to match Army with 7 made 3-point shots of their own the Devils could not pull away from the pesky Black Knights. In the first half the Black Knights turned 6 first half turnovers into 12 points keeping them within striking distance at the half (50 -42).

[x_video_embed]
[/x_video_embed] Army pushed the ball on makes and misses and consistently put the Duke transition defense in precarious situations taking advantage of a lack of first half hustle. The lone bright spot for the Blue Devils was a near perfect half by freshman Zion Williamson. The 6’6 freshman forward scored 21 points off of 9-10 shooting. Zion finished the game with 27 points, 16 rebounds, 4 assists and 6 blocked shots.

Freshman R.J. Barrett did not have as efficient a game against Army as he did in his first outing against Kentucky. Barrett did, however score 23 points on 9-19 shooting. Barrett also had 5 turnovers in the game – the high for the team. As Army creeped close to Duke in the second half Cam Reddish and R.J. Barrett took over offensively Reddish and Barrett combined to go 5-9 from beyond the arc in the second half and defensively Zion Williamson added 5 blocked shots in the second half. Overall freshman Cam Reddish was 9-21 and 7-13 from beyond the arc – a record for 3-point makes for freshmen at Duke.

Tre Jones, once again, had an efficient floor game for the Blue Devils going 2-4 from the floor for 8 points but more importantly dishing 7 assists to only 2 turnovers. Jones so far has 14 assists and two turnovers in his first two college games.

Coach K made mention of the success hangover after the big win against Kentucky being a factor as well as being able to block out the noise and hype regarding the program. Duke despite the 22 point win 94-72 will have to regroup, refocus and work on quite a few facets of the game. Transition defense, which was a problem earlier in the preseason, was an issue against Army. Shot selection and communication are things that should get better with time but are things for this team to work on.