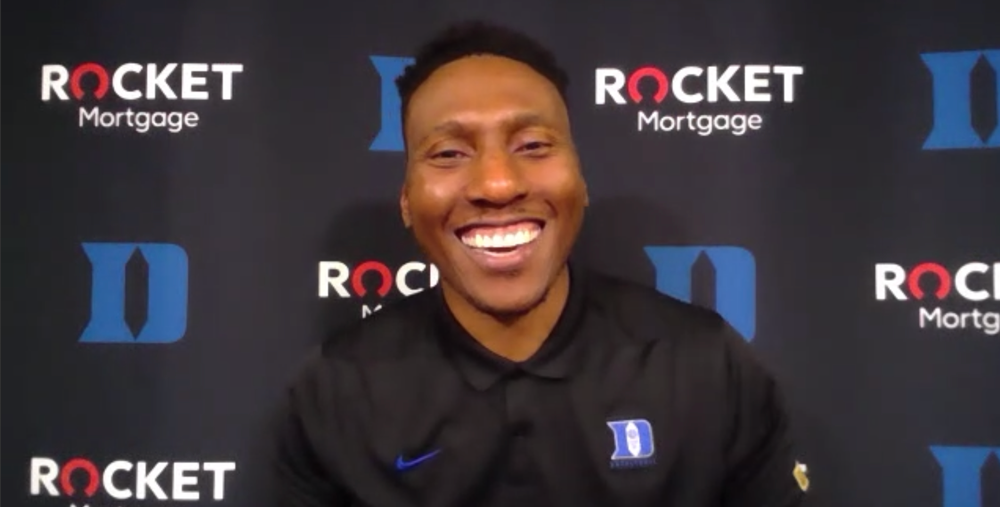 “Good afternoon everyone. Thank you all so much for joining us. I wish we were in person to see all of you sitting in front of me, but obviously circumstances are still not allowing that. But today is an amazing day. I’ve been overwhelmed with all of the texts and outreach that I’ve received today with this promotion. There’s one thing I’ll say about today – to love what you do is one thing, but to work at a place that you love with people that you love, it doesn’t get much better than that. To be the assistant coach here at Duke with Coach K, who has trusted me since 2007 when he came into my living room and offered me to come to Duke, to this day, that trust and that bond is still there. I’m honored to be a part of this program and make it continue to be great and continue to hunt championships.”

On if his promotion to assistant coach is part of his long-term plan:

“My master plan is to continue to bless others. That’s my master plan. To now step into this coaching role, that’s it. That’s the mission, is to continue to touch these players and make sure they’re achieving their goals and reaching the highest levels of the game of basketball that they can reach. That’s the plan, so now being in this position, I get to do that at a full level on the court, coaching and teaching, but just continuing to mold these young men into the best men that they can be.”

On if this promotion impacts the way that he approaches his work in the community:

“Absolutely not. One thing that coach and I have continued to talk about is the work that I do outside of Duke and in the Durham community. He always says, ‘Be you, son,’ and to continue to do that, so that work will definitely not stop and I’ll continue to be a community leader for Durham.”

On if he would have considered leaving Duke for another coaching position:

“I’m an ultimate believer in trusting the process. Honestly, there were other opportunities knocking, but the big picture for me was always wanting to be here, learning under Coach K, working with coach Jon Scheyer, working with coach Chris Carrawell – I’m with the best. I’m with the best people, the best in the business, and this was the ultimate goal. To be here and learn with this group, it doesn’t get much better than that. I’m just excited for this opportunity to learn how to scout, to be on the court and going through scouts and getting our guys prepared for games. Just the whole opportunity to do it right here, it’s the best.”

On what he is most excited for in his new role:

“I think I’m most excited about being on the court with the players. It’s been a long journey since I’ve been back behind the scenes working, not being able to be on the court, but now, I get to be out there actually teaching them. I was reading coach’s quote about me before I sat down, and he mentioned that I can still play, so I can also actually show them a thing or two now still too. I’m thankful for that. Just to be on the court with these players and teaching them the game of basketball, that’s what it’s all about.”

On how much being a part of the recruiting process in past years has prepared him for this position:

“Those opportunities, I didn’t take those for granted when I was able to get out on the road and recruit, and go to the Nike EYBL Tournaments. Those opportunities were definitely needed. Now that I’m going to be full-time and be able to get on the road, the first thing I’m going to have to do is step up my shoe game. Look, I’m telling you – that’s a big thing. These recruits, they want to see your shoe game, so I have to make sure that’s fresh and make sure my gear is fresh when we get on the road. I’m just excited to be in those gyms as a full-time coach and watch the high school players play, and look for the right fit for Duke basketball.”

On when he realized he wanted to be a coach:

“For me, my basketball plan always had coaching in the hindsight. For me, it came sooner than I thought it would. I thought I was going to play a lot longer, but due to injuries I found myself back here. My Dad coached for the Washington Bullets when he passed away. He went from a player to a coach, so that was always my vision, that when I stopped playing I would join the coaching ranks. Here I am – it’s all kind of worked out. When you’re sitting on the bench and you’re playing for Coach K, and you’re with great coaches like Chris Collins, coach Wojo [Steve Wojciechowski], coach Johnny Dawkins – you see all these great coaches and you build relationships with them – as a point guard especially, you’re watching them and you’re learning. It was always a big thing – I could see myself one day really coaching and maybe one day coaching back here.”