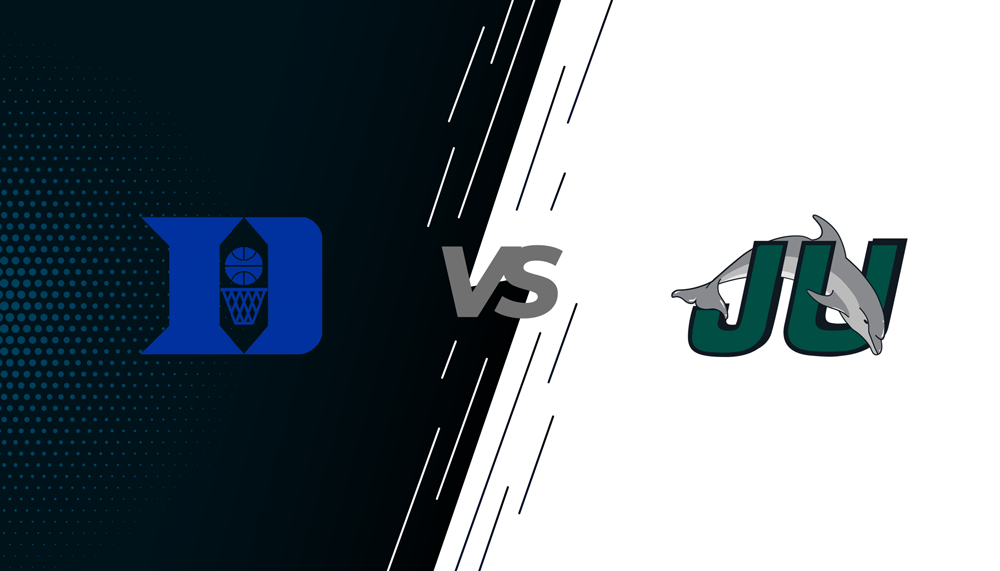 The Scheyer Era Begins with a Win Over Jacksonville 71-44; Mark Mitchell Scores 18; Jeremy Roach with 16

By Brian HoraceNovember 8, 2022No Comments

For the first time in a very long time there was a different face at the helm of the Duke Basketball vessel. Jon Scheyer coached his first game as the official head coach of Duke Mens Basketball with a cast of 11 new faces and new editions to the coaching staff. If there were nerves for the new coach, they weren’t apparent as he commanded, called plays, argued with refs and attained his first win as head coach.

Mark Mitchell and Jeremy Roach dominated the first half for the Blue Devils with Roach going 4-5 for 16 points and Mitchell scoring in a multitude of ways going 5-10 and 11 points including an alley-oop from freshman Tyrese Proctor to begin the game.

The second half started slow from both teams with the first 5 minutes only resulting in 3 buckets combined for the teams. Duke was able to feed grad transfer Ryan Young multiple times and the result was 5-5 shooting for the 6’10 forward one his way to 12 points for the game.

Mark Mitchell leads the way with 18 points in the game while captain Jeremy Roach added 16 and 4 assists. Ryan Young scored 12 points to go along with 7 rebounds – 10 of his 12 were in the second half. Freshman Kyle Filipowski notches a birthday double-double with 10 points, 12 rebounds and 3 assists for the Blue Devils on their way to a 71 to 44 victory in win number 1 of the Scheyer era.

There were clearly areas that need improvement for the Blue Devils some will come with the addition of their two missing pieces and according to Coach Scheyer one of those pieces (Dereck Lively) has a good chance of making his debut Friday. Rebounding, especially on the defensive end will need to improve as well as their overall communication defensively – with this many new additions, most of whom are freshmen, that will take time. PnR defense will be of the utmost importance and staying connected to shooters on the perimeter.  Offensively the addition of Dariq Whitehead should make the game much easier for both the interior and perimeter players. Having another slasher on the wing should open up good looks for the guards and also some easy looks for the bigs with dump offs. The win was a good for this team but until the other pieces are added and mesh into both ends and have games under their belt as a full unit we are still only seeing the cusp of what Coach Scheyer envisions.

On what Duke head coach Jon Scheyer said to the team when he called timeout in the first half:

“Jacksonville is a good team. They’ll be a tournament team this year, so we knew they were going to be in it, but we just wanted to sustain that lead that we had. It was kind of getting too close at that point, so he just wanted to settle us down and get us back into a rhythm.”

On his confidence level:

“My teammates got me going, the coaching staff, everybody got me going. Just being a junior, you have that confidence now, and I think just playing with joy and being happy out there was a big part of it.”

On the play of Duke’s younger players tonight:

“They did a helluva job tonight. Flip [Kyle Filipowski] had like 10 rebounds (12), Mark [Mitchell] had 18 [points]. They were just all over the place. [Jaylen] Blakes was a pitbull tonight. All the young guys contributed in some way.”

On his alley-oop dunk to open the scoring in the game:

“I told Tyrese [Proctor] right before we tipped off, I said, ‘Throw it – it’s going to be there.’ And he threw it and I went up there and got it.”

On his first regular season experience at Cameron Indoor Stadium:

“We just came out and tried to execute our defensive gameplan. We knew they had a really good player in [Kevion] Nolan, and we just to do what we could to take him out of the game.”

“Having Ryan [Young], J-Roach [Jeremy Roach], and Jake [Jacob Grandison] on the floor, just having their knowledge and their veteran presence always is just kind of calming, knowing they’ve been there before, and this is not new to them.”

On the team’s physical play, especially on the defensive end:

“I think that’s really been a point of emphasis from the beginning of the season, both in our closed scrimmage and that first exhibition. We were a little frustrated with the way we rebounded defensively, and we wanted to make sure that’s part of our identity as a team that plays physical and plays hard throughout the whole defensive possession and then obviously to complete the defensive possession with a rebound. So that’s something we’ve been drilling in practice and something that’s been emphasized from the coaching staff to us. We’ve got to have that reputation that it’s hard to score on us for 40 minutes.”

“First of all, it’s great to get that first win under our belts. In some ways it feels like it just happened so quick to play our first game and in other ways, feels like it’s taken a long time. And I think our guys were just ready to play a game in Cameron, a real game. Jacksonville, I was worried about them for a little while because of how solid they are defensively; they can make it hard for you to score. I knew they were returning a lot. Kevion Nolan is a really good player, there was a big key for us tonight to try to key in on him and make life difficult. But just proud of our team with how they came out and played defense and rebounded. Jeremy Roach really set the tone for us. That’s what we need him to do all year long. And I thought it was a great collective effort. Kyle [Filipowski], getting a double-double on his birthday, I thought each guy stepped up in different ways. And great to get this first one, we’ll enjoy tonight. And then learn from this, move on. Hopefully we can figure out what we can improve on and build from here.”

On his first experience taking in Cameron for the first time as a head coach:

“I’ve had a lot of friends who are coaches, obviously, and they’ve all, not all of them, but a bunch of them have sent me messages just to enjoy it. Try to enjoy it as much as I can. And it’s not easy, right? You’re anxious, you have some nerves, were you ready to get out there, start to get going. You put in so much work, you want to see it translate on the court. So for myself, I just took a moment before going out there. What an opportunity, what a moment. This is a place I’ve grown up in, playing, coaching, and to be here as a head coach, I was not going to be anywhere other than this moment right now. And hopefully I can do that, going forward through the ups and downs. But for me tonight, that was my main focus.”

“I think it’s an adjustment. For our young guys, they’re used to having the ball in their hands all the time, used to valuing scoring as the way to make an impact. And really, for us, we’ve emphasized, defend and rebound. And I thought he was a great example of that tonight. He started off probably missing a few shots he normally would hit, and he just stuck with it and made some big-time rebounds. And a couple of them translated into easy baskets on the other end. It’s a lot easier to play offense if you’re getting stops as opposed to waiting for the ball to go through the basket.”

On Jeremy Roach’s presence while on the floor:

“Yeah, I mean, he’s been in those moments. We’re not afraid to play our guys, even in foul trouble. I’m going to talk to him about not picking up a cheap one, which he did, but he has to be ready to play, whether he’s in foul trouble or not. I just think the poise that we showed, knowing when to push and when to play fast and push tempo and then also knowing, let’s really work and break the defense down and get a good shot. Overall, though, Jeremy just had a great floor game. Forget about the scoring and the passing. I just thought his presence and his poise were really key for us tonight.”

“[Our chemistry] is maybe not midseason form, we have a lot of work to do. But I think it starts with their attitudes from day one. Nobody’s been above anything. They all get along, although on the court, they push each other. It starts there for me. I think you see that on the court, the way we shared the ball. We ended up with 12 turnovers but we had 19 assists. With them (Jacksonville), it’s hard to have a lot of points, it’s low possessions. The way we’ve shared it, the way we’ve embraced doing the little things by blocking out and putting our body on the line, that’s been really important for us and I’m proud of how that translated for our first game tonight and we’ve got a lot of work to do in that still.”

• The game was the first in the series vs. Jacksonville.

• Duke out rebounded Jacksonville 44-25, including a 16-7 edge on the offensive glass. The second chance points favored Duke, 18-4.

• Duke finished with 19 assists on 27 made field goals. Seven different Blue Devils had at least one assist,.

• Duke has now connected on at least one three-point field goal in 1,154 consecutive games – the nation’s second longest active streak.

• Monday’s game marked the 491st consecutive sellout at Cameron Indoor Stadium. The last non-sellout was Nov. 16, 1990 vs. Boston College. The streak is the longest current streak (by time) in either men’s college basketball or the NBA. Duke’s record at Cameron during the sellout streak is 445-46 (.908).

• Nine players made their Duke debut in the game, including three that started – Tyrese Proctor, Kyle Filipowski, Mark Mitchell and Ryan Young.

• Filipowski recorded a double-double with 10 points and 12 rebounds, to go with three assists and two blocks. He is just the fourth Duke freshmen to record a double-double in a season opener, joining Jalen Johnson (vs. Coppin State in 2020), Marvin Bagley III (vs. Elon in 2017) and Jason Williams (vs. Stanford in 1999).

• Junior Jeremy Roach scored 16 points on 6-of-10 shooting, including 4-of-7 from three-point range. He was one three-pointer shy of matching his career high, and his 16 points matched his third highest scoring career game.

• Graduate Ryan Young finished with 12 points on 6-of-6 shooting with seven rebounds (a game-high five offensive) with a game-high three steals and two assists.

• Sophomore Jaylen Blakes recorded his first career game with multiple made three-points – he had five games last year with one three.

• Blakes finished with a career-high eight points on 2-of-3 shooting (2-of-3 from three) and 2-of-4 from the line with three rebounds.

• Duke hosts USC Upstate on Friday at 6:30 p.m. at Cameron Indoor Stadium. The game is live on ACC Network.