Why I Think Frank Jackson Made the Right Move, I know You’re Going to @ me -__- 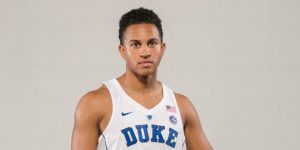 I’ve entertained many a debate as to whether Duke guard Frank Jackson made the right move jumping after this freshman year and entering his name into the NBA draft pool. The Duke fan in me, of course, would have loved to see Frank develop under Coach K and the brain trust at Duke but I also can understand his reasoning for deciding to leave.

Frank, in the NBA, would have to play the point guard position. He doesn’t have the size to cover NBA 2 guards as that position has been trending toward taller players a la Klay Thompson at 6’7 or so (on average an NBA shooting guard is between 6′ 4 to 6′ 7) . Frank, being around 6’3, would definitely be on the small side for an NBA 2-guard. Frank does leave Duke with a ton of upside and ability. Jackson is strong beyond his years, has a supremely athletic build and is quick. What still needed to develop for the freshman was his ability to run an offense, distribute the ball effectively and confidence as a passer. Was that going to get better next year? With Duke recruiting and signing a pure point guard, I’m not so sure Frank would have the ball in his hands enough to be able to improve in that regard.

Conjecture is all we really have and in my opinion Frank would have been relegated to playing the 2 guard in a 3 guard lineup. Yes, he would probably score a crap-ton of points but it really doesn’t strengthen his standing as an NBA point guard. By getting to the league quickly – a league that values potential and up-side more than a finished product – Frank is betting on himself. I see nothing wrong with being confident in your ability to improve in an arena where you can focus solely on basketball and get paid to do it.

It’s hard to not look at his decision through any other lens than a college basketball fan, because we all know what Frank Jackson is capable of. At first I didn’t really think him jumping early was a good idea but as I started to really look at what his freshman year was like and his situation both in Durham and possibly in the NBA I started to really see his side of things. Some will paint it as Jackson fleeing Duke because of Trevon Duval – it’s not that.  Honestly, Jackson may have been a top 2 scorer on this team – he Trevon Duval and Grayson Allen could have possibly been the best back-court in the country. It’s a matter of development, team need and what is going to get him to where he needs to be. Duke needed Frank to be one thing, and Jackson’s future really depended on him being something different.

Whether young Jackson goes first, second or fails to be drafted, he put his money on his aptitude and abilities. It doesn’t constitute a failure – it’s just a different road towards the same goal. I can’t be mad at that, hopefully others can see that as well.