By Brian HoraceJanuary 8, 2014No Comments 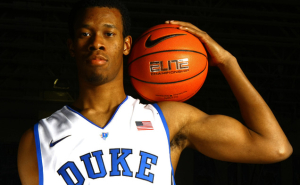 Duke needed a strong second half to put away the Georgia Tech Yellow Jackets last night 79-57. Duke seemed listless and a step slower than Georgia Tech in the first half, allowing the Yellow Jackets to shoot over 50% from the field while Duke shot only 36%. Despite the disparity in shooting percentage Duke managed to garner a 1 point lead at the half due to an edge in free throw makes in the first half 14-0. Duke was only 2-8 from beyond the arc so continuing to attack the basket was crucial for the Devils.

In the second half Duke stepped up the defensive pressure on Georgia Tech – only allowing 24 points, while scoring 45. Georgia Tech never did make a free throw in the game and Duke managed to get the ball to go into the basket shooting 58% from three-point range in the second half. Duke got 5 three pointers from Rodney Hood who would lead all scores with 27. Hood scored 15 of his 27 in the second half when Duke would finally fight off the pesky Yellow Jackets. Duke would out rebound the Jackets by 8 but it should be noted they were without their best rebounder Robert Carter Jr due to injury. Amile Jefferson would lead Duke in rebounding with 10 and also give Duke 6 points as he scratched the starting line-up replacing senior Josh Hairston. Also cracking the starting lineup, and continuing his resurgence was Rasheed Sulaimon. Sulaimon would give Duke 11 points and 5 rebounds and seems to have shaken off whatever was causing his earlier decline in play. Sheed would make both of his 3 point shots and seems to have regained his Blue Devil swagger.

Quinn Cook did not shoot a great percentage but he was there when Duke needed him scoring 13 points and dishing 5 assists to only 1 turnover continuing his solid play this season. Jabari Parker wasn’t a huge factor for Duke in this game, the freshmen has been in a bit of a slump his last 2 games but did contribute 12 points and 6 rebounds in 21 minutes of play. Parker would go 4-12 and 0-2 from the three-point line and seems to have hit the proverbial wall with a lot of his shots front-rimming and what seems like a lack of lift and legs on this drives to the basket.

Duke still has a lot of improvement to make on the defensive end but the second half of this game is a step in the right direction, Duke will have to start games with much better energy than they did in the Georgia Tech game or there won’t be much of a home-court advantage. If Duke can string together a few more minutes for Marshall Plumlee who did have a nice block vs Georgia Tech it would be much better for Duke’s defensive scheme.

Jabari Parker is clearly hitting that freshman wall, and I see two ways to approach his lack of production: Let the freshman play his way out of it, or perhaps get him touches in the paint off of guard penetration, it would at very least give him point-blank attempts at the rim and perhaps boost his confidence. It may work better for him to go inside-out instead of taking the outside shots first, then trying to work his way in. Its nothing Coach K hasn’t seen or dealt with before, the ACC season is a grind and winners are forged in conference battles. I love the comments that Coach K made regarding Jabari and is process, pretty spot on, Duke fans should pay close attention to these words:

On Parker’s growth process:
“It’s unfortunate that the way our game is, men’s college basketball, puts so much on some of these young, extremely talented players to produce at a level that they’re not ready to produce at – but they will produce at some time in their life, hopefully while they’re here. They’re good – [Andrew] Wiggins, [Julius] Randle and Parker. They’re 18, 19 years old. They’ve never played at this level. They’ve never played the physicality. They haven’t been as closely scrutinized as everyone’s closely scrutinizing them. They’ve been promoted and marketed as way beyond what they should be. But that’s the way it is. So it’s difficult, it is difficult for him, and those other kids, too. We have to understand that. People ask me, ‘What’s wrong with Parker?’ What’s wrong with him? He’s played great this year. He didn’t play well in the last game, he played pretty well tonight, a little bit better. It’s a long season. [Derek] Jeter doesn’t hit .950. And he’s there every day. LeBron [James], Kobe [Bryant], and all these guys, they lose, they play poorly. But in college basketball, those kids, it’s like no, they’re supposed to be instant. It’s not instant. Nothing is instant. And so I’ve got to make sure that we don’t let that pressure get to him, to where he loses the ability to have fun. He plays the game because he has fun playing it and he’s a great kid. Still a kid. And he’s not surrounded by [Mason] Plumlee and [Ryan] Kelly. In some respects, he’s a little bit out of position because if I had a bigger team, I’d be playing him on the wing, which is probably eventually what he’s going to do. So he’s learning a whole bunch of things. As he’s doing that, we’re still Duke and everyone expects us to be perfect, win everything and look great while we’re doing it. And it doesn’t happen that way. This is a work in progress and I want to coach him that way, without putting that extra pressure on him.”

Quinn Cook and Rodney Hood seem to be assuming the leadership roles on this Duke team so far. Cook is a motivator and hype man in addition to being probably the most consistent player for Duke this year. Rodney Hood is slowly becoming more of a vocal leader, which is what Duke is desperately in need of. His abilities speak for themselves and Duke is going to need him to step it up on the defensive end to match his offensive abilities but it’s clear he has the respect of his teammates and that will be high for Duke as the conference season rolls on.

I had mentioned earlier that I would like to see Sulaimon in the starting lineup and it’s clear things are clicking for the sophomore, this is another huge thing for Duke.  Sulaimon can be  Dukes legit 3rd or 4th option depending on the night and he is carving out his space and earning minutes for Duke and making the most of them. 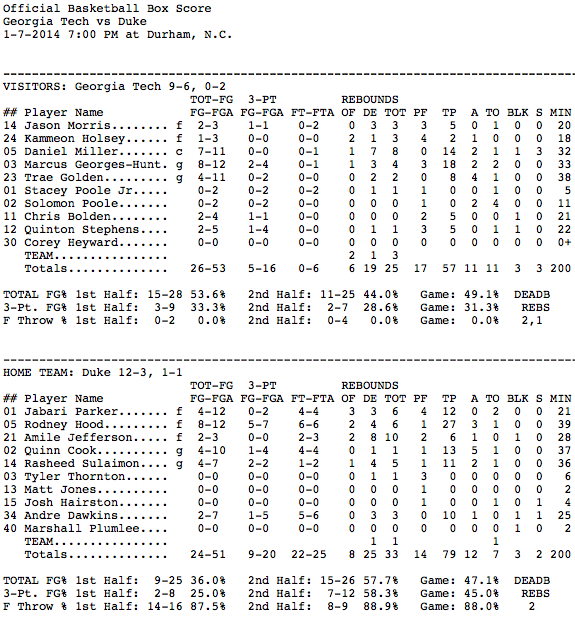