By Brian HoraceFebruary 3, 2014No Comments

I think I tweeted something to the effect of:  usually when Duke loses I’m pissed and upset but after this loss, not so much. The reasoning for my optimism is due to the way this team played. Yes, losing to Syracuse on the road by 2 (91-89) in overtime sucks, but it wasn’t expected to be this close, much less this much of a game. It’s rare that a team wins in the Carrier Dome, very rare, and Duke had several chances to do that. A couple of balls bounce their way, a couple of questionable calls that could have gone either way reverse and they win this game.

Beyond the wins and losses what a coach wants to see is fight in his team, he wants to see grit, determination and most of all progress. Coach K got all of that on Saturday night. He got what he asked for, a team that did not fold on the road but rather played great basketball. Even with the foul disparity and Duke losing arguably the two most important players to that  foul trouble, Duke still had a great chance in this game.

Everyone wants to talk about the calls that were missed, but that is how the game goes sometimes. Yes I thought Christmas flopped a’plenty, in fact I know he did. Clearly there was a foul on Hood on the dunk attempt, even with all of that Duke had chances down the stretch. Duke could have been a lot more aggressive and I feel that lack of aggressiveness steered the refs, at very least on the Hood dunk, to give the benefit of the doubt to Syracuse.

There is a lot to build on in this game. Rasheed Sulaimon was a stud scoring 16 points and running the point guard stop for Duke some in this game. Because he plays a more attacking style it matched up well against the Syracuse zone. Sulaimon also had 6 assists to only 1 turnover and hit the last second 3 to extend the game into overtime. While a lot of people are clamoring for Rasheed Sulaimon to be named starting point guard. I understand with how he played this game, but I’m not one who believes that necessarily, I definitely see more time at the point for the sophomore who has played the role in late game situations in some games this year. I’m not sure it’s an every game thing, I’m still in favor of Quinn Cook at the point. Cook did not have a great game shooting the ball but 5 assists and no turnovers is not a bad game. Cook also played 40+ minutes in the game and the zone for the point guard isn’t conducive to great shooting, he didn’t have the benefits of getting too many shots in rhythm. I think Duke is fine as is, perhaps a platoon of Cook, Sulaimon and Thornton. Jabari Parker did not shoot the ball well, but he gave Duke 15 points. Parker was stopped at the rim a few times but the Syracuse front line but found his way to the basket a few times. There were still some issues with shot-selection for the freshman, sometimes settling for contested jump-shots instead of passing the ball to open teammates.  Still Jabari played well and Duke would need his point and every one of his 9 rebounds. Parker would eventually foul out on a questionable offensive foul call leaving Duke shorthanded. Duke would also lose Amile Jefferson, the most productive and essential player at the big man spot.

Duke did a lot of things well in this game, and there were a lot of things to correct as well. They were out rebounded but not by a margin that would indicate a lack of effort. They still need to get more from the guard spot in my opinion as far as rebounding goes and need to definitely look to use Amile Jefferson as more than just a rebounder, he is fully capable of scoring the basketball more than he has shown.  This will be more apparent as Duke faces more traditional opponents.

All in all I think that this game, even with the loss is a step in the right direction. Duke will not face too many opponents that are on par with Cuse and played then damn near evenly on their home floor. Coach K, I assure you, is not unhappy with this team. 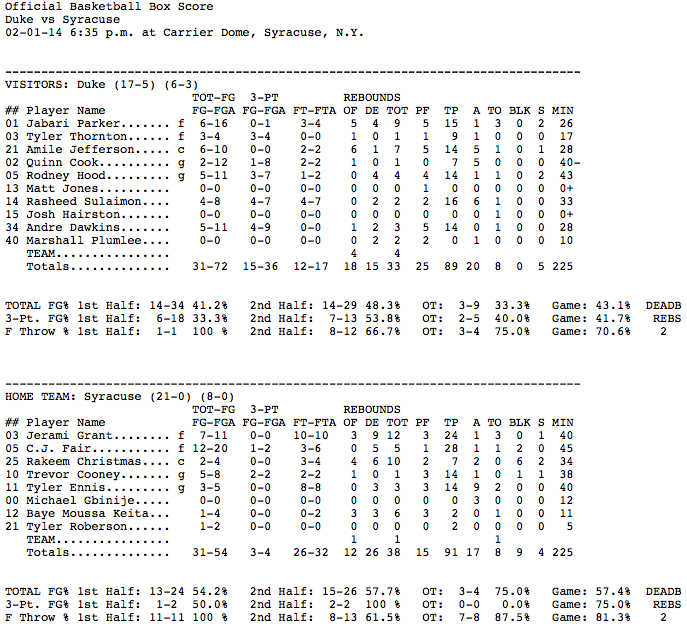 P.S. One last note on the Hood no-call, if you are going to have new rules where if you breathe on someone it’s a foul call, please make sure that it is called both ways and plays at the rim should be based on the play. I for one have been disappointed in this years officiating. I didn’t like the new rules much at all when the season began but accepted it as we have to as fans, but when the officials began to get selective about utilizing the rules that just sort of pissed me off. I will say that Duke along with a lot of teams have benefited and been harmed by it. Just a little consistency is all we are asking for. If it’s a point of emphasis, then please emphasize it the entire year and don’t disregard it simply because the outcome of a game is in question.