My Thoughts on the Nike Hoops Summit from Yesterday

By Brian HoraceApril 13, 2014No Comments 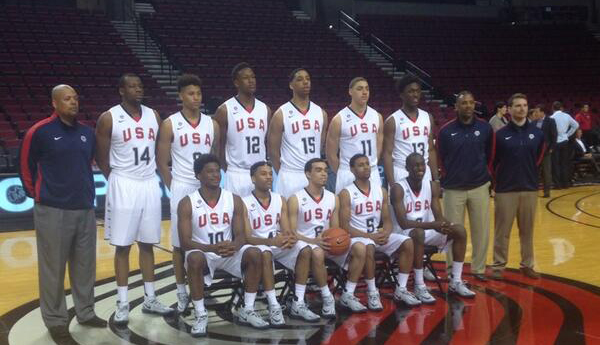 The first quarter of the hoops summit was a bit sloppy to say the least, the US did not have a plethora of good shooters on the roster so the zone that the world team used was an excellent idea and seemed to slow the US team down to start the game. The world team has an electric athlete in Emmanuel Mudiay but what he will learn under Larry Brown is to make the easy pass, just little things that will make him a star and a more efficient guard. I only mention it because clearly Mudiay is a one and done so his timeline for improvement is shorter than Tyus Jones who may be a multi-year player. The US did not defend the perimeter very well and the World team got up some open shots from deep. The US would go down by 8 points but rallied with some mid-range shots from Justise Winslow and a nice 3 point play by Theo Pinson after one period of play the World would have a 5 point lead. (18-13).

Aside: It funny to me that the biggest hype men on the planet (ESPN) complaining that we hype up the us players..lolz at that.

Aside: Lot’s of debate from the twitterverse regarding Tyus Jones vs. Emmanuel Mudiay. Mudiay may be the most explosive guard in the country coming in to high school, he is basically a small forward who handles the ball. It’s a fair debate but these two guys do different things on the court. Tyus is obviously smaller but a better passer, shooter and game manager, much like a surgeon on the court. Mudiay is more like a specialist, he’s a guy that needs the ball in his hands, he is an athlete that is going to drive and dunk on you and man is he fast. His first step is impressive and he gets to the basket with ease, carves up the defense. So it really depends on what you are looking for in your guard. Each guy is going into the program that will best utilize his skill set. Mudiay is however improving at a very rapid rate. Tyus Jones will serve himself well by continuing on his path of getting stronger…and he is.

The US in the second quarter started to put together some very good looks on offense getting some inside shots, a couple of strong moves from Jahlil Okafor who is going to be a bear underneath and will draw double teams on the regular. Duke will rise and fall with how Okafor handles those double teams. The inside play in the second quarter would allow the US shooters a little room to get shots off from the outside. Oubre and Blackmon knocked down some tough jumpers to stretch the defense out even more.

After a quick shot by Brandone Francis of the world team the half ended on a Justise Winslow 3 point this to give the US the 44-38 lead at the half. Winslow would go 6-8 for 14 points at the half.

Aside: Karl Towns is a very impressive player, I’m not sure there is a such thing as a stretch 5 but Towns can do it all. He has impressive post moves – a part of his game that I hadn’t seen before – and also can defend the post, he is a pretty damn good shot blocker, doesn’t get himself out of position. Weird to say but he is very light on his feet, moves well. Needs to be stronger with the ball but he’s going to be a nightmare.

The third quarter saw the world team close the gap on the US in fact tied the game. Impressive with Karl Towns on the bench.

The fourth saw these teams going back and forth, the game got a lot more physical, the bigs seemed to take over and points in the pain became much more important.

The difference in the game if you ask me was the Duke triumvirate. The entire game Tyus Jones was the consummate on court leader, he got steals, made shots and great decisions when setting up his teammates. Jahlil Okafor was the most impressive post player in the game, he didn’t wow via the dunk as Cliff Alexander does but he did a very good and steady job of using his feet and making plays when he had his opportunities. Mr. Do-it-all Justise Winslow did a little of everything Justise battled inside against bigger guys going for rebounds, he hit tough shots in the lane, he made hustle plays on both ends of the floor. He very well could be the most important player coming it next year with his ability to play and defend multiple positions.