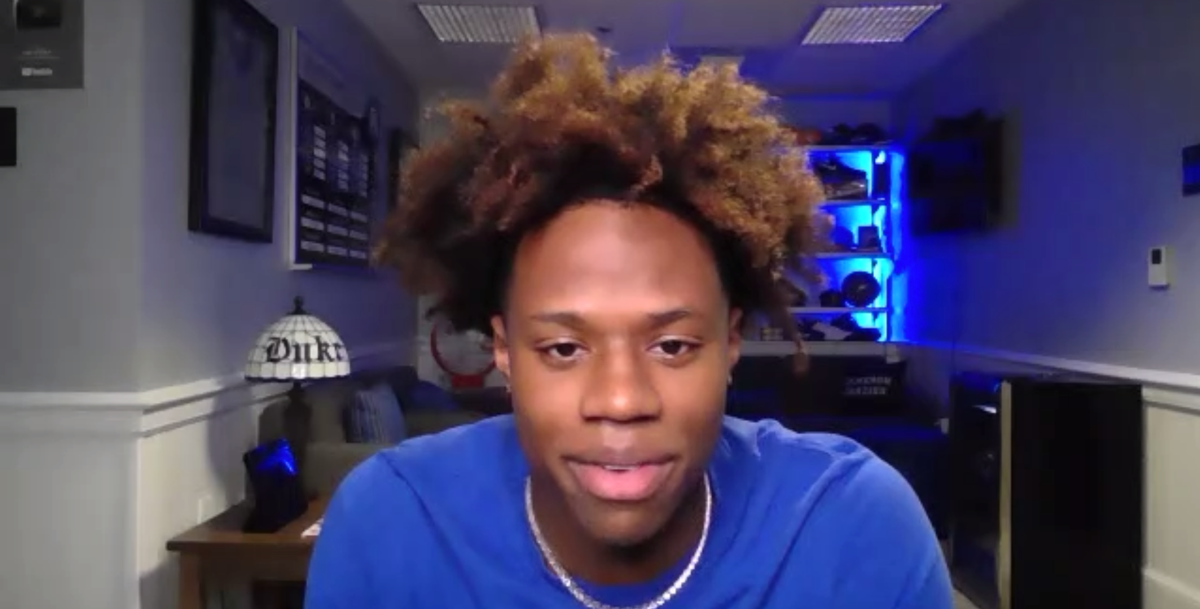 By Brian HoraceOctober 13, 2020No Comments

On the eve of practice beginning officially, DJ Steward answered some questions and previewed the season. He also discussed how he and his fellow freshmen are adjusting to college life in a pandemic, and what he’s learned from his fellow Chicago natives – Mike Krzyzewski, Jon Scheyer and Jahlil Okafor, who also attended Whitney Young HS.

Steward, a 2020 McDonalds All-American, averaged 22.5 points, 3.5 assists and 4.1 rebounds as a senior. He enters Duke as a five-star combo guard that was ranked as the No. 23 overall player nationally by ESPN in this freshman class.

On how his acclimation to campus and the team have been so far:

“Everything has been great so far. I’ve really been enjoying everything, getting to know the team, the coaching staff and just getting to go around campus a little bit. The little commute that we make from the Washington Duke has been pretty great. Everything is great so far. I’m really just settled in now, getting used to live in the Washington Duke and just having a great time with my teammates.”

On how difficult it would be to defend a lineup with him, junior Joey Baker and sophomore Matthew Hurt on the floor:

On what the returning players on the team have told him to expect at Duke:

On what was the deciding factor during the recruiting process that made him want to play for Duke:

“What was big for me was when the whole entire coaching staff came to visit me at my high school, Whitney Young. That was really big for me. They sat down, they talked to me and of course, I had the relationship where coach [John] Scheyer is from Chicago and also Coach K, so that was pretty big for me as well.”

On what players have impressed him during the team’s 5-on-5 practices:

“Matt Hurt and also J Gold [Jordan Goldwire], but I’ll speak on Matt Hurt first. Matt Hurt is a really good player. He’s definitely gotten a lot better, according to what Coach K has said and he’s just an amazing shooter and an amazing scorer. I’m really excited to see what he does this year. J Gold has really been leading for us as well, really defending, handling the ball without having any turnovers, so he’s been really big for us as well. He’s also been pretty much leading me on the court and telling me where to go, and just letting me know how Duke’s going to be and how we’re going to play.”

On how long he played football for and how it has translated to his abilities as a basketball player:

“I first started playing football when I was about five years old. I played up until when I was 11, then I stopped and I came back my freshman year and played football. I was a wide receiver and a safety. It really helps me [with my] instincts, knowing where to go and just playing the ball like a safety defensively. Then, toughness as well. You have to be tough in football, just knowing where to go and knowing what’s around because if you get hit and you’re not aware of what’s going on, then it’s going to hurt even worse.”

On possibly playing without or with limited crowd:

Yes, most definitely. Communication is something that’s really big for us so we always go out there with a lot of energy. Coach Will, he’s a great strength coach an he’s always bringing energy every single day, so it starts with him and it just comes to us as well. That’s our motto, just to bring energy every day and just go out there and play with fun.

On who his favorite Chicago player is from Duke and overall player from Chicago:

Jahlil Okafor as far as my favorite Dukie for sure because he went to Whitney Young (HS) and just hearing his story and his story getting out. My favorite player from Chicago, probably Derrick Rose, I love his game.

On how he would describe his game and what player comparisons he has heard:

“I’m a combo guard. I can play on or off the ball. I can shoot it pretty well and attack and play make, and play great defense. Players that I get comparisons to are Lou Williams, CJ McCollum and a little Ja Morant.”

On how he has been used on the court so far and what skills have translated from high school:

“Coach K, he has me playing on the ball and off the ball, which is great because he can mix up the lineups – J Gold [Jordan Goldwire] and me, Jeremy Roach and me, sometimes me and Wendell [Moore Jr.] out there on the court at the same time. It’s actually interesting for me to just know where I can play and where I could fit in. What’s translated well for me from high school is just playing off the ball, coming off of screens and knocking down shots, playing great defense, getting my hands in the passing lanes and just always being in attack mode as well.”

On how he spent his time during the quarantine period:

“Just staying positive every day. The coaches contacted the players a lot. We had our own little group chat going for the freshmen and then it expanded into the whole entire team. We had Zooms where we could get to know each other a lot more before we got down here, which helped a lot. Then, as far as me, I had access to a gym and a weight room, so I was able to pretty much get in the gym every day and just work on my game.”

On his positivity how he has integrated into the locker room so far:

“In the locker room, I’ve mixed in with pretty much every teammate really well. I can connect with them in some sort of way, and it’s actually great talking to just anybody. How I move in life – I just move positively, always smiling and having a positive attitude about everything.”

On what he thinks the identity of the team is:

“Like we’ve been saying, [we’re] a deep team that can play in transition, we can play really fast and also make shots as well. We’re going to be able to make a lot of shots.”

On who’s got the best social media game on the team:

I’d say Mark (Williams) how he uses his instagram his Tik-Toks, his emotion comes out, how he acts comes out and it’s very authentic