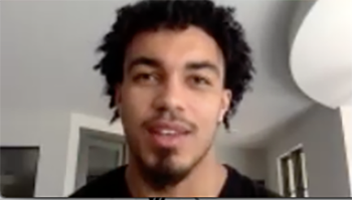 Tre Jones on the Draft, his Time at Duke & More

By Brian HoraceMarch 27, 2020No Comments

Tre thanked the first responders and medical staff across the country and said that his family is doing well and that he’s helping out so they don’t have to risk exposure during these times, here are some selected questions from todays media call.

On what he thinks he improved on the most in his sophomore season:

“I think that starting off with just leadership, it was something that coach always talked to me about even in recruitment before I got there. All the coaches helped me with my leadership this year. I feel like through adversity and through the ups and downs, they were all just trying to bring the most out of me as far as leadership goes. I feel like being a vocal leader is something that I grew a lot in this year, just trying to talk more whether it’s in the locker room, on the court, practice, games – whatever it was, just trying to talk more, be more of a vocal leader. I had to just let my actions do the leadership. I feel like a lot of different aspects in my game grew this year. I feel like I was able to show that I can shoot the ball much better than I did last year. I think that was one of the biggest things that I improved on this year.”

On what he will miss the most about Duke aside from basketball:

“I think just the people there, really. Ever since I stepped on the campus, it felt like home to me. Those people around there embrace everyone that comes there and everyone just wants the best for you, not only from the coaches and the staff, but it’s all around the team, the professors, around the campus – it’s everyone. Everyone just wants the best for you and they make you feel a lot like home.”

On how he plans to prepare himself for the NBA draft during the COVID-19 pandemic:

“I think it’s definitely different [and] something that no one’s ever dealt with, so it’s kind of weird right now. I think just trying to stay in shape, trying to continue to do the things from home that I can do. I’m staying with my brother (Tyus) right now, so I get to work out with him as much as we can and do as much from home that we can. I’m trying to just stay ready whenever the moment comes that we do get to work out for teams or whatever it is. No one really knows yet, but I’m just trying to stay ready so when we do get over this as a country and as a world, I’m trying to not take any steps back and keep taking steps forward in this process.”

On whether the Duke staff has been helpful during the process:

Any questions that I have or need help with they said they’d be there but no one really knows what’s going to happen or what the future holds, its just kind of up in the air right now and we are all just trying to be patient.

On what he will take away from playing under Head Coach Mike Krzyzewski:

“I don’t think there’s really one story that I could take from the two years with him. I think it’s just how competitive he was, how he wanted to get better every single day. He never took any days off. He spent so much time around the game and he shows how much he dedicated and how much it pays off by being that dedicated and that bought in to the game of basketball. My takeaway is just completely being all in on whatever you’re doing because at the age he’s at and what he’s accomplished there and just in the basketball world, he could easily come in every day, be relaxed, not care as much anymore, but he seemed to have more fire every single day and more fire in year two than he even did in my first year. I think that was my biggest takeaway.”

On what his favorite moments in his career were:

“Definitely winning the ACC Championship. The tournament has got to be up there, just being able to win a championship. The game at UNC [this past season] definitely is going to be a favorite – just the rivalry and then the way it ended and everything was crazy. Those two games for sure, but there’s so many memories and moments that definitely stick out.”