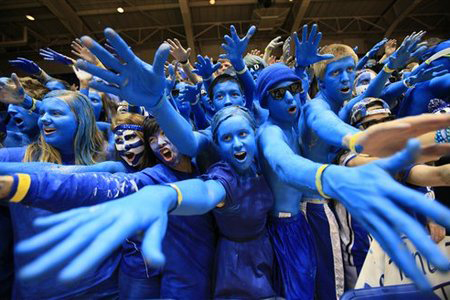 Very cool charitable partnership between the V foundation for Cancer Research and PVH Corp. The V Foundation Neckwear Collection is a line of ties inspire by memorable current and past sports figures. They will be on sale beginning February 15th. There are ties inspired by Coach K and Dick Vitale which they will wear during games in mid February. Here is more about the partnership:

“The opportunity is multi-dimensional,” explained David Sirkin, President Neckwear, PVH Dress Furnishings. “We have the ability to support an important cause, create an emotional connection with our target consumer regarding iconic sports figures, as well as fill a void in the market for conversational neckwear.”

“I’ve been a supporter of The V Foundation for a long time, and now, through my association with ESPN, I’m really excited to be directly affiliated with it,â€ said Jerry Rice. â€œI had the honor of collaborating with PVH Corp. on this really unique charitable initiative by designing a tie to benefit The V Foundation. I love my tie, called â€˜Jerry Rice Worldâ€™, and the entire Collection.”

For more information about the partnership between PVH Corp. and The V Foundation as well as details on where to purchase the The V Foundation Neckwear Collection, please visit www.jimmyv.org/vties.

Media Contact: Torrey Winchester
torrey@intrepidmg.com
918-638-1413
About The V Foundation
The V Foundation for Cancer Research was founded in 1993 by ESPN and the late Jim Valvano, legendary North Carolina State basketball coach and ESPN commentator. Since 1993, The Foundation has raised more than $120 million to fund cancer research grants nationwide. It awards 100 percent of all direct cash donations and net proceeds of events directly to cancer research and related programs. Administrative and fundraising expenses are paid by the Foundation’s endowment. The Foundation awards grants through a competitive awards process strictly supervised by a Scientific Advisory Board. For more information on The V Foundation or to make a donation, please visit www.jimmyv.org.