By Brian HoraceMarch 5, 2014No Comments

Very poor performance by a team coming off of a long break that was supposed to be filled with working on things but what translated to a team that was completely lost on both sides of the floor. Out hustled and out hearted. I wont go into stats but what I will go into is how this team completely falls apart offensively. Guard play for Duke has been a serious issue as of late and more often than not Duke ends up depending on long jump-shots which as fans we all know is a recipe for disaster.

Having offensive meltdowns is something that a lot of teams can overcome because they get stops, well, Duke does not do that at a high enough clip to make up for a 5 minute offensive drought. You have to give Wake credit for hitting shots and outworking Duke who just didn’t seem like they ever arrived.

Stats wise (I know I said I wouldn’t, so I’ll keep it short) Duke really wasn’t that far off. Turnover wise they lost by 5, rebounding they won by 2. Free throws however, 12 makes to 25 for Wake Forest.

Duke has be tougher, simple as that heart isn’t something the coaching staff can infuse, it is something you need to bring to the table, you cannot phone anything in this time of year. At this point of the year freshmen are sophomores, sophomores are  juniors and so on. No excuses at this point, Duke has played in close games, they’ve played in tournaments. It’s time for those experiences to to yield fruit.

I tweeted earlier my thoughts:

It’s very simple for Duke going forward. Get tough or get beaten. Champions are not prima donnas but primal. Each player needs to sack up!
and also

I love my team but losing to a team you are supposed to be better than is a little troubling for fans when that’s sorta how tourneys work. 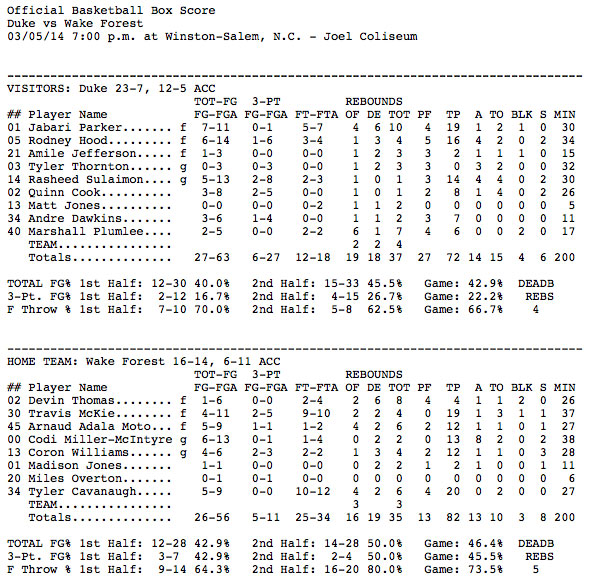