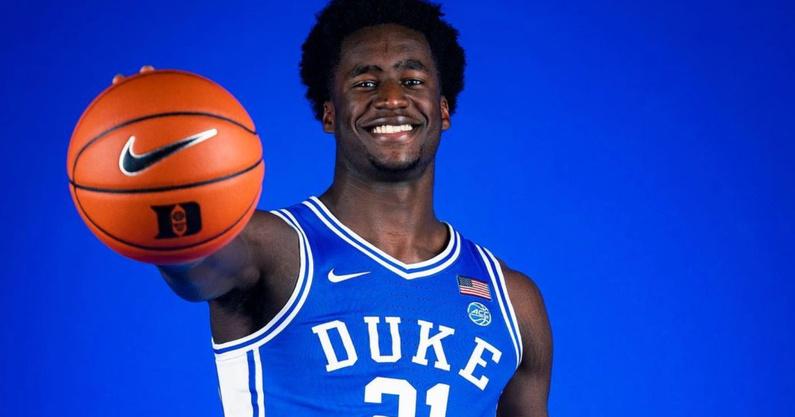 By Brian HoraceOctober 9, 2021No Comments

With AJ Griffin reportedly sustaining a right knee sprain in practice what could and should the Blue Devils do to offset the loss (albeit a temporary one by all accounts)?

Duke should be ok with AJ Griffin missing some time. This is still the the pre-preseason and it could set back AJ’s development a bit, he’s, by all accounts been a very good student of the game since his arrival in Durham and the Blue Devil staff will only put the young man in a position to succeed – Duke has always done that for players coming off of injury.

On the floor the Blue Devils  are afforded the luxury of  having big guards and more specifically freshman Trevor Keels and junior Wendell Moore – Duke’s very own Swiss Army knife. Moore at 6’5 and roughly 215lbs has a strong mature NBA-sized body should be able to slide into a small forward spot easily. By all accounts Moore has been the most impressive player in this early portion of the year aside from freshman Paolo Banchero, with K and staff remaking on how he’s improved his athleticism and his body.

If Duke was to have to play today the starting lineup would most likely consist of Jeremy Roach, Trevor Keels, Wendell Moore, Paolo Banchero and Mark Williams. Which very well could have been the lineup regardless of the Griffin injury. Where Duke would feel it is in the depth department – it would mean extended minutes for the 3 guards and could call freshman Jaylen Blakes into a few more minutes at the backup point guard spot instead of Wendell Moore as well as Joey Baker at the small forward spot. These aren’t  bad things necessarily. Duke would lose out on the athleticism that AJ possesses – that explosiveness coming off the bench isn’t something Duke can necessarily replace but Moore is definitely a player that can offset this and he’s used to playing extended minutes – Baker would most likely be the first off the bench and if he does regain that shooting touch of his sophomore year where he shot just under 40% he definitely brings a different look to the floor and we already know the energy he brings.

In the long run, if Griffin’s injury is as stated, something on the milder side, this could actually do some good as far as the development of others going forward. Having to contend with moving others into more prominent roles could pay dividends once ACC season starts. The meat of the season when things are grinding is when you truly need that depth  and having Joey Baker and Jaylen Blakes getting starter or first-off-the-bench work in scrimmages and practices may give the coaching staff a bit more confidence in using both in game.

The only worry is the mental aspect for AJ, coming off of a severe injury and missing the time he’s missed, having this setback has to be daunting for the youngster. Duke will of course be as cautious as possible with the young man, who is in the best possible place for rehabbing and recovery. Duke has an excellent staff and are acutely aware of not only the physical but mental aspects of recovery. We wish AJ well and a speedy recovery both mentally and physically.