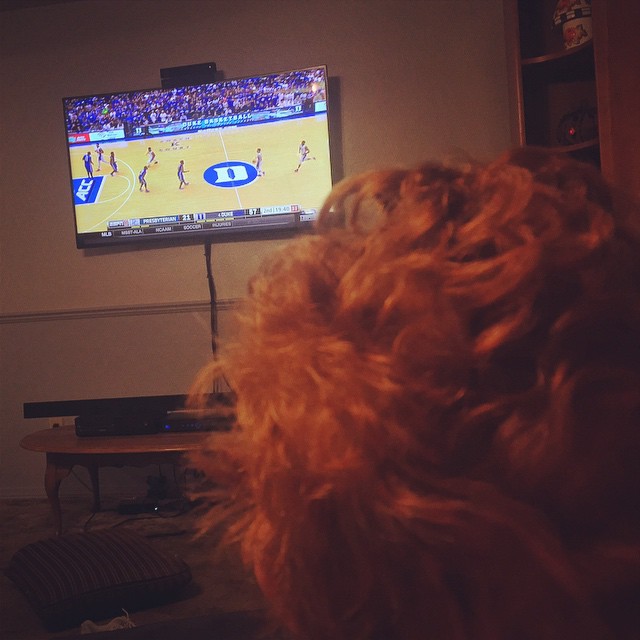 Appreciating Moments, or Why Duke Twitter Should Stop Whining

By Brian HoraceFebruary 20, 2020No Comments

It was a church league game and we were down by 20 at halftime. The clock was ticking towards the break, and I had the ball at mid-court, with absolutely no business either dribbling or doing what I was thinking about doing, which was shooting a 45-footer with 8 seconds left.

So I launched it.

It only took two seconds off the clock, but I’ll be damned if it didn’t go in. Our teammates went wild, and the other team took the opportunity to run the length of the floor and get a layup, increasing our deficit yet again before the buzzer sounded.

It was a fun moment, but the special part of it would come a few games later, when a friend of mine brought her five year old up to me before another game. She said, “He wants to say hi. He saw you hit the half court shot a few weeks ago, and he’s never seen anyone do that before. He loves basketball so much.”

Her kid, looking at the ground the whole time, beamed up at me and said, “Hi.”

Tre Jones had just shimmied and juked his way into a layup before the buzzer sounded. Amidst a celebratory scramble, Markell Johnson dribbled halfway up the court and launched one. I had just pressed the button to power off my Xbox, and I thought, “No way.”

I hit the clear button just in time to watch the shot catch the right angle off the glass and drop in. I waited for the replay to confirm what I already knew. Good. The deficit once again extended. I sighed.

But there on my chest, my son also watched the path of the ball. There was no visceral reaction to it banking in, as he’s not old enough to appreciate the game yet like I do, or like that young man who said hi to me a decade ago. But he watched it go in. He wasn’t watching Baby Shark, or playing with his toy sharks, or looking at a book about sharks. He was watching that half court shot. It was a moment.

Isaac, my almost three year old, and I don’t really get along. I can’t stand kids for the most part (I get along with them when they turn 13 or so), and all he does at this point in his life is watch Baby Shark and screech all evening if he doesn’t get chicken nuggets, “mamma cheese” (Mac and cheese), and milk at bedtime. He is thoroughly useless to me as a person, save for the fact that I helped create him and I get to claim him as a dependent.

Last night I cranked on the Duke game and sat back to watch the first half, knowing that I was going to bed at 9 p.m. regardless of the score or how the game was going. Halfway through the first half, Isaac walked in, binky firmly in place (we only let him have it at nighttime or at nap time, because if we don’t, guess what, he screeches), and cup of milk in his hand.

I told him good night, and he waved at me, then turned to my computer monitor and did the most surprising thing I’ve experienced so far in his life. He screamed, “Basketball!” and ran to my recliner, got up in it with me, and sat down to watch Duke being ripped apart by an unranked State team who was playing like it was the national championship.

I’ve been fortunate enough to share a Duke game with another one of my sons sitting in my lap, and I know that it is a rare moment indeed, and one that I need to appreciate because after this one, it’ll be grandkids (hopefully a long time from now).

I checked out Duke Twitter, and immediately logged back off. I’m not sure how my “what you’ve missed” feed has become inundated with a bunch of petulant little Nancies, but every time we get behind by more than a couple of points, I see more lamentations than Jeremiah wrote.

Look, I get that Twitter is supposed to be polarizing, and I get that most of you have to be polarizing in order to gain a following and feel like you’re being heard. I was there at one point in time also, and from time to time I still check in to give a hot take that I know will send my 13 followers into a tailspin of existential dread. Hell, that’s why I’m writing this.

So here’s my take: Why are we not letting these kids have their moments? Just two short weeks ago, most of us got to witness a miracle in that win at Chapel Hill. I myself came up out of my recliner, screamed at the television and scared the very same almost three year old so bad he cried for the entirety of overtime. Duke Twitter was a live wire, running hot with rabid anti-fouling remarks and congratulatory messages amongst fans.

You need to learn to appreciate the moments. What they teach you. What they teach these kids who we’re all emotionally invested in. Rest assured that these kids are playing their hearts out, and yes they get tired, or they go through slumps, and in all honesty when was the last time when you gave 100% every. single. day at your job or at school?

I was disappointed this morning when I saw the final score on my phone. But I checked my Twitter notifications and I saw that my tweet had at least been seen and appreciated by a few folks. I was reminded once again of the moment that was given to me last night. The moment when my son chose a Duke game over Baby Shark, a Duke game over bedtime, and a Duke game over his milk. He cuddled up next to me, eyes focused, clearly avoiding bedtime, but also not realizing this is the one way I’d let him get away with it.

Tonight my almost 3 year old climbed in my recliner, pointed at the Duke game, and said, “Basketball!”

This is the first time he’s ever done that. He’s stolen my headphones, he’s avoiding bedtime, and he’s watching my Blue Devils get stomped…but none of that matters. #GoDuke pic.twitter.com/StpvVOGOxj

Be better, Duke Twitter. Appreciate your moments. Appreciate that these kids are on the court, learning lessons, and giving us all a reason to feel emotionally connected to something most of us probably have no business being emotionally connected to. And if you can’t do that, well, I guess I can do what some of you have probably been saying all along, and smash that unfollow button.

Oh, and can we get rid of those damn uniforms?

You can find (or block) Travis on Twitter at @tstyles77