Behind Zion’s Return, 2019 ACC Tournament Tickets Are Most Expensive This Decade

By Brian HoraceMarch 15, 2019No Comments

Regardless of what you think of Duke or Coach K – Zion Williamson is a headliner. Everyone knew coming into the season that his following was the stuff of legend. I’m not sure if any of us knew how it would translate to real dollars and cents. This ACC Tournament is giving us a live look. On the ground it’s clear that whatever team you are rooting for – everyone gets hyped to see Zion Williamson. Now we can see how his presence is effecting the ACC brand as a whole.

While it was already the most expensive conference tournament this March, the ACC basketball Tournament got another jolt of demand when Zion Williamson returned from his infamous shoe malfunction with emphatic 29-point performance against Syracuse last night.  While Zion is certainly a big draw, the 2019 tournament has a lot going for it beyond just Duke and it’s star, including three nation’s Top 10 teams– 2nd-ranked Virginia, 3rd-ranked North Carolina and 5th-ranked Duke. It’s also back in Charlotte at the Spectrum Center for the first time since 2008, when the Hornets were called the Bobcats. Not only is it the biggest draw in 2019, it’s also the most expensive ACC tournament that TicketIQ has tracked since 2011.

As the below Infographic shows, the $269 average price for the tournament makes it 17% more expensive than tickets at Barclays Center in Brooklyn last year. 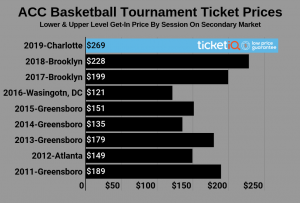 While the 2019 ACC tournament in the queen city is creating unusually-high demand, it’s getting a competition from the SEC conference tournament which is taking place in Nashville.  At an average price of $228, it’s the second-most expensive SEC basketball tournament that the company has tracked. With powerhouses like Tennessee, Kentucky as well as Auburn and Alabama, hosting the tournament in Nashville seems to be bringing out alumnae from all the schools.

As for the ACC semifinals tonight, it’s the priciest ticket for any single session across all conference tournaments this year. Zion demand has driven prices on the secondary market to an average asking price of $559, with a get-in price of $187. That’s a big jump from the early rounds where tickets were available for $5 without Zion in action. Compared to the hefty prices for the semi-finals, the finals on Saturday night are a relative bargain starting at $107, and up from under $75 at the start of the tournament. It’s a good bet that if Duke and Zion advanced, prices will rise. How much might depend on what kind of performance he puts on tonight.