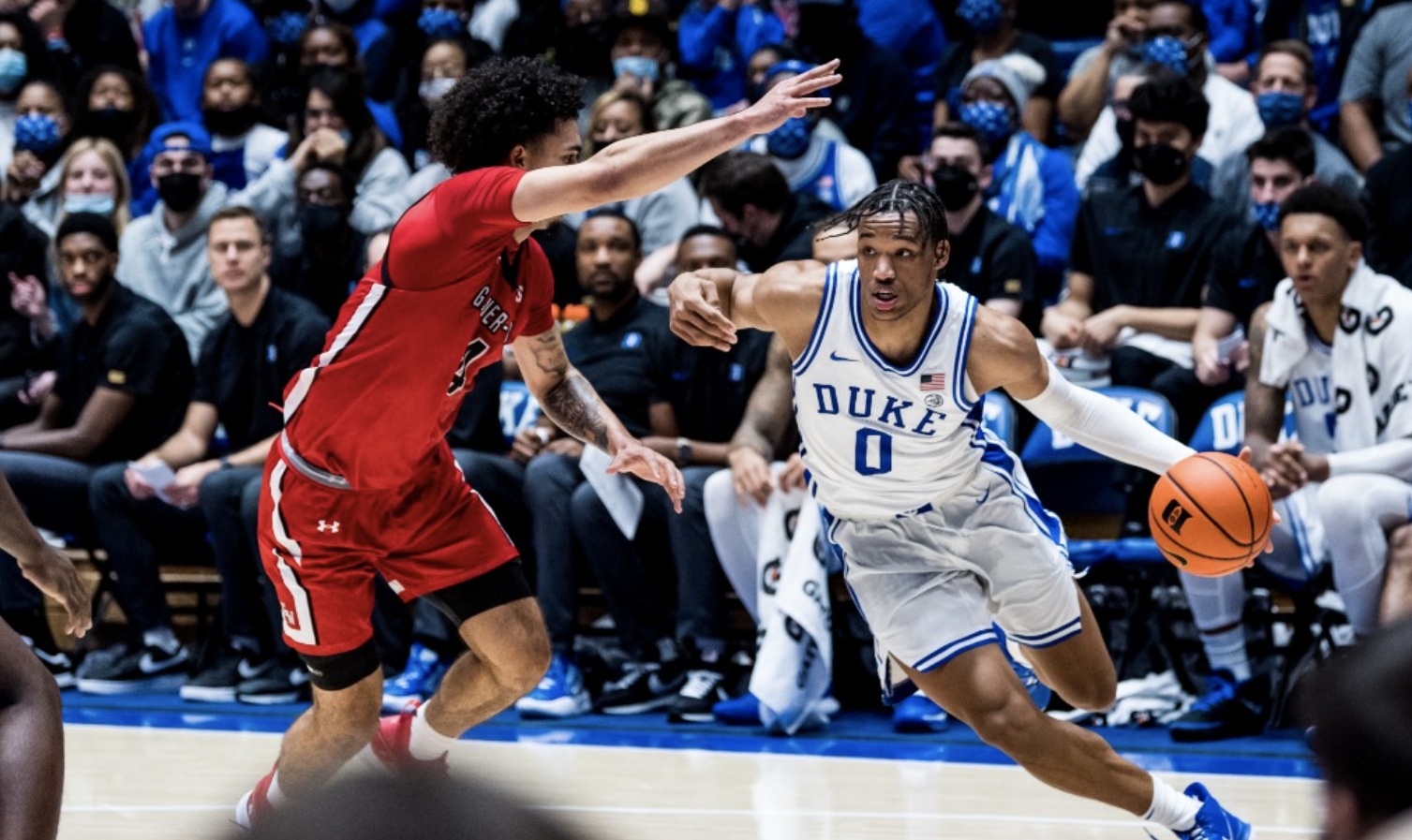 By Brian HoraceNovember 16, 2021No Comments

With the DWI arrest of Duke walk-on Michael Savarino and the controversy surrounding it, it was hard to imagine the Blue Devils not being a bit distracted. It didn’t really show on the court and it was business as usual for Duke. The Blue Devils started out of the gates slowly against Gardner-Webb hitting their first bucket at the 18:36 mark but not getting their second until the 15:27 mark of the first half. Gardner-Webb took and early lead of 13-12 before the Blue Devils off of the strength of freshmen Trevor Keels’ 16 points and 4-5 from 3 went on a 35 to 16 run to end the half. Keels would finish the game with a team high 18 points, shooting off of 4-6 shooting tom beyond the arc – Keels also added 7 rebounds and 4 assists. The Blue Devils played stifling defense on the Runnin’ Bulldogs forcing 10 first half turnovers that lead to 9 Duke points.

The second half saw the Blue Devils extend their lead with a 16-6 run to begin the second half and they never looked back. The lead allowed the Blue Devils to use more of their bench. No starter played over 28 minutes with Jeremy Roach being the team high with 28 – Roach scored 10 points and dished a game high 6 assists to only 2 turnovers. The Blue Devils got a huge game from sophomore Mark Williams who was finally able to flex his muscle after playing 2 straight opponents with guard dominated lineups. Williams Blocked 6 shots in the game and scored 13 points. The Blue Devils also got double-figure efforts from Wendell Moore Jr. who score 14, freshman Paolo Banchero who score 10 points and senior forward Joey Baker who score 12 points, added 3 steals and 2 assists.

The final tally was 92-52 as Duke turned on the gas and never let up for their mots impressive offensive output of the season and more importantly their best defensive effort only giving up 52 points.

Opening Statement: “I was really pleased with our effort tonight. We’ve been playing really good defense in the first three games but tonight we were even better. It was more of a normal routine and a little like getting ready for Kentucky because it’s a game and usually you have a little space, but instead we had those two games in a row. When we get a little preparation, it helps our squad. Our goal was to take away their three-point shooting and we did a great job of that. We shared the ball and had 24 assists. A really good effort by our guys and we move on. It’s tough to single out one guy when you play good team defense — I thought all our kids did really good jobs and we got some good double-figure minutes for guys that haven’t had minutes. Not just with our second team unit … they were able to play with guys that were on the first team. The extended minutes for AJ [Griffin] are so very important.”

On starting Paolo Banchero tonight: “It’s two entirely different situations. Headlines might make it look like it’s the same, but it’s not. The decisions we made are in conjunction with our authorities and my superiors. We’re taking action and will continue to take action.”

On Jeremy Roach’s game evolution: “I’d like to see him take his outside shot more but he’s driving so hard and he protects the ball better than some running backs. He’s really worked on his footwork so he’s really able to take some really strong steps in the lane so he’s strong when he makes contact. He’s just further removed from that ACL (injury in high school) and also, last year he would’ve been an even better athlete if it wasn’t for the lack of preparation and the consistency of what we could do for a kid during the COVID-19 season. He’s really improved athletically and strength wise.”

On AJ Griffin’s physical progression: “He hasn’t played for two years and then he was out for about two and a half weeks. He has a strong body and tonight he played strong and he can play even stronger with that body. He really worked hard tonight and we just have to keep working with him. He has a great attitude. He’s got one of the better shots and a really soft shot but he’s behind the guys who are in the starting unit. Obviously, it’s a long season and we hope he can continue to get better and he will be able to help us become a much deeper team.”

DUKE JUNIOR FORWARD WENDELL MOORE JR. “I really liked how unselfish we were. I think we had maybe 24 assists tonight, so that means we were all sharing the ball and everybody was getting a touch. And we were just making our open shots when we had them.”

On what the primary emphasis has been on offense for Duke since its last game: “Really just movement. If we get as much movement as possible, I think we’re a harder team to guard. With this offense, we just want to come down and move the ball. We don’t want to stand. We want to make a lot of passes and get the defense moving so we can open up drives. When we open up drives, we get in the lane and force the defense to collapse, and then we make open shots.”

When asked if Cameron was truly unlike all other college basketball arenas: “It’s a lot different from other places. One of the players on their team [Gardner-Webb], he asked me if it was always like this and I said that it was. I’m proud to be a part of it every night.”

DUKE FRESHMAN GUARD TREVOR KEELS “I thought we played well, especially on defense. I feel like this is a defensive team – our guards get after it and then you’ve got big Mark [Williams] in the paint at 7-1 with a 7-7 wingspan, just daring people to go into the paint so he can block it. I think he had six blocks. It was just crazy. I think it starts on defense for us.”

When asked if it was a relief to just get out on the court today: “It was a huge relief. There’s a lot of stuff going on outside that locker room, but we tried to focus on just the game. We did a good job preparing for the game, just focusing on the game, and we took care of business.”

On how Duke freshman Paulo Banchero has handled the distractions from today: “He’s a good dude. He’s always going to keep good confidence. He knew we had a game today and he didn’t let the outside noise distract him too much, but we were there to help him get through. He was good in class, he was good in pregame – he was himself. He didn’t really change at all. Coach [Mike Krzyzewski] was the same. He didn’t change at all. We just focused on this game and we got the win. We didn’t really care about the outside noise at all.”