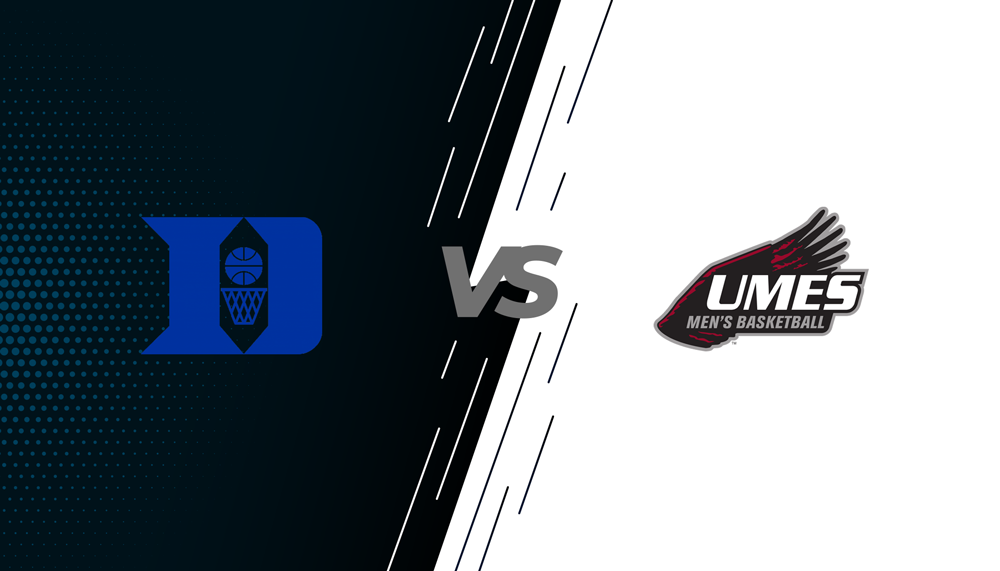 By Brian HoraceDecember 10, 2022No Comments

With the announcement coming down about 30 minutes before tip-off that Jeremy Roach would not be available for the game the question on everyones mind was who would replace him in the starting lineup. Would Duke go with Jaylen Blakes or start an all freshman lineup for the first time in program history. Jon Scheyer went with the all freshman lineup inserting Dariq Whitehead as as a starter next to Tyrese Proctor in the backcourt.

The freshman lineup looked shaky to begin the game with 3 early turnovers but Duke made up for it on the defensive end with Dereck Lively recording 3 early blocks on his way to 5 for the game. The absence of Jeremy Roach was felt on the offensive end as the Blue Devils even though they controlled the game throughout never looked steady.

Freshman Dereck Lively began the scoring for the Blue Devils with two early baskets, including his 17th dunk of the season. A three-pointer by Jaylen Blakes gave Duke an 11-2 advantage early. A step-back three-pointer by Jaden Schutt at the 7:48 mark gave the Blue Devils their largest lead of the game so far, 23-9. Kyle Filipowski scored 12 of Duke’s final 14 points of the first half over the final 5:28 and a breakaway dunk from Filipowski gave the Blue Devils a 39-21 lead at the half despite Duke’s 9 first half giveaways.

The first six baskets of the second half were scored by six different Blue Devils, as Duke took a 54-34 lead into the under-12 media timeout. Duke’s defense held Maryland Eastern Shore without a field goal over four minutes and went on an 10-0 run to establish a 66-36 lead. Despite the lead for the Blue Devils the sloppiness offensively plagued them throughout the second half as well with 10 more turnovers. In all the Blue Devils turned the ball over 19 times in the game that accounted for 14 Hawks points. The Blue Devils still managed to blow out the Hawks 82-55.

With the game never being in doubt head coach Jon Scheyer was able to get some good minutes for freshman Jaden Schutt who had his best game as a Blue Devil, going 3-3 from beyond the arc for 9 points. Dariq Whitehead and Tyrese Proctor led the Blue Devils ion scoring with 15 each for the freshman backcourt. Kyle Filipowski added 14 points and 7 rebounds. Dereck Lively added 8 points and 9 rebounds in the win.

The Blue Devils, despite the turnovers, shot 8 of 20 from beyond the arc for 40%, they shot 52% overall from the floor. The out-rebounded the Hawks 42-20 and got 12 second chance points off of 14 offensive rebounds.

“Good win for us, credit to Coach Craft [Maryland Eastern Shore Head Coach Jason Crafton] and their team and how hard they play. For us it’s 18 assists, 19 turnovers, it wasn’t the prettiest. But overall, our effort was good, different guys really stepped up. Proud of Jaden Schutt, he’s worked, you guys haven’t been able to see it, but he’s worked before practice, after practice, he’s been the best player on every team on any team we scout that we play against, and that’s a role that a lot of big-time players have had here. I was in that role. I’m not suggesting I’m a big-time player by saying that, I understand being in the role. Just proud of him, and credit to him. The first play he made was an offensive rebound; it wasn’t a shot, it wasn’t a three, it was an offensive rebound and that got us going. But a good collective effort, it’s been a heck of a stretch for us, 12 games in 34 days. We have finals now, and we need to figure out how to get better from here.”

“Tyrese [Proctor] did a really good job, and that’s his first time being in that role. The thing with him is that he’s really smart, he’s really unselfish, and the next step is just taking what he knows and talking more. I want him to talk more and to use his voice, because he sees things that others don’t or can’t and he really carried the load for us with ball handling responsibilities. Jaylen [Blakes] came in and did a nice job as well. When Jeremy [Roach] comes back we feel like the two of those guys can play off one another very well.”

On where he’s seen the most growth from the team over the recent stretch:

“For me, I’m proud we’re learning what it takes to win. The talent has been there, the unselfishness has been there. Now it’s the plays, the loose balls, the talking on defense, how to work to get open. All the little details; they’re embracing what they’re seeing and I think their confidence is improving, and our confidence is growing. We have a long way to go and a lot to work on, but I do feel we’re night and day already from who we were to start the year until right now.”

On Dariq Whitehead’s performance and his overall progress:

“Dariq did a good job. For him, he can have some big scoring games, and he can also really impact the game with his versatility. That’s one of the things, watching him in high school. I watched him a lot, whether it be at Montverde or the EYBL circuit and he’s a complete player. Defender, can really pass. I actually thought he could’ve had a couple more assists today, but we didn’t convert those with him. I want him to get out in transition more, attack the basket and I don’t think he’s shown yet, I think you’ll see soon, just what a defender he can be too. With his size and athleticism he can guard multiple positions. I’ve said it’s been a tough stretch for our team, it’s been a tough stretch for him. He came back at the hardest segment of our season, hasn’t been much practice team. I think for our team these two 10-day breaks between when we play on the 20th and 31st will be important for our team, but it’ll be really important for him. It’ll be his first chance to be healthy, to practice every day, and get a chance to be himself.”

On if it felt unusual starting five freshman:

“Yes, it does. I don’t think it’s ever happened before, if I’m not mistaken. It’s not something we were trying to do for that reason, it just organically ended up that way. Each of those five guys, they’re talented, they’re bought into the team, and they’re trying to figure it all out. Thought they did a good job out there, we were a little quiet, which is what it’s going to be when you have five freshmen. Proud of their effort and proud of what we did overall.”

On the depth of the team and the performance of the bench:

“I’m not surprised. Jaylen [Blakes] and Jake [Jacob Grandison], every game they bring energy. When they go in the game, they may not make every right play, but who does? Jake, you can tell with him, he’s a really calming influence. He’s a great passer, I’ve got to get him where he’s shooting more open shots. He’s really unselfish, and he just plays hard all the time. Jaylen plays hard all the time and it’s infectious. I think that’s a contagious trait, when you have a couple of guys who give it everything they have. It translates to the rest of the group, and it was needed today, I’ll tell you that much.”

On being part of an all-freshmen starting five for Duke tonight:

“It felt great. Coming into the game, Coach [Jon Scheyer] told me this was going to be the first time in history that Duke ever had five freshmen starting, and just to know that we came out here and got a W is something that will go down in history. I think [Coach Scheyer telling the team] was more so a motivation thing. I don’t feel like it was to put more pressure on us. I feel like it was more so to motivate us to go out there and do something that’s never been done before. That was the mindset we had coming in – five freshmen, let’s make sure we get the job done.”

On Tyrese Proctor getting the start at point guard tonight and how he handled it:

On his role evolving:

“[People] are starting to see a lot more of me just getting more comfortable and settling in. I feel like this was a game where things started to get going again. I’m getting my legs back, body getting back in shape, losing weight. The last thing really is now just the mental part. When I get past that, everything will be 100 percent.”

“Jeremy’s a big key for us. Obviously, him being out, it sucks for us, but we just wanted to fight for our brother. I thought the main thing for our starting group tonight was just being vocal, everyone being on the same page, getting stops, and just pushing our offense from our defense.”

On being part of an all-freshmen starting five for Duke tonight:

“We just wanted to prove a point. We played as hard as we could. All the five freshmen [starting] stuff, we just really wanted to get stops. That’s what we talked about early on, and our offense is going to come. The coaches said that, and we all believe in that. Just being on the same page was one thing that we all spoke about early before the game, everyone being locked in.”

“[Maryland Eastern Shore is] a great team. We knew that they were a great team coming into this, obviously watching a lot of film on them. I think a lot of people underestimate them. They’re shorter but they play their butts off. They’re really good on-ball defenders. They got a couple of early tips and then breakaway dunks, but we just tried to minimize that as much as we could, and I think we did that at the back end of the game.”

“You know, Duke is very good. They’re big. I thought that they overwhelmed us with their size, especially in the beginning of the game and throughout the first half and made it extremely hard for us to execute offensively. We knew rebounding was gonna be a big thing for us to have any chance to be able to be in this basketball game. You see we got beat on the boards pretty bad there; looks like an almost minus 20, minus 22 on the glass and so we’re disappointed in our effort on the glass. I thought we did scrap. The second half looked a little bit more similar to how we play. We got a little loose. This place does that to you in terms of just the awe factor a little bit and once you kind of get past that and you start playing basketball, you’re already down 20. But I felt like our guys scrapped in the second half and gave everybody a chance to see what we could potentially be within our conference.”