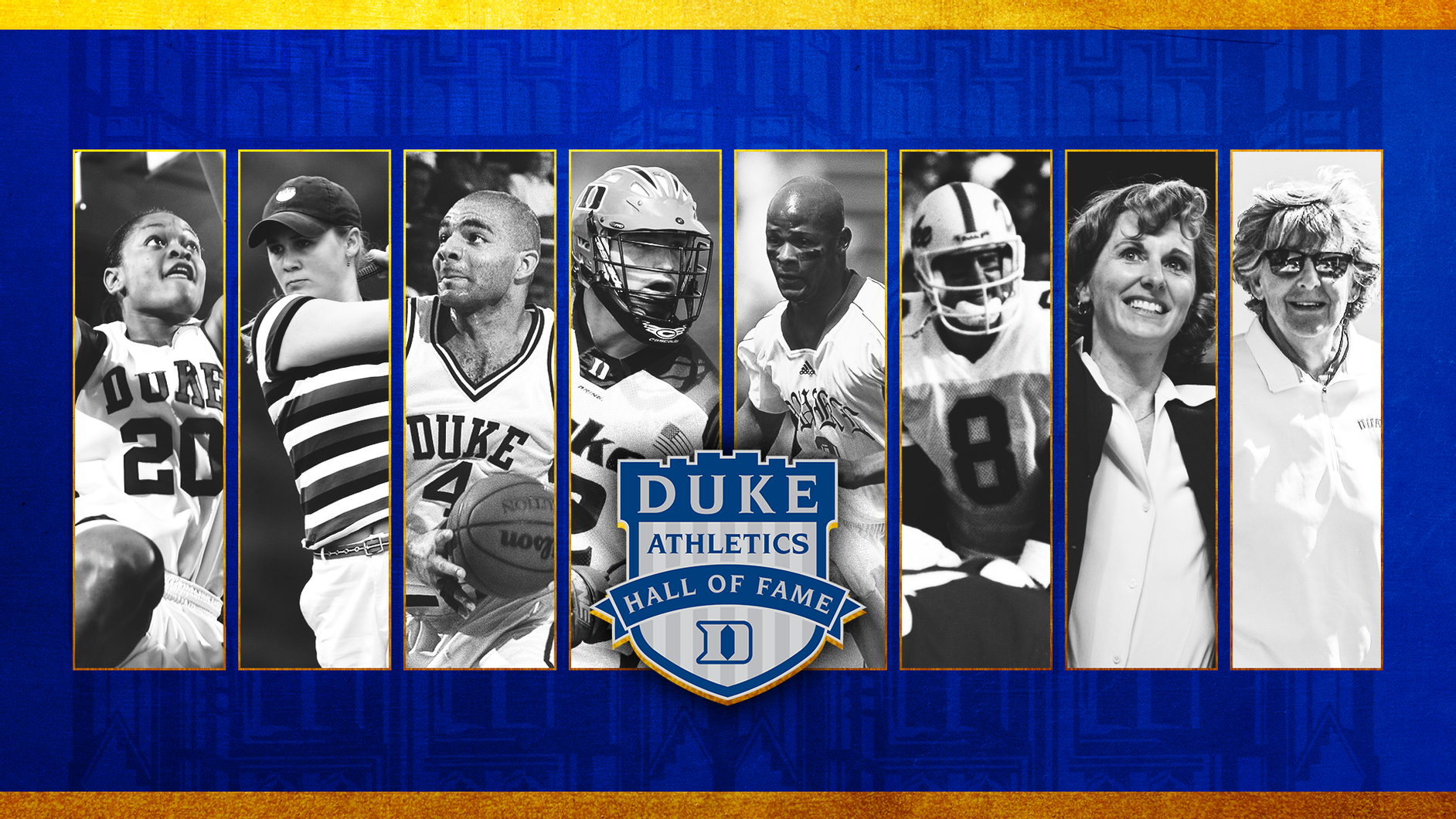 By Brian HoraceDecember 9, 2022No Comments

Beard, the program’s all-time leading scorer with 2,687 points, was the first Duke women’s basketball player to have her No. 20 jersey retired. The 2001 National Freshman of the Year and two-time National Player of the Year (2003, 2004), Beard led the Blue Devils to four straight ACC titles and four consecutive NCAA Tournament appearances, including back-to-back trips to the NCAA Final Four (2002, 2003). The Frierson, La., native was a three-time ACC Player of the Year, three-time Kodak All-American and four-time Associated Press All-American. Following her time at Duke, Beard was the No. 2 pick in the 2004 WNBA Draft and enjoyed a 15-year playing career with the Washington Mystics and Los Angeles Sparks – highlighted by winning the 2016 WNBA Championship and back-to-back Defensive Player of the Year awards (2017, 2018). Beard, who retired from professional basketball in 2020 to enter the private sector, was a nine-time WNBA All-Defensive Team selection, four-time All-Star and a 2006 All-WNBA Second Team honoree. She has also spent time over the last two years as an analyst on ACC Network.

One of the top collegiate golfers in NCAA history, Blumenherst rewrote the Duke record book over her four-year career.  A three-time National Player of the Year and four-time All-American, Blumenherst collected school records for victories (12), top-five finishes (31) and top-10 finishes (37) among others.  Blumenherst became the first NCAA women’s golfer to win three National Player of the Year and GolfStat Awards.  She helped lead Duke to three ACC Championships, two NCAA titles and 19 team victories over her career. The Scottsdale, Ariz., product won the ACC Individual title three times and placed in the top 10 at the NCAA Championship in each of her four seasons with the Blue Devils.  Internationally, she represented the United States in the 2006 and 2008 Curtis Cup competitions, while also winning the 2008 U.S. Women’s Amateur Championship.  Following graduation, Blumenherst played professionally on the LPGA Tour from 2009-13 and currently works for the Golf Channel as a television analyst.

Boozer, who helped lead men’s basketball to the 2001 NCAA Championship, was part of 95 victories, three ACC Championships and three final AP No. 1 rankings in his three years as a Blue Devil. Duke’s all-time leader — and the ACC’s third all-time leader — in field goal percentage (.631), the Juneau, Alaska, native stands 31st in career scoring at Duke (1,506). He averaged 14.9 points and 7.9 rebounds in his career. Boozer led the ACC in field goal percentage as both a sophomore and junior, capping his junior campaign in 2002 as a first-team All-ACC selection and the ACC Tournament Most Valuable Player. Selected in the second round of the 2002 NBA Draft by the Cavaliers, Boozer enjoyed a 13-year pro career that saw him play 861 games, score 13,976 points and grab 8,192 rebounds. He was a two-time NBA All-Star and two-time Olympic medalist with Team USA – winning bronze in 2004 and gold in 2008. Boozer is currently a basketball analyst on ACC Network.

A three-time USILA All-American, including first-team recognition in 2002 and 2003, Cassese is one of the most decorated Blue Devil midfielders in program history. He was a do-it-all midfielder, playing both offense and defense, while also facing off. Cassese was instrumental in helping the Blue Devils capture consecutive ACC Championships in 2001 and 2002 and advance to the NCAA Tournament three times. The 2002 National Midfielder of the Year and 2001 ACC Player of the Year, Cassese was inducted into the National Lacrosse Hall of Fame in 2018. The native of Long Island, N.Y., finished his illustrious career with 80 goals and 38 assists and currently ranks 41st in program history with 118 points. Internationally, Cassese played at the highest level, winning a pair of gold medals with the U.S. National Team. The former Duke assistant is now the men’s lacrosse head coach at Lehigh University.

One of the all-time men’s soccer greats, Curtis is one of only two players in program history to win both the Hermann Trophy and Missouri Athletic Club Player of the Year before their merger in 2002. A two-time All-American and 1999 ACC Player of the Year, Curtis is the program’s all-time leader in goals scored (53) and ranks second at Duke and 15th in the ACC in points (134). A native of Ann Arbor, Mich., Curtis helped lead Duke to three NCAA Tournament appearances and the first ACC Tournament Championship in program history in 1999. A four-time All-ACC selection, Curtis’ 17 goals in 1999 still ranks tied for the most in a single season in Blue Devil history.  He helped lead Duke to 64 wins over a four-year stretch. Curtis was the second overall pick in the 2001 Major League Soccer SuperDraft and later became the first Black general manager in MLS history with the New York Red Bulls in 2014. Curtis is now Senior Vice President of Competition and Operations of MLS Next Pro.

Dilweg, a native of Bethesda, Md., etched his name into the Duke football records book during his time in Durham. The 1988 ACC Player of the Year and First Team All-ACC selection holds Duke’s career record for pass efficiency rating (128.94) and single-season records from 1988 for most passing yards (3,824), total offensive yards (3,713), pass attempts (484), touchdown passes (24) and 300-yard passing games (9). He finished his senior campaign, leading the ACC in both pass efficiency (134.6) and total offense (337.5 ypg), while ranking second nationally in both passing yards and total offense and fourth in touchdown passes. The Davey O’Brien Award finalist was also more than a quarterback, serving as the team’s starting punter for four seasons. In 199 career punts, he accumulated 7,889 punting yards (39.64). At the conclusion of his Blue Devil career, Dilweg played in the Japan Bowl in Tokyo, Japan, and the Hula Bowl in Honolulu, Hawaii, where he was named the offensive MVP after completing 12-of-17 (.706) passes for 145 yards with three touchdowns. He was selected in the third round of the 1989 NFL Draft as the 74th overall pick by the Green Bay Packers, where he played with the organization for two seasons (1989-90). He is the CEO of Dilweg, a real estate investment firm he founded in 1999 that is headquartered in Durham.

Goestenkors served as the head coach of the women’s basketball program from 1992-2007 and registered one of the most successful women’s basketball coaching tenures in NCAA history with a 396-99 (.800) overall record and 179-55 (.765) mark in league play during her time in Durham. Under her direction, the Blue Devils advanced to four Final Fours including two national championship games and registered an ACC record 51-game winning streak against conference opponents – a mark that stands today. A four-time National and six-time ACC Coach of the Year, Goestenkors led Duke to 13 total ACC Championships, seven consecutive 30-win seasons, seven straight top-five recruiting classes and 13 20-plus win seasons. She was inducted into the Women’s Basketball Hall of Fame in 2015. Goestenkors now serves as an independent coaching consultant.

Silar spent four decades at Duke as both a coach and administrator from 1979-2020, before retiring from her Senior Associate Director of Athletics position on June 30, 2020. Silar was the first Senior Woman Administrator in Duke Athletics history, holding the post since its inception in 1995. She served as an assistant women’s basketball coach for 14 seasons with head coach Debbie Leonard (1980-92). Duke’s first full-time assistant coach for women’s basketball, Silar and Leonard teamed together to produce four nationally-ranked teams, including a No. 7 ranking in 1992, and the program’s first NCAA Tournament bid in 1992. She spent 15 seasons as Duke’s head field hockey coach (1981-95), where she was tabbed ACC Coach of the Year twice (1990, 1992). Silar remains Duke’s all-time wins leader with 162 victories. She transitioned into athletics administration where she served Duke, the ACC and NCAA in a variety of capacities. Notably, she was a member of the NCAA Field Hockey committee and NCAA Women’s Basketball committee, including the chair in 2008-09.