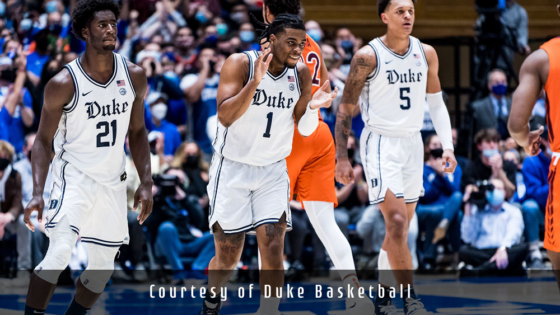 By all measures of metrics the Virginia Tech Hokies would be the toughest out for the Blue Devils in the ACC this year but even with that the Blue Devils were expected to win handily. If you watched the first half you saw that Virgina Tech was not aware or just didn’t care about those metrics. After the Blue Devils jumped out to a 9 point lead it looked like this might be one of those games that ends quickly in Cameron.
But instead of a blow out, Duke was in for a dogfight. Duke went cold and Tech went off. Virginia Tech was not rattled and methodically worked both the angles and their leading scored Keve Aluma to the tune of a 32-21 run to give them a 4 point halftime lead.

Aluma torched the Devils in the paint to the tune of 17 first half points on 7-12 shooting and 6 rebounds. Duke struggled at times against the stout Hokie defense down the stretch in the first half but still managed to get 12 points from junior guard/forward hybrid Wendell Moore Jr. who paced the Devils in the period. Freshman Paolo Banchero struggled in the half shooting only 3-9, scoring 6 points with 3 turnovers.

One of the points of emphasis for this Duke team was to be stronger on the boards but once again Duke allowed a smaller team to out hustle and outbound them in the first half. Virginia Tech had a 4 rebound advantage over Duke at the break, 7 of which were offensive.

It seemed obvious the message at the half would be Duke’s lack of energy, verve and hustle. Coach K instead remarked, “This was a game where I never yelled at my team. That’s uncommon. At every timeout I was telling them they were playing well and to keep it up. Hang in there, this is what this is about.”

The second half wouldn’t begin in Dukes favor with a couple of defensive breakdowns by Duke and some precision passing by the Hokies. Hunter Cattoor beat Wendell Moore Jr. on a backdoor cut on their first possession to push the lead to 6 points. Then off of a Banchero turnover he was beaten on the next defensive series off another cut to the basket by Justin Mutts, delivered by Storm Murphy. Just like that lead was 8. The halftime messaging seemed to kick into gear after that mini-run by the Virginia Tech and Duke put on a run of their own. Fueled by a trio of Blue Devils, Duke went on a 31-9 run at the 11:19 mark of the first half. Banchero scored 11, freshman AJ Griffin scored 7 and Wendell Moore Jr 6 during the run that saw the Blue Devils go 13-18, with 5 steals.

Duke would push the lead to 14 points, but a Virgina Tech run late would get the lead down to 5. The Blue Devils stayed aggressive and wore out the Hokies in the end to a 76-65 victory.

The Blue Devils were paced by freshman Paolo Banchero who despite having a frustrating first half came alive in the second half, scoring 17 points on 6-11 shooting in the second on his way to 23 for the game. Wendell Moore Jr. scored 18 points on 6 of 9 shooting and 2-2 from 3. Moore added 4 rebounds and 4 assists.

The move of the game was a coaching one. Coach K elected to go “small” inserting AJ Griffin at the 4 and Paolo Banchero the 5. The move worked brilliantly and Griffin flourished scoring 13 points on 5-7 shooting and pulling down 4 rebounds. Griffin showed off an array of moves, and added another ball-handler on the floor. The other big move was the Blue Devils played more physically, rebounding the basketball much better.