By Randy DunsonMarch 27, 2015No Comments 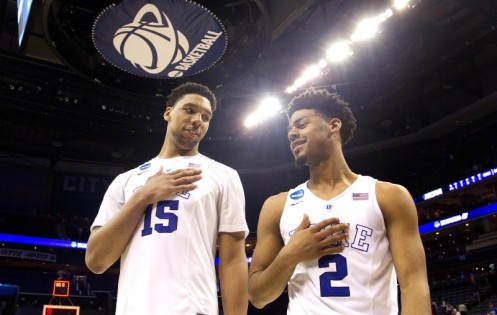 KANSAS CITY, Mo. – Duke freshman Jahlil Okafor and senior Quinn Cook each added to their respective list of awards Friday when the duo was named to the National Association of Basketball Coaches (NABC) All-District 2 Team. Those individuals selected to all-district teams are voted on by member coaches of the NABC.

Okafor is just the second freshman in Duke history to score over 600 points during his rookie season, averaging 18.1 points per game. Okafor’s 18.1 ppg. average ranks second in the conference, while his field goal percentage (.677) leads the ACC and ranks second in the nation. Okafor has posted 11 double-doubles, the most by an ACC freshman this season, while he is also on pace to become just the 13th freshman in conference history to lead his team in both points and rebounds.

Cook, an All-ACC Second Team honoree and USBWA All-District III Team member, became just the seventh player in Duke history to record 1,000 career points and 500 career assists. Cook has also proven to be a prolific passer over his four years at Duke, owning the best assist-to-turnover ratio, 2.51:1, in Duke history. In addition to his passing ability, Cook has also demonstrated an efficiency from beyond the arc, ranking third in the conference in three-point percentage (.407), and leading the ACC in three point field goals made per game (2.86). Cook has connected on at least one three pointer in 45 straight games, a Duke record.