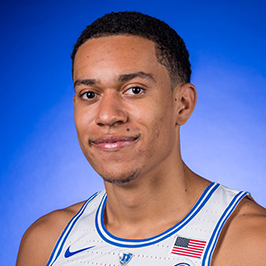 By Brian HoraceNovember 7, 2019No Comments

Robinson, a graduate student at Duke University, is in his fifth year on the Duke men’s basketball team. He will join sophomore captain Tre Jones and senior captains Jack White and Javin DeLaurier on the Blue Devils’ newly-created Leadership Council.

“I’m thrilled to add Justin as one of our team captains,” said Krzyzewski. “He is our most experienced player, a natural leader and a fifth-year student-athlete that graduated from Duke and is now pursuing his master’s degree. He is without a doubt the most respected guy in our locker room and will add another valued voice on our Leadership Council.”

Robinson is a native of San Antonio, Texas, holds a bachelor’s degree in psychology and is pursuing his master’s degree in management students in Duke’s Fuqua School of Business.