Duke Gets Much Needed Win 75-68 against Georgia Tech

By Brian HoraceJanuary 27, 2021No Comments

It was never about X’sand O’s for a Duke team desperately in need of a win – it was about toughness and fighting through adversity. Duke couldn’t afford another slow start against a Georgia Tech team who came within a possession of beating ACC leader Virginia. The Blue Devils did not disappoint – The Blue Devils held the lead for 07:51 in the first half and ended the half on a 12-3 run to lead the Yellow Jackets by 8 at the half.

The Blue Devils were paced by 19 points from freshman DJ Steward, who scored a team high 19 points on 5-12 shooting and 3-6 from the 3-point line. Jalen Johnson, after a tough game against Louisville recovered to score 18 points on 7-11 shooting. Matthew Hurt after a slow first half scored 17 points and added 8 rebounds. 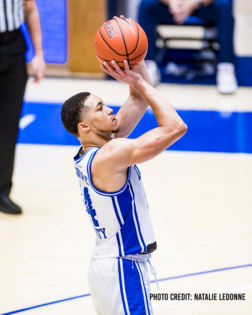 Senior point guard Jordan Goldwire may not have started this game but he was the key for the Blue Devils. Goldwire’s leadership on both ends of the court was a huge part of the victory for Duke – his 7 assists and 11 points were a much needed boost for a team that seemed to struggle mightily offensively. Goldwire’s defense on Jose Alvarado in the waning moments of the second half including a steal helped secure the win for a team that was in dire need. Freshman Mark Williams who subbed in for 12 minutes, providing Duke 6 rebounds and 6 points.

It’s hard to say if this is a turning point for the Blue Devils but a win is a win and this team looked much better on both ends of the floor. Duke still needs to cut down on the unforced errors as they still turned the ball over 14 times. Some positive notes for the Blue Devils – they out rebounded Georgia Tech 43 to 28. Duke also addressed the free throw deficit they’d been in by shooting 18-22 while only allowing 4-5 for Georgia Tech – a huge point of emphasis. 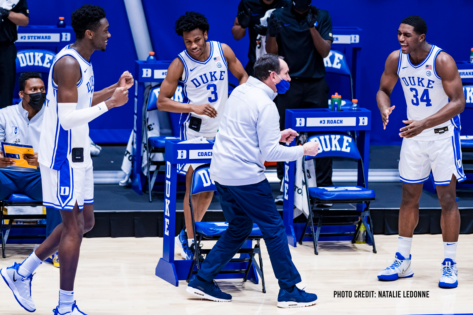 Opening Statement: “We beat a really good team tonight. I’m proud of my guys. They played a tough game tonight. I thought the leadership that [Jordan] Goldwire and [Wendell] Moore Jr., brought … it was the first time we’ve had that level of leadership. Jordan did a great job in the game. Mark Williams has not practiced that well this week until the last couple of days. Nate James has done a great job and he’s put in extra work. He gave us a big boost. Going forward, maybe we’re building a team here. The last couple of days we’ve been stressing not to put your hands on people and foul. We didn’t put them on the foul line. Our defense was good. They [Georgia Tech] are a tough team to defend. [Jose] Alvarado is as good of a guard at a high level. Down the stretch, we made big buckets. Matt Hurt was strong … Jalen [Johnson] and we rebounded the ball really well. Big win for us. They had two threes that bounced up 20 feet in the air and came back down and went in. [Bubba] Parham threw it in at the end of the shot clock to make it 60-59. They took the lead by one and based on losing three in a row, a team can start thinking negative and our guys didn’t. I’m proud of our players.”

On the emotion at the end of the game:

“This is from August 1st. This has been a long journey and every team goes through it differently. We have not had a positive [COVID-19] case yet … knock on wood, but we’ve had interruptions. It’s long for anybody but for a young group, it’s really long. Losing three games, the last one being a very winnable game for us, it can go the other way really easily. We’ve had two good days of practice and a great meeting last night before they had a snack and went to bed. They responded. I’m just so happy for them. I’m as happy as I was disappointed for them on Saturday.”

On the lessons learned tonight:

“It goes to leadership. Goldwire and Wendell did a good job of settling us down. You expend so much energy trying to stop them and you can let up a little and not be poised. I thought we had good poise at the end. Not that we were rattled or anything at Louisville, but we worked better as a unit tonight. Again, it’s a young team. Hopefully we can continue to do that.”

On Jalen Johnson continuing to grow:

“He not only didn’t play but he didn’t practice for over a month. So, for him to be advancing like he is is really encouraging. And to learn about the physicality of the game and to play through contact. He made those two plays in the last few minutes through contact and he made one of them after letting Alvarado take the ball from him. That’s a big sign. You can get down about that and not be strong in the next play, but he was. Having Mark [Williams] sub … hopefully that’s something we can build on there, too.”

On reflecting on the relationship with Kobe Bryant:

“You’ve probably seen a lot today on Instagram, Twitter, sports sites … there are so many tributes. It’s amazing how many people he touched in such a deep way. Remember, this generation of players, too. He and now LeBron [James] … he was the [Michael] Jordan for these young guys … a lot of my guys were wearing Kobe’s shoes and shirts today. He was idolized. For me to have an opportunity to coach him three times, we had a good relationship because of the Olympics. And so did my wife, Mickie. And so did our kids and their kids because of Beijing. My grandchildren and his girls … I can remember in one of the eating rooms where my two granddaughters were, Kobe came up and kissed them on the hand and called them each a princess. He had that way … you start crying really when you think about it. What a tragedy. It’s hard to believe it’s been one year. What a loss. I reflected quite a bit on him today.”

On how it feels to end Duke’s recent three-game losing streak: “It feels great, obviously. It’s not something that happens a lot here at Duke, but we play in a tough league. We lost three tough games and we’ve just got to get back on the horse. This win for us was huge, but we’re not satisfied – we’ve got to come back Saturday [versus Clemson] ready to play.”

On the play of Duke freshman forward Jalen Johnson late in the game tonight: “Jalen’s a great player. He just took the reads and made smart plays. When he’s attacking the rim like that, it’s really good for us. Obviously, when he’s doing that, it’s big for us and we appreciate it.”

On Duke’s increased opportunities from the free throw line tonight: “We went back and looked at film and against Louisville, we were kind of dribbling out on the perimeter a little more. I think guys were trying to get deeper into the lane more tonight. I think we were just more aggressive today, trying to get into the paint.”

On Duke’s apparent focus on getting the ball into the post more on offense: “You just take what the defense is giving you. We knew that they were going to come out in a zone and have small guys at the bottom. It was just attacking the game plan. Whatever the defense gives us, we just try to exploit it.”

When asked to describe he’s seen in this Duke team over the course of the season: “We’ve had a lot of tough games, a lot of games that we could’ve won that came down to the wire. For us to come out and beat a very good Georgia Tech team, an older team, just shows that we’re trying to keep improving every day. We’re just trying to take what the coaches are saying and try to put it into the game. It’s one win. Obviously, we like to get back into the win column. There’s a lot more games to go. We’ve just got to keep trying to get better and keep learning from our mistakes.”

When asked how he feels about his recent role as the sixth man: “Whatever Coach [Mike Krzyzewski] asks me to do, I’m going to do it. I’ve been here for four years. If Coach thinks that’s best for me, then he thinks it’s best so I’m just going to come out [and] play. I know my team still relies on me. I know I’m still one of the leaders on the team. So I’ve just got to come out, play, give my team energy, tell them what to do. I’m cool with whatever.”

When asked if Duke approached this game with a greater sense of urgency: “I’d say it was just the same thing as we say every game – just play hard and play together, and I think we really did that tonight from the get-go. I think we jumped out first and that’s what helped us maintain a solid lead throughout the game.”

On how it feels to get this win tonight: “It’s good. We all wanted this win. We needed this win. It’s a big confidence booster. But we’ve just got to get prepared for Saturday [versus Clemson] and kind of put this one behind us. Enjoy it, but we’ve got to start preparing for Saturday.”

When asked what was key for Duke in overcoming the Georgia Tech runs in the second half and holding on for the win: “Just executing and getting stops. Basketball is a game of runs, so we weren’t going to let them keep going on those runs. We decided to match that energy and continue to bring our own energy and eventually take that.”

When asked how it felt to take such a leading role in Duke’s success late in the game: “I wouldn’t say it was just me. It was the leadership of Jordan [Goldwire], Matt [Hurt], Wendell [Moore]. We all just played together. I wouldn’t say I really took over. My teammates trusted me and I trusted them. That was the main thing.”