By Brian HoraceFebruary 26, 2014No Comments

I didn’t watch this game live, but rather followed social media from a school function and I think perhaps we as fans get on this team a little more than they deserve. Yes, there was good and there was bad but mostly good. Yes there were defensive lapses, yes there was questionable shot selection at times but there isn’t a team in the nation that doesn’t have these issues. What Duke fans can look to as a huge step forward is that the team came out engaged. Apparently the team received some strong words pre-game after an uninspired shoot-around. That is the granular level of coaching. They monitor the shoot-around…I’ve never heard of such but it worked out well for Duke because they came out strong, very strong.

Duke would begin the game on a run, a 24-4 run to be exact. Even though Duke did not shoot proficiently they did take advantage of 9 first half Virgina Tech turnovers and scored 11 points off of them. They duplicated that number in the second half (Duke) scoring 22 pouts off of turnovers for the game. Dukes pressure defense, especially on the perimeter was on point in this game and kept the guards for Virginia Tech off-balance and caused them to throw passes that were easily picked off for easy transition buckets.

Virginia Tech would get back into this game with a run that lasted from the waning minutes of the first half and on into the second, shrinking the Duke led to 7 at one point in the second half. Duke, as well as they pressured the perimeter still allowed Virginia Tech to get points in the paint, Duke took an 18 to 10 lead in that department into halftime and by games end it was even at 26. Virginia Tech was led by forward Trevor Thompson who had 15 points on 6 of 9 shooting. Thompson was the only double-digit scorer for the Hokies in the game.

Duke came out sluggish in the second half and Virginia Tech would make them pay. They began aggressively and chipped away at the 12 point halftime margin as they had the 20 point margin in the first half. For the most part the starters for Duke did a great job, one Coach K began to mix and match lineups there seemed to be a higher rate of defensive breakdowns and lapses in turn the lead would grown and shrink pretty rapidly depending on who was in the game. Not quite what the coaches are wanting to see at this stage of the year.

Duke attacked the Virginia Tech zone pretty well with a mix of outside shooting and high post, mid-range jump-shots, and despite a 4 minute drought in scoring Duke pretty much had its way on offense in this game. Rodney Hood had a tremendous offensive effort for Duke. Hood would score 21 points on 9 of 17 shooting and also dish 4 assists – a solid effort from the redshirt sophomore. Just like the Syracuse game, placing Rodney Hood in the middle of the zone opened things up for Duke and gave him easy shots with very little resistance,and when the Hokies would key on Hood he was able to find his shooters out behind the 3 point line. While Duke did not really shoot particularly well in the game (38.7%) it was enough, along with the other advantages Duke earned from rebounding (36-30) and turnovers (9-15), for Duke to win handily. 66-48

Jabari Parker was not particularly effective on offense in this game but defensively he is slowly improving, the freshman plays the passing lanes well but still isn’t showing hard when he hedges off of screens. It’s one of those things that comes with time and repetition. Parker gave up a couple of open looks because of not showing hard but luckily for Duke Virginia Tech did not knock them down efficiently. Parker would score 11 points but only shot 3 for 11. Parker also pulled down 1 boards for duke and had 3 assists and 3 blocks, Jabari also had 3 turnovers and wasn’t particularly strong with the ball. 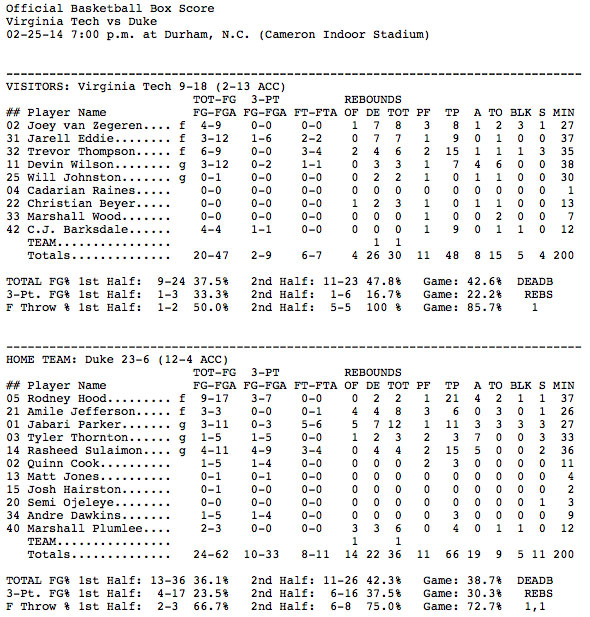 Some Good…and Some Bad for Duke, and what I noticed:

The good is pretty simple, Duke didn’t shoot well and still won the game. They played well against the zone and it really didn’t take Duke out of what it needed to do to win. Also good for Duke the assist numbers. Duke had 19 assists in the game. Tyler Thornton had 7 of them, Rasheed Sulaimon had 5 and Rodney Hood 4. Those are incredible numbers and showed a complete willingness to share the ball. That is going to be what gets Duke the best looks possible going forward. Duke won the rebounding battle by 6, it’s not a huge number nor is Virginia Tech a huge team but we’ll take it. Marshall Plumlee. The kid brother of Mason and Miles just keeps getting better and keeps earning minutes. With 2 put back dunks for the Devil, Marshall may be the most improved over the last month for Duke. He is high energy and never takes a play off and coaches just love that. He is not a superb defender but he is a disruptor and moves his feet well. Marshall pulled down 6 boards against Virginia Tech and scored 4 points.

The bad, well bench play for Duke was not very good. The defensive intensity waned when the starters left, and the scoring seemed to stagnate. The bench would go 4 of 15 from the field and pull down 6 rebounds. Only Plumlee made more than 1 shot. Duke will need much more consistency and production from it’s bench if they are to compete for an ACC or national title.