By Brian HoraceFebruary 15, 2022No Comments 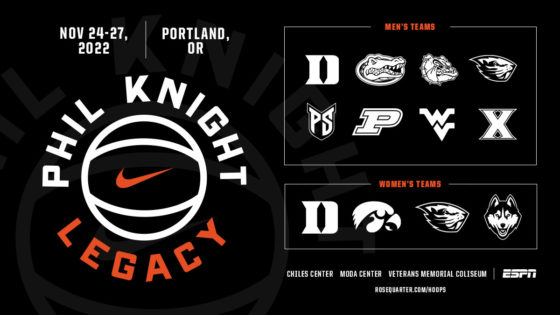 Born out of the success of the PK80 event in 2017, which the Duke men’s basketball team won in Portland, the field for the 2022 Phil Knight Legacy was announced Tuesday. The event is set for November 24-27, 2022 in Portland, Ore.

The 2022 event features eight men’s teams, while four top women’s teams – Duke, Connecticut, Iowa and Oregon State – will also compete in a four-team bracket. The venues for the 2022 event include the Moda Center – home of the NBA’s Portland Trailblazers, the Veterans Memorial Coliseum, and the University of Portland’s Chilies Center.

The final brackets and ticket information will be announced at a later date. Visit www.rosequarter.com to receive information on tickets and other important communication about the Phil Knight Legacy.