By Brian HoraceDecember 31, 2013No Comments

Duke lowers the boom on Elon 86-48 and ends the out of conference season on a strong note. Duke came out strong, determined and deliberate in their attack. Duke’s defense, which had been suspect all year, was one of the stars of this game. Duke would force the Phoenix into 12 first half turnovers on their way to forcing 22 for the game. Duke would take care of the ball exceptionally well themselves only turning the rock over 7 times for the game.

Duke would get a huge half from senior Andre Dawkins who would go 4 out of 6 from beyond the arc in the first half, and end the game with 15 points on 5 for 7 shooting. Duke’s Jabari Parker would keep his double-digit scoring streak alive with 12 points  in 23 minutes of play and also recorded a double-double by grabbing 10 rebounds.

The encouraging signs for Duke heading into ACC play would have to be the production and minutes from the bench. 45 of Dukes 86 points game from the bench, including 11 from Rasheed Sulaimon (who also had 2 assists and 4 rebounds) and 9 from Amile Jefferson (who added 6 boards). The number that Duke fans have to love is 4 points and 4 boards from Marshall Plumlee and also the fact that Plumlee played 17 minutes in the game. Plumlee looked the most comfortable out on the floor as he has all season and even recorded a block, an assist and a steal in arguably his best game so far.

Duke’s defense stepped up big against an Elon team that has played a very tough non-conference schedule. Duke would not only win the turnover battle but would hold Elon to 18 first half points and only allow them to shoot 35.2% for the game while Duke would shoot 48.5% from the floor but most impressively 52.6% from three-point range. 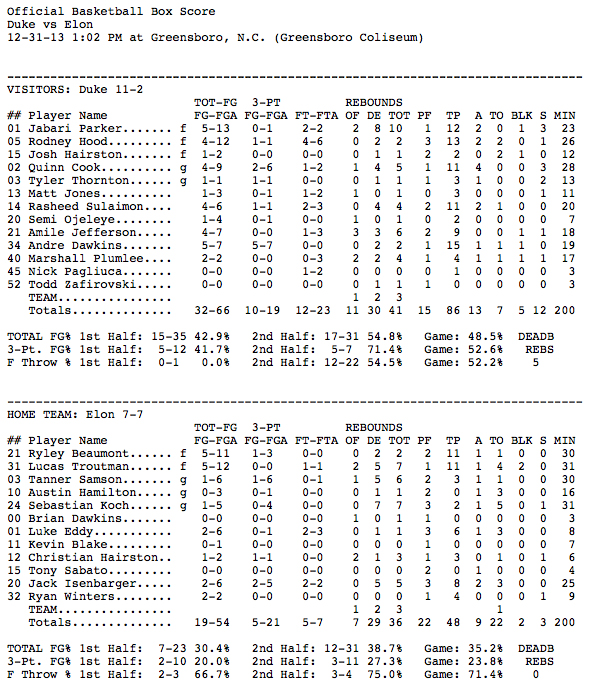