By Brian HoraceJanuary 3, 2015No Comments

In their first ACC contest of the year Duke overwhelms the Boston College Eagles 85-62. BC  came in with a gameplay to stop Jahlil Okafor by throwing multiple bigs at the freshman beginning with their often injured center Dennis Clifford. The strategy seemed to work as Okafor was routinely pushed further and further away from the basket, but still the big man was able to pass effectively out of trouble and eventually he would put the BC bigs in foul trouble. Luckily for Duke the 3 point shot was clicked to the tune of 43% (9 of 21). Duke being effective from beyond the arc would create more space for the big man to operate on the inside and Jahlil would make them pay with a career high 28 points on 7 of 11 shooting and a surprising 14 of 17 from the foul line.

Quinn Cook an Rasheed Sulaimon had upperclassmen type efforts in this game. Cook scored 15 in the game hitting 3 of 9 from beyond the arc. Sulaimon, off the bench, scored 11 for Duke on 4-7 shooting an 3 for 3 from 3 point range. Matt Jones also provided a spark of 8 points off the bench hitting 2 of 4 from 3 point range and adding a steal and an assist.

Justise Winslow did not lead Duke in scoring but did lead Duke in highlight reel dunks. Winslow scored 13 points and also added 4 assists and 2 blocked shots. Defensively Duke did have issues staying in front of Olivier Hanlan who may be the best scoring guard in the ACC, Hanlan finished with 22 points on 8 of 16 shooting. On the plus side for Duke despite a height disadvantage Duke ended the game with 10 blocked shots.

Tyus Jones did not have his best game against the Boston College Eagles, the freshmen was 0 for 5 from the floor but did have 3 assists and pulled down 4 rebounds. It was not a surprise that Jones struggled a bit as BC boasts one of the oldest back-courts in the ACC with 2 seniors and a junior.

Coach K would run the gamut of emotions in this game. His ire was clearly visible at every turnover as Duke would once again have double-digit turnovers (11). On one series in the second half Rasheed Sulaimon and Quinn Cook traded assists for 3’s which got Coach K up and in their chests (in a good way). The importance of the series was that it occurred with the freshman trio on the bench. If Duke can get production from its secondary lineup with Cook and Sulaimon the main options, Duke becomes that much more dangerous going forward. 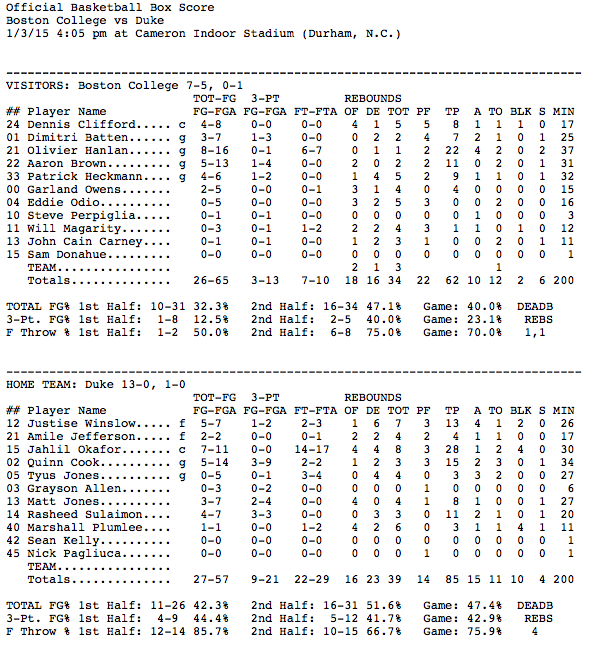