By Brian HoraceJanuary 28, 2014No Comments

Dukes 80-65 win at Pitt was just what the doctor ordered for Duke. A tough road win in a tough environment against a ranked opponent. I for one have to admit that I didn’t give Pitt very much credit, but this team played Syracuse very well and gave Duke all it could handle for most of the game. Pitt was much better than I expected from mid-range they hit big shot after big shot, but Duke would counter. It was punch for punch for the entire first half and the first half of the second. Duke would pull away on the strength of the 3 point shot. Duke would use its pressure defense in tandem with hot shooting from Senior Andre Dawkins from beyond the arc. In just 15 minutes Dawkins could score 20 point on 7 of 9 shooting and 6 for 7 from 3 point range. Duke would need those shots from Andre in the second half to get a working margin and put offensive pressure on Pitt. Statistically Duke did not overwhelm Pitt, out-rebounding the Panthers 26-22 and actually hitting on 7 less free throws than Pitt. Where Duke did dominate was from beyond the arc. Duke would 39 to 15 edge in points from 3 point range. The other difference down the stretch Duke was able to get stops. Something that for most of this year has eluded the Blue Devils.

In a surprise Duke would not start Quinn Cook, or Matt Jones, choosing to go with Tyler Thornton and Rasheed Sulaimon. Quinn is nursing an ankle injury and Jones hasn’t had great games in ACC play. Cook would still play 27 minutes in the win. Matt Jones would only manage 5.

Along with Andre Dawkins, Jabari Parker was a difference maker in this game. While he didn’t shoot a great percentage he was able to score 21 points to lead all scores and pull down 11 rebounds for the Devils. Rodney Hood would hit on 5 of 10 from the floor and score 13 points, Hood also dished 4 assists. Hood hit a huge three in the second half to help Duke stay a step ahead of Pitt. Duke got a huge effort and game from Amile Jefferson who has been playing his best basketball in the last month. Jefferson was 5 of 5 from the floor and 4 of 5 from the foul line. Jefferson would score 10 points in the game and also pull down 10 rebounds for a double-double to compliment Jabari Parker’s.

Congrats to Jabari Parker for breaking the Duke record for most 20 point games in a season by a freshman. 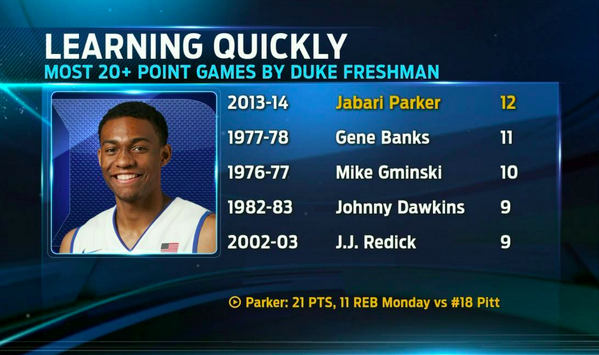 Kudos go to Rodney Hood who delivered a stellar defensive effort against Lamar Patterson, holding Pitts leading scorer to 14 points on 4 of 14 shooting and 1 of 5 from 3 point land and 5 turnovers.

Quinn Cook did not score in double figures, but what he did give Duke was 9 points and 6 assists while only turning the ball over twice. It’s clear that Quinn Cook is the guard that makes the offense go. When Quinn is out of the game the offense tends to stall and stagnate. As much as I love seeing Quinn score a lot of points, I like to see him pick and choose his spots. He has gotten infinitely better at making a play when things are breaking down for Duke and when Duke is late in the shot clock. He, along with Rasheed Sulaiman are the only Duke guards at this point who can break down a defense off of the dribble.

Marshall Plumlee once again gave Duke good minutes, 12 to be exact. Plumlee did not scratch the scoring column but his defense that doesn’t appear in the stat line was important for Duke. Plumlee is a weapon in trapping situations and Duke would use it to rattle Pitt at times. Plumlee did manage to pull down 4 rebounds.

Rasheed Sulaimon did not shoot well for Duke going 1 of 7, but he did contribute with 4 assists. 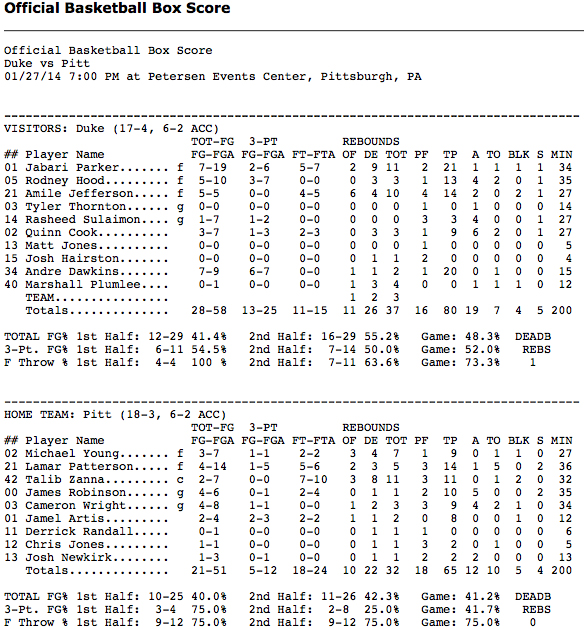