By Brian HoraceNovember 7, 2018No Comments 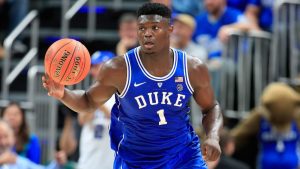 I’m not sure anyone in any shade of blue was expecting Duke to come out as sharp as they were against the Kentucky Wildcats last night. In an utter annihilation of Wildcats, the Blue Devils on the 2018-2019 campaign introduced themselves to a national audience. Duke ran away with this one 118 to 84 – and it may have not even been that close. Duke dominated in every facet of the game from tip to handshake, never trailing in the game. There was no singular moment where Duke asserted themselves but just a methodical business like approach with some flashes of “Oh my God” sprinkled in.

Zion Williamson did not lead Duke in scoring but did lead Duke in, “how did he do that“, moments. The freshmen did score 28 points in his college basketball debut and seemed to do it with relative ease. Williamson scored in every way imaginable, from highlight dunks, to hitting a 3, to cashing in at the charity stripe, to some nifty post moves against taller players. He even hit a contested mid-range jumper. In one sequence that brought most Duke fans out of their seats, Zion grabbed an E.J. Montgomery shot seemingly right out of mid-air and started the fast break, he then fed (through traffic) a perfect pocket pass to fellow freshman R.J. Barrett to an and-1 bucket. It was impressive. It was just different. Williamson added 7 rebounds, 2 assists, a block and a steal to his 28 points.

R.J. Barrett paced the Blue Devils with 33 points – the most ever in a freshman debut at Duke.Barrett was an efficient 13-26 from the floor. He also added 6 assists to only 2 turnovers in his first official college start. Some of the knock on Barrett – and there is very little to criticize is that he plays too much hero ball, sometimes over penetrating into the teeth of a set defense. None of that was apparent at all last night. Barrett played a good floor game and was a very willing passer when he needed to be.

Only being grouped next to Zion Williamson and R.J. Barrett can a 22 point college debut look pedestrian but Cam Reddish, who comes off more like a silent assassin to Barretts brashness, had just that. It was a quiet 22 points but still a more aggressive Cam Reddish than we’d seen. Reddish will always be the type of player that picks his spots but when he picks them – he picks them well. Reddish went 6-14 from the floor and an impressive 7-7 from the foul line. He also added 3 assists and 4 steals for Duke in 24 minutes of play. The trio of Reddish, Williamson & Barrett combined to score 83 points to Kentucky’s 84.

The catalyst for this Duke team is the point guard spot, certainly either one of those high scoring freshman can run the point if need be but having a heady and wise point guard in Tre Jones gives the Blue Devils the added dimension to be special. Jones is smart with the ball and realizes the strengths of his floor mates in ways Duke hasn’t had in the past few seasons. Jones scored 6 points in this first game of the season but the most impressive and important stat was his 7 assists and 0 turnovers in 30 minutes of play. The unsung part of Jones’ game is the consistent ball pressure he puts on opposing guards, it may not show up in a stat line but his ability to pressure the ball gives players like Barrett, Reddish and Williamson the chances to shoot gaps, get in the passing lanes and get deflections.

Duke also got key contributions from some familiar faces. Marques Bolden was as engaged as he has been in a Blue Devil uniform, getting the start for Duke. Bolden went 3-4 from the floor scoring 7 points and pulling down 4 rebounds. Bolden defended well in the game adding 1 blocked shot. It was clear to see why Bolden got the start over fellow junior big Javin DeLaurier who came off the bench but also defended well albeit with foul trouble for most of the game. DeLaurier did have two steals in 11 minutes of action.

The Blue Devils will go as far as their bench takes them so getting key minutes and contributions from Jack White and Alex O’Connell will be crucial as the season wears on. White led the Blue Devils in rebounding coming off the bench with 11, the junior swing man also added 9 points on 4-8 shooting. Alex O’Connell should also figure into what the Devils due on the perimeter. O’Connell may be Duke’s best threat from outside and he cashed in on his 11 minutes of action going 3-6 and 3-4 from the 3 point line. O’Connell added 3 rebounds to his 9 points.

It’s very easy based off of one game to start throwing out comparisons and expectations and that is always fools gold. Duke had a very strong start to the season but I will say the same thing I would say if they had lost the game: In the grand scheme of things this game means very little. It was fun to watch but a body of work is what Coach K and Duke are building towards. This will not happen every night. Duke is not as good as they looked and honestly Kentucky isn’t as bad as they looked. There are plenty of things for Coach K to watch and get his team to improve on and even with the win there is still a long way to go. Things like this tend to even out. No team is who they are going to be but it was definitely a fun night to be a Blue Devil.