By Brian HoraceDecember 10, 2018No Comments 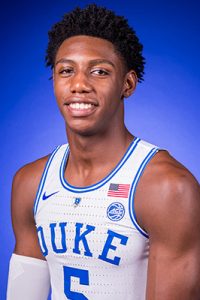 Greensboro, N.C. (theACC.com) – Duke’s RJ Barrett has been named both the ACC Player and Freshman of the Week following a pair of outstanding performances this past week.

ACC weekly honors are determined by a vote of a 15-member media panel and are announced on Mondays throughout the regular season.

In winning his second-straight Freshman of the Week honor, Barrett averaged a double-double as No. 3 Duke (9-1) extended its winning streak to four games with a pair of non-conference wins this week.

The Mississauga, Ontario, native averaged 28.5 points, 11.0 rebounds and 5.0 assists, including a 30-point effort against Yale and a career-best 15-rebound performance against Hartford. In Saturday’s Yale win, he became the first freshman in Duke history to post a 30-5-5 game with his 30-point, 7-rebound, 6-assist effort in the 91-58 victory.

In 36 minutes against Hartford on Wednesday, Barrett was an efficient 10-of-14 from the field and 3-of-4 from three-point range, scoring 27 points, with 15 rebounds and four assists for his first career double-double.