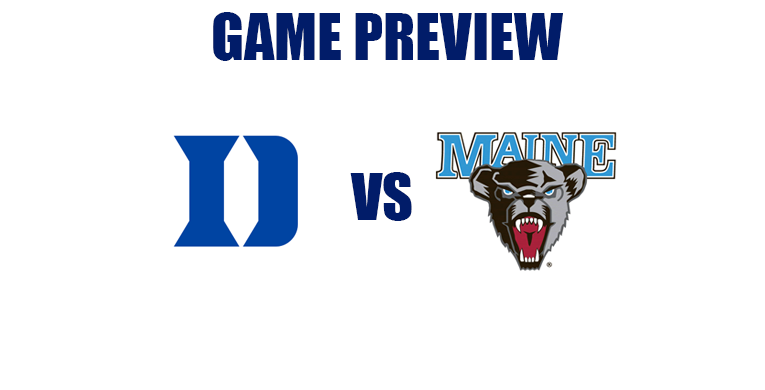 By Randy DunsonDecember 2, 2016No Comments

The Blue Devils return 10 letter winners and three starters from their 2015-16 squad, which finished

non-conference games at home, enter at 7-1 overall after most recently defeating Michigan St.

Luke Kennard who checks in at 17.5 point per game to go along with 6.6 rebounds. Grayson

from the free throw line and a team-high 3.6 assists. Freshman Frank Jackson is adding 15.4

Jefferson is nearly averaging a double-double as the big man enters action at 14.0 points per

game to go along with 9.9 rebounds. Jefferson leads the team with 16 blocks. Senior Matt Jones

rounds out the Blue Devils’ double-digit scorers at 10.4 points.

The Blue Devils feature an excellent offensive game as it ranks 29th in the country at 84.6 points

per game. The Blue Devils rank 36th in the country and lead the ACC in 3-point attempts

likes to shoot from outside, Duke is also highly successful from the free throw stripe.

ranking 16th and 21st nationally in the stats, respectfully, and shoot 72.7 percent from

the stripe. The Blue Devils are stellar on the boards where they average 39.4 per game

State on Wednesday. Freshman Andrew Fleming had a career night for Maine, leading

boards. First-year Black Bear Ilker Er chipped in 11 points for Maine which struggled from the

among America East scoring leaders, has finished with double-figures in five of Maine’s first

seven outings. Myers ranks third on the team with 5.3 rebounds and has taken care of the ball

Fleming is adding 10.7 points and is Maine’s leader on the boards, averaging 5.4 per game to

sit him 12th in the league. The freshman big man has controlled the paint for Maine as he is

second in the league with six blocks and has been consistent with his finishes, ranking fourth

in the league at 59.6 percent from the floor.
Ilker Er is adding 9.9 points and is Maine’s deep threat, ranking second in the league with 23 makes from beyond the arc.

As a unit, the Black Bears are averaging 74.3 punts per game. Maine ranks second in the league

on the offensive glass, checking in 55th in the nation at 13.3 per game. The Black Bears 96th

Grayson Allen keeps putting up huge numbers for No. 5 Duke. Imagine how much more impressive they might be if he were healthy enough to practice.

Allen has been dealing with lingering foot injuries for the past two weeks, with coach Mike Krzyzewski saying he hurt his toe before the Penn State game on November 19 and limped through the Rhode Island game the next day. He checked out of the Appalachian State game early three days ago when he reinjured the toe.

“Grayson does not practice one second,” Krzyzewski said. “So when he’s out on that court, it’s a gutty performance. … That kid has played unbelievably, and he’s limping.”

Amile Jefferson had 17 points and 13 rebounds while freshman Frank Jackson finished with 11 points and keyed a timely 11-0 run for the Blue Devils (7-1), who won their fourth straight despite shooting just 27 percent from 3-point range.

Neither team led by more than four before the Blue Devils broke a 48-all tie by reeling off 11 straight points, a run that coincided with a series of Spartan slaps to the floor, one of Duke’s trademark moves.

Seconds after Bridges gave the floor a firm slap, Jackson blew past the Michigan State guards for a layup that gave Duke its largest lead to that point, 55-48, with just under 13 minutes left.

Freshman Andrew Fleming poured in a career-high 20 points but it was not enough as the University of Maine men’s basketball team dropped an 82-61 decision to visiting Central Connecticut State University at the Cross Insurance Center on Wednesday evening.

Fleming added eight rebounds to his career night after finishing 8-for-13 from the floor and 4-for-7 from the free throw line. Junior Ilker Er tallied double-digits for the second-straight showing, finishing with 11 points and four boards.

Statistically, Maine won the battle inside, finishing with a 38-32 advantage on the boards and a 38-32 scoring mark in the paint. However, CCSU forced 16 Maine turnovers and completed action with a 19-9 edge in points off from the Black Bears’ mishaps.

For the game, the Blue Devils (playing a Blue Devils team back-to-back!) went 33-for-56 from the floor (58.9 percent), including knocking down 10-of-14 from beyond the arc. Maine finished action 25-for-64 in the field and struggled from long-range (4-for-19), including a 1-for-8 showing in the second half.

The Blue Devils took advantage of a great first half, shooting 61.5 percent from the floor to jump out to a 41-24 lead at the break.

Back and forth, action was featured over the opening seven minutes of action. Ryan Bernstein’s jumper gave Maine a short two-point edge before the Blue Devils snatched the lead on a 4-0 run. The third tie of the game came just over six minutes in when Fleming finished a layup on a fast break feed from Jaquan McKennon.

Back-to-back 3-pointers by the Blue Devils started a 15-3 run, ending with the visitors on top, 30-18 with just over eight minutes left in the first half.

Maine responded with a triple from Er before a free throw by Wes Myers brought the Black Bears within eight.

Maine chipped the deficit down to 12 with 13 minutes to play after putting together a 9-3 run, keyed by four points from Marko Pirovic before an impressive put back slam by Fleming.

However, the Black Bears failed to close the gap any further. CCSU elevated the spread to its largest advantage of the game, 78-55, with 2:30 to play before closing out an 82-61 victory.

This is the first time that these teams have played.

In terms of overall statistics, Duke overwhelms MSU in most all categories. Some stats of note include scoring margin, rebound margin, FT%, & most particularly TO/GM (Margin) where Duke far excels as MSU turns the ball over at a very high rate.

When analyzing the 4-factor data, it is apparent that Duke overwhelms Maine except in offensive rebounding, where they equal. The Black Bears have a big frontcourt, starting three forwards. Duke gets to the line much more than Maine, 42.4 vs. 25.3. The Blue Devils also shoot ball much more effectively,

When it comes to effective field goal percentage (eFG%), the teams are evenly matched. However, Duke far exceeds the Spartans in all categories including a large lead in offensive rebounding.

The Maine Black Bears are 2-5 this season and they have lost 4 of their last 5 games. Maine is averaging 70.7 points per game and they ae shooting 40.2 percent from beyond the 3-point arc and 31.9 percent from beyond the 3-point arc while defensively they are allowing 78.8 points per game and their opponents are shooting 48.4 percent. Wesley Myers leads the Black Bears averaging 12.7 points and 5.3 rebounds per game. Andrew Fleming is averaging 10.7 points and 5.4 rebounds for the Black bears, Ilker Er is averaging 9.9 points, and Marko Pirovic is averaging 8.6 points and 5.4 rebounds. Maine hasn’t held up well against soft competition and likely they are in deep trouble here.

Junior guard Wesley Myers is the leading candidate to test Duke’s man-to-man defense Saturday. The Niagara transfer averages 12.7 points per contest and shoots 40.0 percent from 3-point range. Freshman forward Anthony Fleming is the team’s main threat down low with 10.7 points per contest and a 59.6-percent shooting clip, but the rookie could struggle against the savvy veteran Jefferson at just 6-foot-7 and 222 pounds.

One advantage Maine could have is its depth. Twelve Black Bears average at least 10 minutes per game, but Maine will have to find consistency to stay in Saturday’s contest.

Of note is as Marist did in Duke’s regular-season opener, Maine is expected to protest North Carolina’s controversial House Bill 2. USA Today reported Thursday that the Black Bears will wear black and rainbow-themed warm-up shirts to protest that the law that limits protections for LGBTQ people and requires transgender people to use public bathrooms corresponding to the sex on their birth certificates.

The good news for Duke is that they are putting it together as a team. After a very flat first half against Michigan State, the Blue Devils made adjustments and took the game over.

This game will be a test of continuity – can the adjustments made in the Michigan State game carry over? If Duke can find consistently then the rest of the non-conference opponents should be fearful.

When Duke has had issues, they have been their own worst enemies. If Duke defends, stays engaged and takes care of the basketball then they should cruise.

Even though Maine goes deep and has a productive frontcourt, but even with Duke pulling their starters early this should be a mismatch from start to finish. Look for Duke to run away and hide, 91-65.