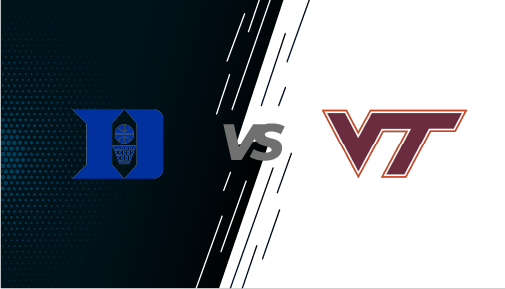 By Brian HoraceDecember 21, 2021No Comments

When they’ve won it’s; been their ninth-ranked defense that has been the star. They allow just 56.5 points per game and their opponents are shooting .396 from the field and just .255 from three-point range (No. 8 nationally). As a team the Hokies shoot 40% from 3-point range which is 10 nationally. Senior Keve Alluma, who has a pair of double-doubles this season, leads the team in scoring at 14.2 points. Alluma is their most dynamic player who has range out to the three-point line, he could be a matchup problem for the Blue Devils young front court. Grad student Justyn Mutts pulls down a team-best 7.4 rebounds per game to go along with his 9.4 points per game, Mutts also leads the team in assists at 2.8 per game.

The 10-1 Blue Devils wrapped up the non-conference schedule with a 87-56 win at home against Elon in a replacement game. Going into their fist ACC game against Virginia Tech Duke is on a 3-game winning streak. Duke is 50-18 all-time in ACC openers, including 31-10 in ACC openers under head coach Mike Krzyzewski.

Banchero, a freshman, leads the Blue Devils in rebounding at 7.3 per game. Trevor Keels rounds out Duke’s scoring leaders with 12.6 per game to go along with his 3.2 assists. Keels is the third different Blue Devil to be named ACC Freshman of the Week this season, earning the honor this week after averaging 14.7 points and shooting .522 from the field in Duke’s three victories in five days last week. Keels’ 2.0 steals per game lead the team and rank fourth in the ACC, while his +2.5 assist/turnover ratio is fourth in the league. He is the only Blue Devil with a three-pointer in every game this season. Sophomore Mark Williams leads the ACC and is ranked 13th in the NCAA with 3.0 blocked shots per game. Williams has swatted multiple shots nine times this season and 19 times in 34 career games.

Freshman AJ Griffin is averaging 11.7 points over Duke’s last three games and shooting .632 from the field, .545 from three-point range with 11 rebounds, seven assists and no turnovers in that stretch.

Jon Scheyer spoke on AJ Griffin’s development and what it means for Duke.

Rebounding has been an area of concern for the Blue Devils, they’ve been out rebounded in 5 of 11 games so far. Duke is only +2.9 in rebounding margin currently. Associate Head Coach Scheyer spoke on Duke’s rebounding in advance of the Virginia Tech game.

Duke defensively has to be disciplined. Virginia Tech is a good cutting team, and a great team passing out of the post for 3-point shots. They are an older team and like the Blue Devils they don’t turn the ball over. If the Blue Devils can guard the post without needing a double team it would bode well for them. Duke’s perimeter defense should be able to contain Hokies shooters but if they don’t it could be a long night and a dog fight. Keve Aluma will garner a lot of attention from the Blue Devils, he’s a dynamic player and crashes the boards hard. He’s a mobile big with the ability to get Duke into foul trouble. Duke has had issues rebounding the basketball on the defensive end in particular, if they do not box out and find players to put bodies on Aluma will feast on put-backs.

Offensively, again, Duke must be disciplined and shot selection will be critical. Virginia Tech is a superb defensive team and they do not let teams shoot a good percentage. Duke coaches drilled the team on taking team shots, good threes, open 3’s and ball movement. This will be critical to get Virginia Tech defense scrambling.