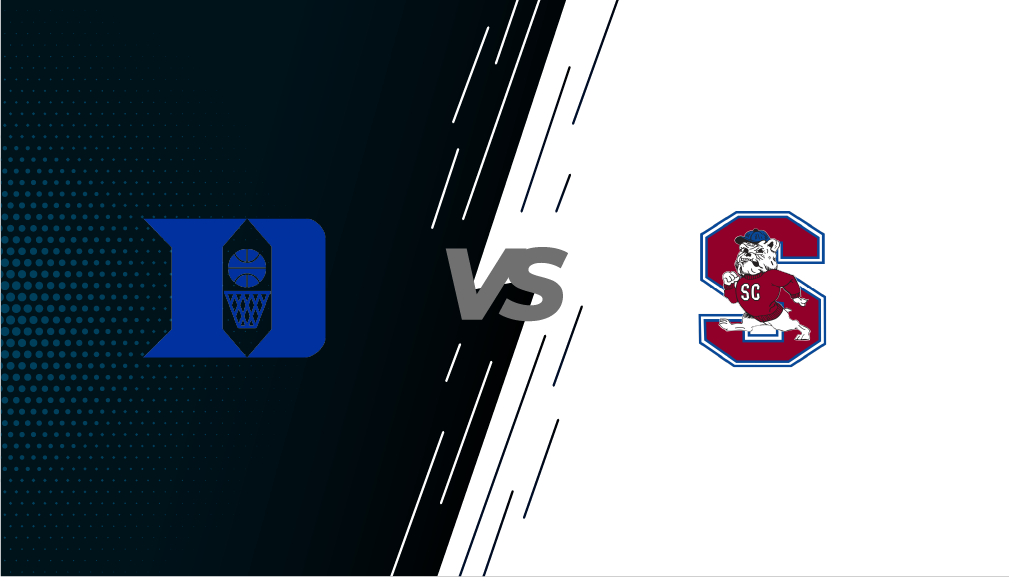 By Brian HoraceDecember 13, 2021No Comments

Breaking: The Blue Devils will be without reserve big man Theo John who is nursing a back injury

South Carolina State has been a struggling basketball program not having posted a winning record since the 2015-16 season. Last year was historically bad as they were just 1-17 overall and 1-7 in the Mid-Eastern Athletic Conference. That horrific season prompted the school to let go of coach Murray Garvin. Under new Coach Tony Madlock the Bulldogs are still struggling on the season, currently 3-7 overall.

The Bulldogs have won two straight coming into Tuesday’s game. After beating both the University of South Florida by buzzer beater on the road, where freshman T.J. Madlock nailed an off-balance three from the corner with 0.6 seconds left for the win, and another 1 point victory against High Point University, the Bulldogs are looking to bring that magic to Cameron.

Sophomore Cameron Jones leads the team in scoring at 11.5 points but is shooting only 38% from the floor. The son of the coach, T.J. Madlock, leads the team in both assists and steals at 3.1 and 1.5 respectively. Madlock checks in second in overall scoring at 9.3 points per contest. Unfortunately for the Bulldogs, they have one of the worse field goal percentages in the nation at 37% and are giving up 44% shooting. They are turning the ball over at just under 14 per game with 11 assists. Where the Bulldogs are shining this season is on the offensive glass where they are top 70 in the nation. It’s going to be a point of emphasis for both teams.

Duke is entering Tuesday, coming off of a long 2 week break as well as a loss to Ohio State where they blew a 15 point lead. Duke has used this break to work on aspects of their half-court offense which floundered in the second half of the Ohio State matchup. The Blue Devils went for large swaths of time unable to put the ball in the basket against the Buckeyes and found themselves in foul trouble for most the game.

The Blue Devils are led by the duo of junior Wendell Moore Jr. and Paolo Banchero who both are averaging 17.8 points per game. Banchero leads the team in rebounding at 7.3 per contest and Moore is the teams leading assist man at 5.6. The Blue Devils are top 10 in points per game and have been one of the nations top ball-handling teams in the nation, ranking second in the NCAA in assist/turnover ratio (+2.07), fourth nationally in fewest turnovers (8.5), eighth in turnover margin (+6.4) and 17th in assists per game — the Blue Devils lead the ACC in each category.

The Blue Devils have posted a positive assists-to-turnover ratio in each of the last seven games after starting minus-1 in the opener against Kentucky (eight assists, nine turnovers) and assisted on at least 44 percent of its field goals in every game since the opener (eight assists on 25 field goals vs. Kentucky) — and has been 64 percent or better four times this season. Duke is forcing 14.9 turnovers, averaging 9.1 steals and owns a +99 margin in points-off-turnover scoring (152-53). According to KenPom, Duke is second nationally in offensive turnover percentage (11.8), owns the nation’s ninth best steal percentage (6.2) and is 68th in assist percentage (56.2).

Keys to the game

With the ACC season about to kick-off for the Blue Devils the task at hand and the keys for this game as well as the next 2 become very simple. Duke needs to develop some offensive consistency when they are not getting into transition. A lot of developing offensive consistency in the half-court will begin and end with guard play. Duke will work on getting their perimeter players to focus on ball-movement as opposed to ball-watching. Duke perimeter guards have been complacent with taking tough shots instead of working for better ones for themselves and their teammates.

Assistant Coach Nolan Smith has emphasized that the Blue Devil backcourt needs to:

There are a couple of ways this game in particular could end up closer than expected and that is on the boards. The Bulldogs are an excellent offensive rebounding team and live off of second chance points. Duke has had issues rebounding the basketball and for them to take care of business and end this game quickly they have to respect the Bulldogs and bring energy and effort on the boards.

I’m not sure there is an x-factor but part of Duke’s planning and what they want to get out of this next stretch in the non-conference is to get some meaningful time for freshman AJ Griffin. A lot of that will depend on Griffin himself being acutely aware – especially on the defensive end. When Griffin has had his time on the court cut short it was due to defensive lapses. So not only was this 2 week stretch important for him in terms of his development but this next stretch of games is crucial for him going into ACC season. The coaches desperately want AJ to be a factor not only for his abilities on the court but also for what it means in terms of building depth and being able to rest guys to prevent wear and injury.