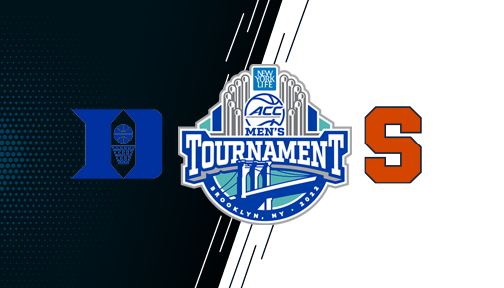 By Brian HoraceMarch 9, 2022No Comments

Duke in the ACCT

Entering the ACC Tournament as the overall No. 1-seed and the outright ACC regular season champion, No. 7 Duke battles Syracuse on Thursday in the quarterfinals at 12 p.m.

Syracuse entered the ACC Tournament on a 4 game losing streak but exorcised those demons against a hapless Florida State team. The Orange dominated the Seminoles winning 96-57. They were able to hold FSU to just 32.4% shooting including 8% from the 3-point line while shooting over 50% from the field themselves.

Cole Swider led the Orange with a game high 28 points, going 9-15 from the field and 4-6 from beyond the arc.

On the season Buddy Boeheim led the Orange in scoring with 19.3 points per game. Joe Girard was the leading assist man at 4.2 per game, adding 13.4 points tying him with senior Swider for second on the team. Swider also leads the team in rebounds at 6.6 per game.

Duke closed the season winning seven of its last eight games, including eight consecutive road ACC wins. The Blue Devils played eight of their final 12 games this season away from Cameron Indoor but the Blue Devils have some demons of their own to contend with dropping their last regular season game by double digits to rival UNC in Coach K’s Cameron curtain call. The Blue Devils own the ACC Tournament’s most wins (105), best winning percentage (.700) and most titles (21). Under Mike Krzyzewski, Duke is 67-23 (.744) in the ACC Tournament with 15 titles — the most by a coach in conference history.   Duke’s win over Kentucky in the Champions Classic at Madison Square Garden in November was the program’s 100th all-time game in the greater NYC area (73-27, .730). That includes 45-25 in NYC, 7-1 in Brooklyn and 21-1 in East Rutherford, N.J.

Over the last six games, five different Blue Devils led the team in scoring, including freshman Trevor Keels’ career-high 27 at Pitt on March 1. For the season, Duke has five players averaging double figures in points, led by freshman Paolo Banchero’s 17.1.   Banchero was a third-team All-America pick by the Sporting News — the 75th All-American in program history (52nd under Coach K).

Duke vs Syracuse: Keys to the Game

Duke has been able to handle Syracuse with relative ease this season winning by 20 or more in both games. If Syracuse is playing like they did against a normally decent defensive FSU team they may have very well found some renewed fire. Duke matches up with Syracuse very well and pressuring their backcourt has paid dividends, turning starting point guard Joe Girard over 3 times in the first game and 4 times in the second game. Shooting versus the zone has also worked out in the Blue Devils favor as they’ve averaged 42% from beyond the arc in their two meetings. Duke has held Syracuse to 22.5% shooting from beyond the arc this season. The Blue Devils have also controlled the boards out-rebounding the Orange by 23 combined in 2 game.

There are several other variables at play: