By Brian HoraceMarch 14, 2015No Comments

Not the ending that Duke wanted losing to Notre Dame 74-64 but keep in mind that there is still at least one more game to play. Duke got out to a very slow and lethargic start to this game and while we as fans want to blame it all on Duke being “uninterested”, they were just outplayed by a good Notre Dame team. Pure and simple. Yes Duke’s effort in the first half could be questioned, even Coach K was seen lamenting it from the sidelines. Notre Dame came ready to play and Duke seemed to be going through the motions. Duke did not defend well in the first half at all and with each easy pathway to the rim their confidence grew. Duke could hit nothing and it showed on the faces of each player, the despondent look permeated the entire bench and coaching staff – it just wasn’t Dukes night. Notre Dame kept the normally volume shooting Duke guards off of the 3 point line, only allowing 4 shots from 3 in the first half. Duke would go 1 of 4, but unfortunately for Duke they weren’t much better from within the arc in the first half, going 11 of 27.

Duke ended the first half down 15.

Duke battled in the second half chipping away, slowly, methodically. Justise Winslow had an atrocious first half, seemed to be playing a different game than everyone else. The freshman forward looked lost. In the second half it seemed someone plugged the freshman back into the outlet and he began to assert himself on both ends of the floor. Winslow scored 11 second half points and seemed to shake off whatever funk he was in.

Duke continued to take what the Notre Dame defense gave them, which was feeding the ball to big man Jahlil Okafor. Okafor was never doubled and per Mike Brey’s plan he was allowed to get his touches instead of letting Duke get off from 3 point range. Okafor did his damage with 28 points but went 2 for 8 from the free throw line, missing two big shots during the Duke come back.

Unfortunately for Duke it came down to the lack of 3 point shooting, when Duke did finally get open looks, the shots did not fall with enough regularity. Duke ended the night shooting only 17.6% from beyond the arc. Another telling stat for Duke was the lack of bench production. Having only 8 scholarship players means that bench points are paramount and Duke only managed 4 in 28 combined minutes for Marshall Plumlee, Grayson Allen and Amile Jefferson. Each player has shown flashes during the season, Plumlee and Allen as of late and Amile earlier in the year but this game the bench proved to be a liability for Coach K.

The only positives you can take form this game is that Duke did not fold up, they battled in the second half getting this Notre Dame lead down to 4. Duke just could not get the stops it needed to get over the hump and while most will say this loss is particularly tough it probably was bound to happen after 11 straight wins. This loss gives Coach K and the Duke brain trust something to take into the tournament practices. Something to draw from, to prepare against.

And I refuse to be one of the fans downing senior guard Quinn Cook, I have enjoyed watching him play for 4 years. I think no less of him for not getting to see an ACC banner raised during his tenure at Duke. Being a 4 year player in the age of the one and done, especially being a guard is tough. Dealing with 4 completely different teams in 4 years, seeing personnel come and go…these are not easy things to adjust to year in and year out. I applaud the class in which Cook has handled not only the vitriol thrown his way but the amount of disappointment he has had to endure. These things will and have made him stronger. 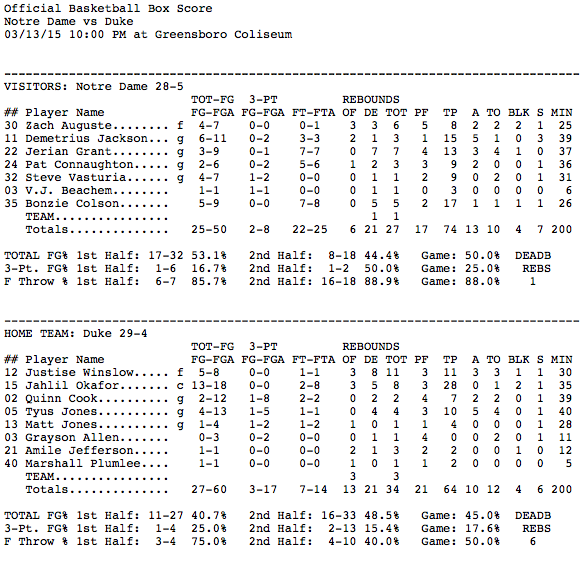