By Randy DunsonDecember 18, 2014No Comments 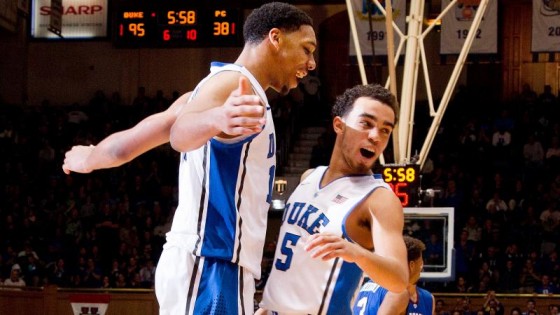 DURHAM, N.C. – Much of Duke’s success this season can be attributed to the strong play of two newcomers, freshmen Tyus Jones and Jahlil Okafor. The tandem has made an immediate impact on the team this season, with Okafor’s points per game (18.0) ranking second in the conference and his shooting percentage (.655) leading the ACC. Jones also leads the conference with an assist/turnover ratio of 4.17:1 and ranks second in assists per game (5.56).

Duke head coach Mike Krzyzewski and assistant coach Nate James share their thoughts on what Jones and Okafor bring to the team this season. Jones and Okafor join the conversation and reflect on their experiences in the early portion of the season, and discuss how the college game differs from high school play.

Two new features from the Coach K show will be available each week throughout the season on GoDuke.com