By Brian HoraceDecember 18, 2014No Comments

Duke grits out a tough game against UCONN and gets the win 66-56. Duke played a very hungry and pesky UCONN team lead by Ryan Boatright who scored 22 of this teams 56 points. Boatright was also responsible for 4 steals and kept Duke off-balance on both ends of the floor. Duke turned the ball over 19 times and while some were unforced most were attributable to a very wily UCONN on the ball defense. It was noted at half-time  by Coach Capel that Duke was clearly knocked back and very loose with the ball against a team known for taking it away.

UCONN used a variety of defenses against Duke sometimes switching possession by possession. It kept Duke confused and unsteady in the first half but after a UCONN run tied the game in the second half Duke seemed to put things together, crucial to Duke’s efforts was shoring up the turnover deficit. After turning the ball over 12 times in the first half, Duke only had 7 turnovers in the second. Duke had 5 players in double figures in this game lead by freshman Tyus Jones who scored a team high 21 points. Tyus did most of his damage from the line going 9 of 10 from the charity stripe. Overall Duke shot poorly at 37.5% and a woeful 26.3% from beyond the arc. The UCONN defense was partially to blame but Duke did miss a ton of open shots which may still be from the long layoff after the Wisconsin game. Duke got huge rebounding efforts from both Amile Jefferson and Jahlil Okafor. Jefferson scored 11 points and pulled down 13 rebounds and Okafor scored 12 points on 3 of 5 shooting and grabbed 10 boards. Freshmen Justise Winslow also scored 12 points in the game and had some big moments in the game after a lackluster first half. Winslow hit a timely 3 pointer in the second to extend Dukes lead and also had an electrifying block pinning the ball against the backboard. 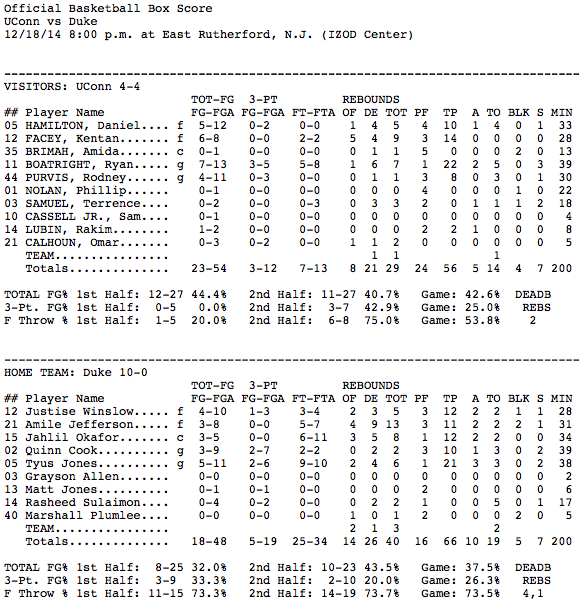