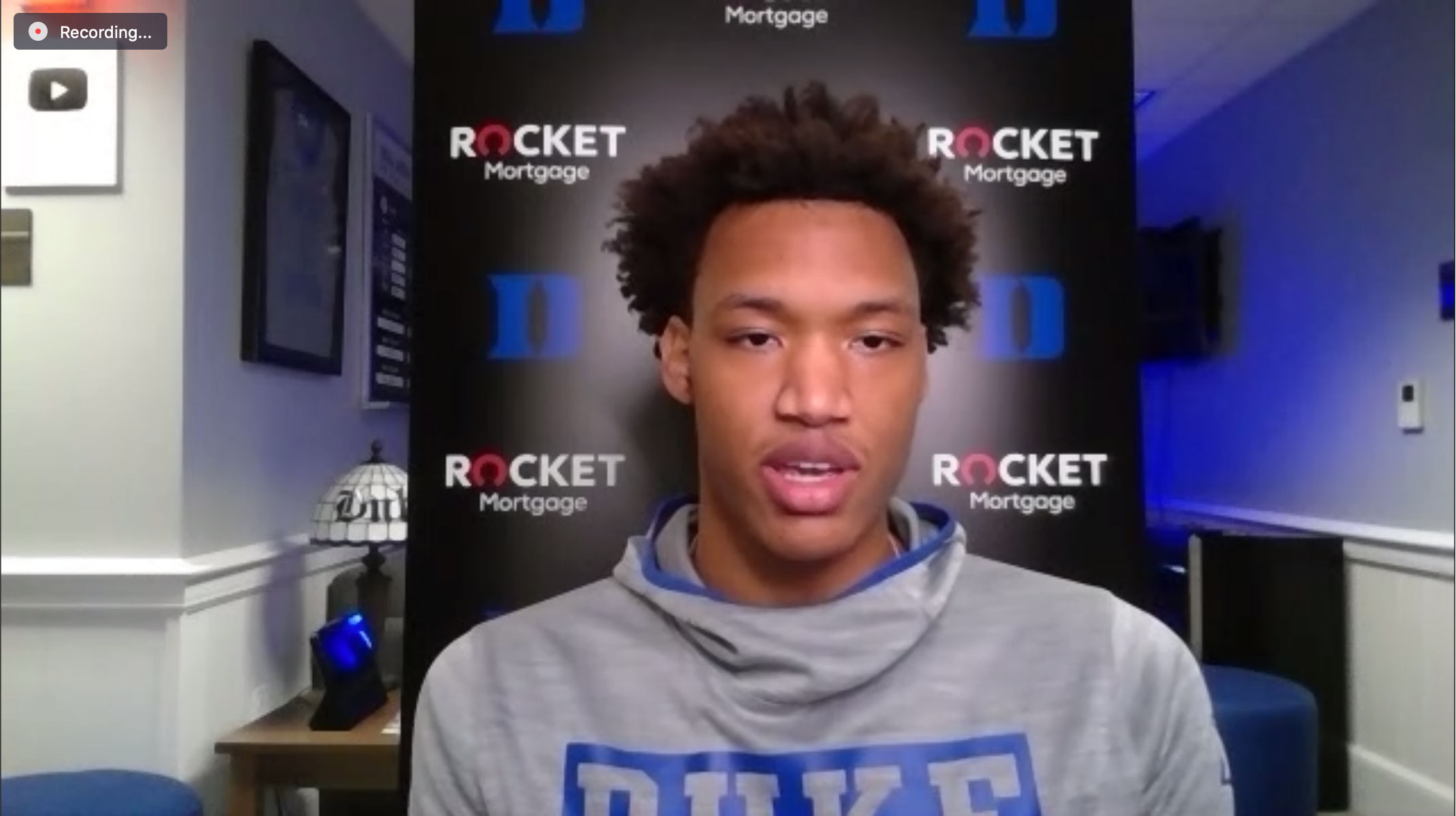 Q & A from Todays Call With Duke’s Wendell Moore Jr.

By Brian HoraceAugust 19, 2020No Comments

On how the opportunity came about for him to be a part of the NABC Player Development Coalition:

“Coach [Mike Krzyzewski] approached me with the opportunity. He figured this would be something that I would be good at and something really just for me to improve my leadership skills and use my voice to be heard throughout the country.”

On if this is building off of the march he organized in Concord, N.C., in June:

“Yeah, for sure. The march was definitely a start to something special that I wanted to do. Having this opportunity really allows me to continue using that platform. With the group that we have in that committee, we’re just doing everything we can to make things easier and better for all athletes in the NCAA.”

On what goals he has as a member of the NABC Player Development Coalition:

“Obviously, this is just the start of something special. We’re kind of the experiment group of guys to hopefully have this become a larger thing and hopefully map it out to be kind of like the NBA Players Union. We want to just have an input in everything that goes in with college basketball, whether it’s how we play our games, how many games we play, the money that goes into it, what happens to the players, what happens to everything – we just want the players to get treated fairly so they don’t feel like they lose interest in their sport early that way. You see guys going to the G League and things like that. We just want to have the opportunity to keep guys in college, because college is obviously a one-in-a-lifetime experience and we want to make it that way for all athletes.”

On what he has seen from the incoming freshman class and how his role as a team leader has increased:

“The six freshmen we have, in my eyes, are second to none. We have versatility [with] all six of them. Patrick [Tapé], even though he’s not a freshman, he’s considered a new guy here and he’s obviously a big piece of what we’re hoping to do here too. Those seven guys have been coming around really well. They’ve been getting better every day. They come here to work and ultimately they all make our team better. From a leadership standpoint, even though I’m only a sophomore here, I’ve been here for a year, I know how the system works, I know the things we do behind the scenes, so I’m just helping those guys get comfortable, especially in an uncomfortable time like this.”

On what specific things were that he wanted to work during the offseason:

“I would probably say the biggest thing for me wasn’t so much my physical abilities or my ball handling or my shooting or dribbling. I think for me, it was more of a mindset thing, just getting into my own headspace where I can ultimately play the game how I want to play – at my speed, at my pace. Just developing that confidence that I felt that I was missing last season ultimately to make me a better player in the long run.”

On what he would think about the possibility of playing college basketball in a bubble environment:

“I feel like here, that’s kind of what we’re doing now. Obviously, we have the money to do that. Some schools might not be as fortunate. I can’t speak for those schools. Obviously, I think the idea of a bubble would be a really good idea, just to isolate all the teams who want to play against each other in that bubble and keep things safe, keep away from the public and just keep us in our own area where we’re able to play the game the right way and safely.”

On how offseason practice and training has been different this season compared to last:

“I would probably say for one, it was a lot different mainly because of the time we got here. We got here almost a month later than we normally do, so we lost a month in preparation and training. But as soon as we got here, it was kind of like wheels going. As soon as we got tested and everybody came back negative, we started training and testing right away. We normally start with our biomechanical testing and things like that, just so they know how we can move and how they can make us better, whether it’s jumping, training, speed – anything like that. The freshmen are really good about it. Another thing that’s been different are all our workouts have been individual for right now. We haven’t had any contact with each other or any live action yet. It’s kind of just been everything individual and everybody working on themselves right now. Everybody is getting better at things that they think that they need to improve on and the coaches are doing a great job of helping them through that. Like I said, the freshmen are picking up everything really fast and really well. This is a good group of guys and they’re going to make us a lot better this year.”

How are you and the team dealing with the uncertainty of whether there will be a season this year:

“We’re really just staying ready, whether we have a season or not we’re going to be ready to play. That’s kind of one thing we focused on is with everything thats happening there’s a lot of uncertainty, things change every day so we just want to ready for when our time comes we’re just going to hit the ground running so we don’t waste any of our time getting ready.”

On playing with confidence and pace:

“Just really keeping everything under control, I feel like times last year I kind of got sped up and things were kind of going too fast in my mind so really having a chance to look at the game kinda slows it down for me so I can see everything thats going on and I need to make the right plays.”

With what you did in Concord and what Coach Smith was doing did you guy collaborate at all in terms of what you were doing with protesting:

“Not at the time, the kind of thing we did was based on our communities we just wanted to get out into our own communities to try to enforce change first before things start happening globally and nationally. Thats the way everything starts, small then it gradually builds up. But since we’ve been back we’ve been in collaboration in trying to get something going here at Duke. We’ve been collaborating. Mainly us two and one of the women’s basketball players have all been in collaboration about what we can do to make something happen on campus.”