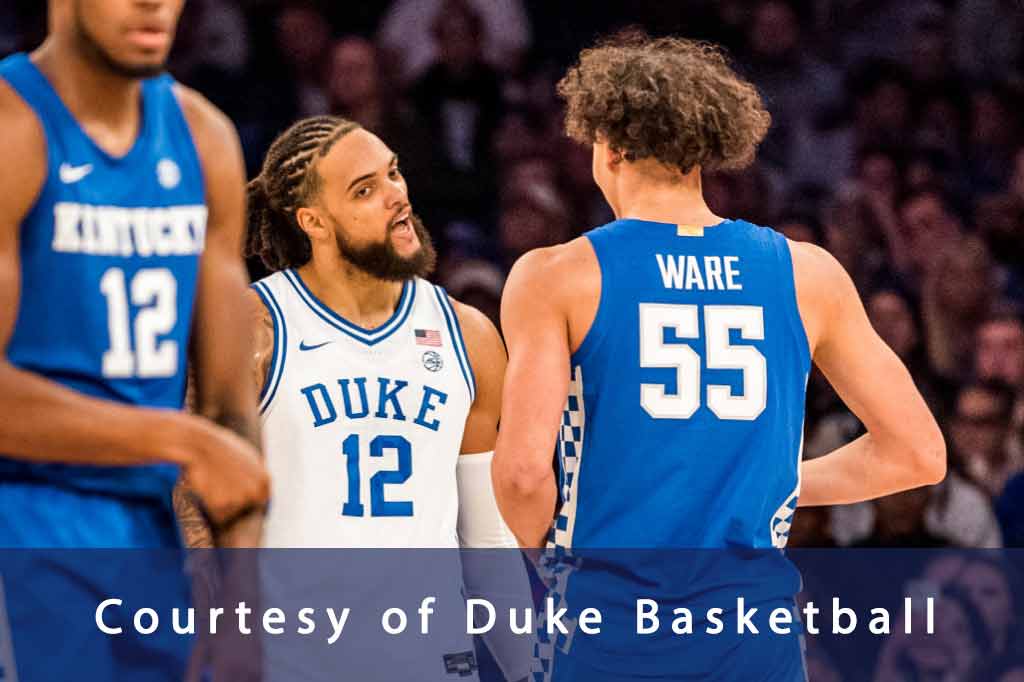 By Brian HoraceNovember 10, 2021No Comments

And just like that the college basketball season began for Coach K’s last season and the return of Duke Basketball. Duke versus Kentucky on the grandest stage – Madison Square Garden. This why you go to Duke, this is why you go to Kentucky. The game did not disappoint.

Both teams came out with energy – this was not going to be a repeat of 118-84 from 2018, both teams came to play. Wendell Moore gave Duke the first lead of the game at 2-0 and Duke never led in the first half by more than 7 and ended the first half with a 4 point lead on the strength of 12 points from Paolo Banchero on his way to 22 for the game. Trevor Keels added 9 in the first half and would lead the Blur Devils in scoring with 25. Banchero and Keels were a formidable 1-2 punch that kept Duke just ahead of the Wildcats for the majority of the game where the Blue Devils led for nearly 36 minutes. The Wildcats would battle back from a 4 point deficit to take a 1 point lead at the 17:24 mark off of a Keion Brooks 3-point jumper assisted my Sahvir Wheeler. The teams volleyed back and forth for the lead with it changing hands 8 times. Duke would eventually pull away building a 15 point lead at the 9 minute mark of the second period. Duke would maintain and win the game 79-71.

Banchero and Keels combined for 47 points in the game. Wendell Moore Jr. added 12 points and 3 assists in his 33 minutes and the trio of Jeremy Roach, Mark Williams and Paolo Banchero grabbed 7 rebounds each with Williams adding 3 blocked shots.

After the game it Coach K’s excitement was clear, “It was an amazing game that felt so good with the Garden crowd and playing against an outstanding team,” head coach Mike Krzyzewski said. “They are tough, and we are tough. That was a big-time game. Really big time.”

This game, even with the win, provides the coaching staff plenty of coaching points to work through. Defensively the Blue Devils did not rebound the ball well giving up 19 second chance points while only scoring 8 themselves. Duke was out-rebouned 44-36 with 19 of Kentucky’s rebounds coming from power forward Oscar Tshiebwe who scored 17 points.

Offensively the Blue Devils had only 7 assists for the game but shot 0ver 50% from the floor. There was a distinct lack of ball movement which can be attributable to both Kentucky’s defense and Duke’s lack of execution. It could very well be this is just a function of it being early in the season and defender being a little ahead of the offense. The Blue Devils have time to figure out who they are going to be offensively but as Coach K mentioned in his presser they hope and expect to shoot much better from the outside and he gave Kentucky credit for shutting that down but also cited a bit of nervousness.

Having multiple players have to exit the game with cramps was fairly unusual and something that K remarked, “we have to figure that out.” Duke will have to definitely work on whatever pre-game routine they have in terms of hydration but I’m certain the heightened sense of excitement probably had something to do with it.

Obviously winning the game always feels good but I’m not sure anyone expected the Blue Devil to have two 20 point scorers against Kentucky – who usually is fairly good at taking away what teams do best. The only other time in history multiple Duke freshmen scored 20+ points in their debut game was Nov. 6, 2018 vs. Kentucky when three scored 20+ (RJ Barrett had 33, Zion Williamson had 28 and Cam Reddish had 22). Keels’ 25 points are tied for the third-most by a Duke freshman in a debut game – Barrett (33), Williamson (28) and Marvin Bagley III (25) vs. Elon on Nov. 10, 2017.

This particular Duke squad also seemed to have a bit of an edge. Both teams fought hard in the game and the chirping by both teams was a plenty which is honestly refreshing to see a little bit of, especially in a big matchup.

The Blue Devils defended fairly well in the game, gave up fairly few open looks from beyond the arc and when Kellan Grady hit a few in the first half Duke did a fantastic job of adjusting to him at the half and shutting the graduate transfer down in the second period. The ability to take these halftime coaching fixes and implement them is a huge coaching point and something the Blue Devils didn’t do particularly well at last season.

The other positive is that Duke withstood multiple runs by the scrappy Wildcats who briefly took the lead in the second half, in fact there were 8 total lead changes in a stretch of a minute or two but instead of panicking or stressing the Blue Devils simply withstood, overcame and build another lead of 15 points. Doing this against what appears to be a bona fide top 10 team is something to definitely laud.