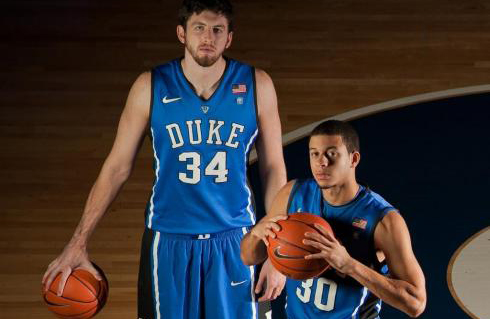 Duke did what needed to be done in Tallahassee, evening up the score versus Florida State. As Duke learned from the game in Cameron, Florida State is tough, and physical – Duke could not play a finesse game and hope to come out with a win. Duke would do its best to turn the tables on one of the best defensive teams in the country by applying its own brand of pressure on Florida State. Duke forced FSU into 27 percent shooting from three while the Blue Devils shot 46 percent. Duke was able to get stops when it needed and kept the rebounding margin close considering the length and size of FSU. Despite a raucous crowd Duke never seemed flustered in the game and was able to counter each run Florida State was able to muster.

Duke did most of its damage on the outside with Andre Dawkins shooting 6 of 9 from 3 point range scoring 22 points. Each time FSU would mount would mount an offensive against the Devils there was Dawkins to match their 2 with a 3 of his own.

Austin Rivers also had one of his best games of the season going for 20 points and 4 assists. Rivers limited his turnovers and shot 50% from 3 point range employing much better shot selection in this game. Rivers was able to weave his way to the rim against the FSU defense and when FSU guarded him for the drive Rivers would sneak behind screens, square up and knock down long range bombs. Duke would need all it could get from Rivers and Dawkins with Seth Curry once again having difficulty scoring over the tall FSU guards only managing to go 2 for 8 in the game, and Mason Plumlee taken out of the game with foul trouble and turnovers scoring only 1 point in 17 minutes. Miles Plumlee however had a strong game with 10 points and 8 boards and was active on each end of the floor. Miles was assertive and strong with the ball despite spending most of the game in foul trouble.

What this win means for Duke is a break in the 3 way first place tie in the ACC it also evens the score with FSU who snapped Dukes 45 home game winning streak earlier in the year. In an environment that Duke over the years has has had a tough time winning it was a very good and important statement by the Devils.

On the tough efforts that both teams gave:
“It was just a great, physical, hard basketball game.Â  With every kid playing so hard, we feel honored to have won that game. It was tough to get shots; our three-point shooting was probably the difference in the game. The two biggest shots in the second half, when they got it down to three twice, was Seth (Curry) and Ryan (Kelly) hitting threes; huge shots.”

On his opinion of Florida State’s team:
“I thought both teams really played winning basketball today. I have so much respect, before and after the game, for their team and their coaching staff. They are legitimately one of the top teams in the country.

“They (Florida State) are as good as anybody that we’ve played. I think Snaer is as good a competitor as there is in our league; Miller is such an offensive weapon, Loucks has had a great year, and their big guys wear you down with James being the best offensive rebounder in the conference. They still have a chance to win the regular season or the tournament in Atlanta. They have a chance to win, I think, and we do too which made this such a terrific game.”

On Florida State head coach Leonard Hamilton:
“I love Leonard (Hamilton). He and his staff, every year, they’re just so sound. And this year I think they just have a little but more magic. That’s why we feel so good about the win; we think we beat a really good basketball team tonight.”

On Duke’s defense:
“I thought Duke’s defensive pressure tonight, kept us out of any type of offensive rhythm. We missed ten free throws we had a lot of looks in the lane in the first half but I thought we came up a little short. We fought back several times, but couldn’t get over that hump tonight. Whenever they had opportunities to get a good look from the perimeter they did. That’s what good teams do and you have to give them credit for that.”

On Duke’s three-point shooting:
“Obviously, they are one of the best three point shooting teams in the country and they have two kids who are tremendously skilled at getting into the lane. Although we defended the two’s well, we had a difficult time keeping them out of the lane. We allowed them to do what they do best and that’s knock down threes.”

More on Duke’s defense:
“I thought we took care of the ball well but we had too many empty possessions. You have to give them credit for that, I thought they defended us well. They defended our system better than we defended their system.”