By Brian HoraceMarch 22, 2014No Comments

Welp..sick of having to say that word this year, I guess that’s the bright side of Duke losing it’s first found game to Mercer 78-71, I don’t have to say it anymore. I can honestly say unlike some Duke loses I had somewhat already resigned  myself to the fact that this game was no gimme and in fact anyone who watched Duke this season  new, and almost expected a meltdown. That is the reality that was this years team. They completely zapped my optimism, that has never happened to me as a fan. Not once. I’m not sure if it’s a function of me getting old or a function of Duke routinely being outplayed by teams with lesser talent. That is not a knock on Mercer, Duke was legitimately the team with the more upside and NBA prospects but time and time again this year Duke relied on talent as a crutch and a replacement for hard work and getting their hands dirty. Teams that blend talent, scrappiness and execution are the teams that are still playing. This team never grasped defensive principles and was consistently a step slow, or not dialed in. They didn’t close out well, they were out of position, didn’t move their feet well and just weren’t tough enough. Offensively Duke settled and relied too much on jumpshots, the team that plays aggressively and gets to the line but moreover EASY attempts are the ones that continue. 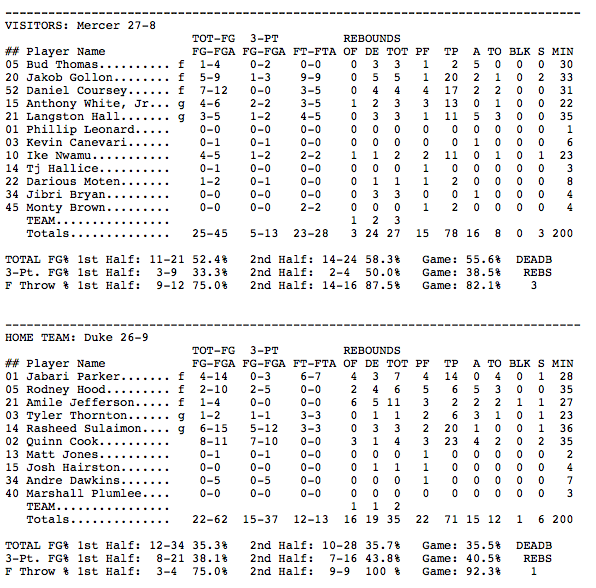 Two guys showed up in this game, it was Quinn Cook who scored 23 points and dished 4 assists and Rasheed Sulaimon who scored 20 and began the game with a flourish. Unfortunately for Duke the other guys did a lot to watching. The big guns for Duke, the NBA lottery guys did not give Duke much today. Hood needed 10 shots to get 6 points and also had 5 turnovers, and Jabari Parker had 4 turnovers and 14 points and was not aggressive on the offensive end. Jabari far too often settled for jump shots rather than play to his strengths by taking the ball inside. The only thing Duke did wonderfully in this game was rebound the basketball, they won that battle against a bigger team, which is surprising because that stat would normally make you think that Duke was the tougher team, a true test of that is the amount of free throws. Mercer made 23, while Duke made 12. That doesn’t get it done in todays college basketball.

There was lots of blame to go around and of course there is the clamor time and time again that this falls solely on the shoulders of the coach. There is a coaching staff full of guys that have played the game and gone through wars. Wojo, Capel, James, Scheyer and K know what it takes to make a winner. In my humble opinion when you consider that this is the same defense that Duke has been running for years with great success you have to put this more on the players, we as fans were pretty aware of the defensive shortcomings of this team. It was there for the entire world to see, every game of it. Seeing guys reacting slowly, not moving their feet. Trying to take last years charges with this years rules. They did not play with the highest basketball IQ at times and they did not communicate well. If you have a young team and they are not fully buying in, especially on the defensive end what do you do? You can coach until you are blue in the face but after tip-off the coach can’t sub into the game and help you. Players win games and players lose games and that is and has been always my position and it isn’t changing. perhaps the staff didn’t find the right buttons to push but players shouldn’t need that.

A lot has been made of whether or not Hood and Parker will be back, I’m ok not knowing. I’ve been asked my opinion as to whether I think they should stay. I wouldn’t be upset or surprised if both left or both stayed. What I do know is that there is stuff for both to learn. It is clear Jabari may be the most talented player in the game today but that talent is top-heavy on the offensive side. Defensively he is a liability and could stand to improve it. The NBA may not care now about that part of his game but in 6 years when there is a game on the line and Jabari has to get a stop, they will care then. Media types of course want every player who can put the ball in the basket to go pro, be a one and done – they want headlines and stories nevermind basketball is played on two ends. Coach K for the most part has added players to the league that have been able to stay in the league because they are good basketball players, not just good shooters or good dunkers. So if there is stuff that Coach K can teach them I say come back, again I don’t expect it, but I think it wise. There are some to say injury isn’t worth the risk or that you will come back and expose your weaknesses, I say the best place to work on your weaknesses is in the college game. The NBA isn’t a teaching tool. The NBA is for men that are ready to produce. You are constantly playing for the next contract. If you do not produce, enjoy the D-league or worse yet play your way out of the league. If you truly are worthy of being a lottery pick, that doesn’t change with growth, even if you don’t go number one by staying a year of two extra, what you will be is a year smarter, a year better and much more able to play for that second contract so possibly maybe extend your NBA life. Just one mans opinion.

As for Duke, there is help on the way but if I’m being honest I would love to see them add a power forward through transfer, 5th year senior or JUCO, or grab a lesser rated recruit based on his toughness because right now Duke is in desperate need of toughness. The recruits coming in will help Duke, they will help Duke quite a bit, next years team will be a lot more versatile. Fans needs to be wary of putting all eggs in the freshman basket. Tyus Jones, Jahlil Okafor, Grayson Allen and Justise Winslow are going to be fantastic players but Duke will only go as far as its upperclassmen take them. As an aside I am very tired of wannabe pundits and people who put no value on players simply because they have great high school careers, everything is freshman focus and it’s the dumbest thing I have seen in a while. This trend needs to stop. This is the result of not only media-types but also the 20 something generation of bloggers and twitter pundits who know nothing of college basketball history beyond the last few years. We all love the recruiting angles and stories but in this world 99% of the time, freshmen are simply complimentary pieces to upperclassmen and do not lead their team to post-season success.

All that being said I am do or die a duke fan, if you aren’t then maybe you need to go cheer for a different shade.