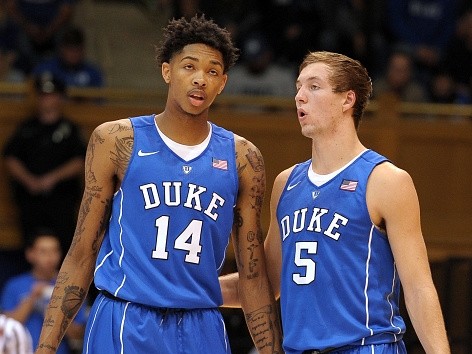 Don’t let the finally tally in Dukes 91-75 victory over Wake Forest overshadow a tough gritty win for the Devils of Durham. Wake fought the Devils tough for most of the game but Dukes offensive prowess proved too much in the last half of the second stanza. Wake used it’s depth to try to wear Duke down playing 8 players over 15 minutes in the game while Duke used 6. Wake exposed Duke on the boards out-rebounding the Devils in the first half 20-9 in the first half. That edge in rebounding allowed Wake a 10-0 advantage in second chance points and helped keep the game within striking distance for the Demon Deacons. Duke held a 3 point advantage at the half despite a deficit in in points in the paint, second chance points, bench points and fast break points.

What Duke did do well in the first half was put the ball in the basket to the tune of 60% overall and 50% from beyond the arc. Duke also only turned the ball over 3 times and only 6 for the game.

Forward Devin Thomas led Wake in scoring with 21 points and 12 rebounds despite only playing 27 minutes and spending much of the second half in foul trouble. Duke had no much answer for the senior who bulled his way in the middle with a multitude of moves. Wake also got 20 points from Codi Miller-McIntyre who also pulled down 7 boards from his guard spot.

Duke was paced by sophomore Grayson Allen who scored 24 shooting 70% from the floor and dishing out 3 assists. Allen was fearless in taking the ball to the hole and used his driving ability to decoy Wake into leaving senior Marshall Plumlee open on the baseline. Plumlee used his 34 minutes efficiently as well going 7 of 7 from the floor and 4-4 from the free throw line. Plumlee also pulled down 7 boards to go with this 18 points.

Luke Kennard has been on a tear as of late and seems to have found his groove. Kennard looked comfortable on the floor and scored at will against Wake to the tune of 23 points on 7-11 shooting. Kennard also went 9 for 9 from the free throw line and dished 3 assists.

Duke did pull away from Wake in the second half by being aggressive going to the basket and putting pressure on the Wake defense which seemed to give up the lane rather easily at times. Duke had to accomplish this with two of it’s star players playing with foul trouble – Grayson Allen and Matt Jones both received their 4th fouls and spent significant stretches on the bench. Jones would only play 8 minutes of the second half and Allen just 12.