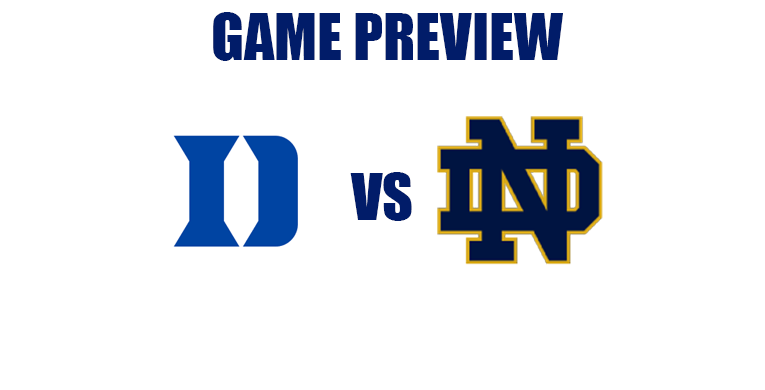 By Randy DunsonJanuary 29, 2017No Comments

The Notre Dame Fighting Irish will host the Duke Blue Devils in an ACC showdown Monday night from the Purcell Pavilion. The Blue Devils came back to defeat Wake Forest 85-83 on the weekend, and the Fighting Irish are coming off a tough 62-60 road loss to Georgia Tech on Saturday afternoon. Notre Dame won both meetings against Duke last season.

The Duke Blue Devils pulled off a terrific late comeback to notch a much-needed 85-83 road win over Wake Forest on Saturday. Duke was trailing 83-76 with two minutes remaining and went on a 9-0 run to end the game. The Blue Devils shot a solid 48% from the field and out-rebounded Wake Forest 36-29. Luke Kennard was phenomenal in the win, sinking the game-winning three with six seconds left, and finished with 34 points on 11 for 14 shooting. The sophomore guard has posted a 50% or higher efficiency from the field in four out of his last five games, and is now averaging a team-leading 20.4 points per game, placing him second in the ACC in scoring. Grayson Allen also had a big night, nailing five three-pointers for a total of 19 points. Allen is now third in team scoring with 15.3 points per game. The Blue Devils really needed that win to stay close in the ACC standings as they remain 2.5 games back of first after the Tar Heels lost on Saturday, and are now 4-4 in conference action.

The Notre Dame Fighting Irish had a tough time against the Georgia Tech defense in a close 62-60 loss on Saturday afternoon. Despite only shooting 41%, the Fighting Irish were in it until the end however the Yellow Jackets score the game-winning basket on a lay-up as time expired. V.J. Beachem led the way offensively, sinking 23 points on a 12 for 22 mark from the field. The senior forward has been very inconsistent as of late, reaching double-digits in points in only five out of his last nine games, and is now averaging 14.5 points per game. Notre Dame’s leading scorer Bonzie Colson was outstanding in the loss, notching 14 points on 6 for 10 shooting and picked up 13 rebounds. The junior forward has now recorded 13 double-doubles on the season, and is scoring 15.5 points and leads the entire ACC with 10.6 rebounds per game. The Fighting Irish are struggling a bit right now, losing three out of their last four games, and it won’t get any easier going against Duke followed by a tough matchup at North Carolina. They are now 6-3 in ACC action, just one game back of the Tar Heels.

Notre Dame is now averaging 79 points per game, ranking them 62nd overall, and own a 46.6% field goal percentage. The Fighting Irish are now allowing an average of 67.4 points per game, positioning them 63rd overall. Both teams are solid defensively as Duke (although Duke has been spotty at best over the last 2-3 games) is holding opponents to 42.5% shooting and Notre Dame 41% shooting. Notre Dame has struggled offensively over their last two games as well as against the stronger defensive teams. In addition, Duke defends the three well so they should slow down Notre Dame’s scoring.

Notre Dame and Mike Brey have been a pain in Duke’s side for some time. Seemingly having Coach K’s number, Brey is one of the few current ACC coaches who own a winning record against K and Duke. With both teams struggling lately this game could be a dog fight but that honestly will depend on whether or not Duke shores up their defensive pressure and effort. Duke only managed a 2 point win at Wake and we all know that Wake Forest is no Notre Dame. In a perfect world Duke would have more time to prepare for this juggernaut of a team but the ACC is as unforgiving as any league in college basketball. Duke will have to grow up quick or get blown out. It’s as simple as that.

I am going with Duke in this contest. I know Duke has played well lately and they are not favored in this one, but I don’t trust Notre Dame right now. Notre Dame has not looked good as of late, losing three out of their last four games and have failed to score over 60 points over their last two games, so I would not feel confident siding with them. Also Duke has the better offense, averaging four more points per game than Notre Dame, and Duke has been outstanding at defending the three, holding opponent to 30% shooting from beyond the arc, and Notre Dame attempts a lot of three’s so I expect the Blue Devils to make it tough for Notre Dame to have their usual success from three-point territory. Duke also owns the rebounding advantage and come into this one with some momentum so I think they are the play in this one. It will be tight though with Duke pulling out a 75-70 victory.