By Brian HoraceMarch 17, 2019No Comments 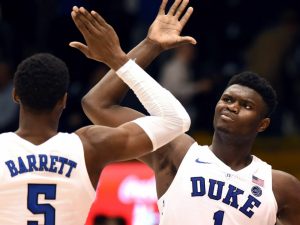 Even I had my doubts entering Saturday against a long and deep FSU team. It seemed like a nightmare scenario considering their lack of depth and down their starting center.  The Blue Devils of Duke were primed for an emotional let down after finally prevailing over their conference rival Tar Heels in the semi-finals of the ACC Tournament. The Blue Devils quickly had to set that win aside for a surging Florida State Seminole team who the previous night beat arguably the best team in the nation.

Early in contest the weary legs of a shorthanded team seemed to show. The Blue Devils shot 9 3-point shots in the first half and were only able to hit on 1 while Florida State was able to connect on 4 of their 11. The Seminoles seemed to be a step quicker in the early stages of the first half. The 4th seeded Seminoles jumped out to an 8 point lead with 7 minutes left in the first half on the strength of a Trent Forrest layup. Duke turned the ball over 7 times which led to 9 Florida State points. A quick 3 minute spurt by RJ Barrett and Zion Williamson tied the game at 27 points with 4:33 left in the first half. Both teams volleyed back and forth and battled to a draw at the half.

The second half saw the Blue Devils a much more energized team. FSU because the scoring with a 3 pointer by Terrance Mann to take the lead but Duke quickly went on a 14 to 2 run on the strength of much better defensive play to take a 50-41 lead. The Blue Devil lead would swell to 14 but a few careless possessions by the Blue Devils allowed the Seminoles opportunities and they took advantage and shrunk the lead to 5 points with 5:28 left in the game. Fortunately for the Duke faithful the Blue Devils had one more run on them. A 12-5 run sealed the game for the Blue Devils and locked up their 21st ACC Championship with a 73-63 win. For the Blue Devils to win they would need contributions from players aside from Zion Williamson and Tre Jones, RJ Barrett and Cam Reddish answered the bell. Reddish did not shoot the ball well in the tournament but did drive the ball aggressively (without charging) and was able to do some damage from the free throw line. Reddish was 6-6 from the free throw line and hit only one 3 pointer on 5 attempts but his 11 points and staunch defense was a huge asset for the Blue Devils. Tre Jones scored a career high 18 points, eclipsing the career high 17 points he scored versus Gonzaga in the Maui Invitational title game. Jones was 8-of-14 from the field – a career high for made field goals. R.J. Barrett chipped in 17 points on 8 of 17 shooting for the Blue Devils. Barrett also added 9 rebounds.

One of he unsung heroes of the game was junior Javin DeLaurier who scored 6 points and grabbed 7 rebounds and in the absence of Marques Bolden was able to stay on the floor. DeLaurier also had 2 steals and went 2-2 from the free throw line.

The Blue Devils were led in scoring by Zion Williamson who scored a game-high 21 points on 7-of-11 shooting and was presented the Everett Case Award as the ACC Tournament’s Most Valuable Player. He became the sixth freshman to earn the tournament’s MVP award, and first since North Carolina’s Brandan Wright in 2007.