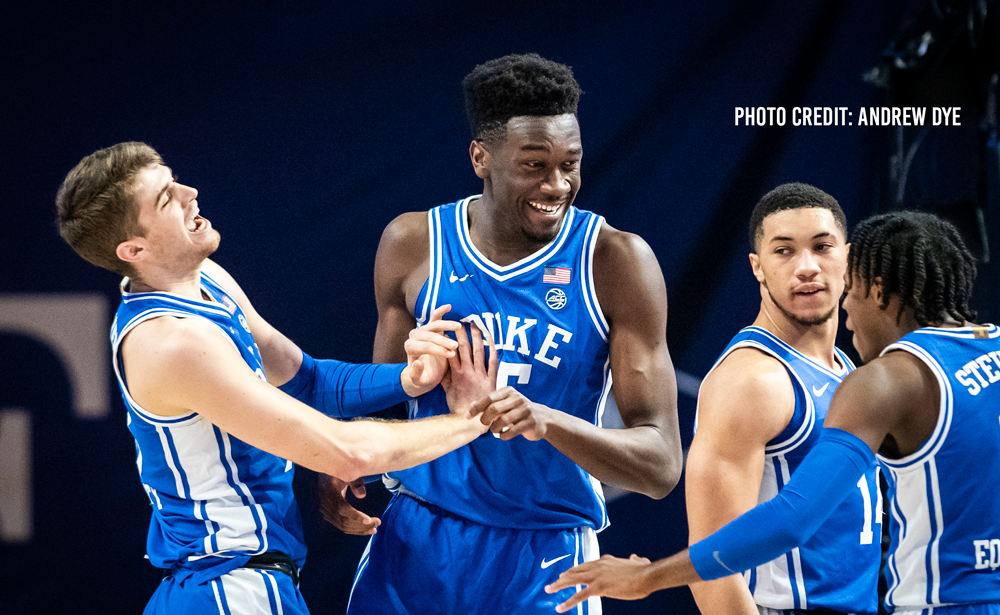 By Brian HoraceApril 22, 2021No Comments

With a single tweet from 7’0 center and rising sophomore Duke fans all over breathed a sigh of relief. You would think Duke fans would be used to watching players come and go with just a short stay in Durham with the amount of uber talented one-and-done players who have come and gone but when Duke began to lose players from a class that was expected to be the building blocks of at least a couple of years to come fans began to worry…incessantly worry. First Jalen Johnson opted out of the season before it came to an end and I’m not sure too many were surprised – Johnson had been a mercurial figure since high school and with him also nursing an injury, it didn’t feel unexpected. What was unexpected was the departure of 3 other freshmen. DJ Steward was expected to test the draft waters but most, considering his slight frame, thought he’d be back to build his body and work his game for another season. That didn’t happen. Duke also lost two freshmen to transfers in Jaemyn Brakefield and Henry Coleman. Coleman had seemingly passed Brakefield on the depth chart but with Duke looking to add depth in the backcourt both said their goodbyes. Brakefield to his hometown Mississippi and Coleman still undetermined as of yet. The Blue Devils also lost to graduate transfers who were not expected back next season in Patrick Tape` and Jordan Goldwire both opting to use their super senior season elsewhere. Tape` to San Francisco and Goldwire to Oklahoma. It was easy to see why fans were uneasy as to Williams’ status, he’d lost nearly every player he came in with. The class of 6 was now down to just 2 (Jeremy Roach).

Williams did have the most to gain by continuing his college career at Duke with how he finished the season his role was all but assured. Williams averaged 7.1 points and 4.5 rebounds a game during his freshman season but in his last 6 games averaged just under 17 points per game and nearly 8 boards.

Even with the mass exodus from Durham Duke’s cupboard is far from bare. All signs are pointing to freshmen point guard Jeremy Roach staying in Durham to become a sophomore and likely assuming a starting role. Junior wing Wendell Moore and senior Joey Baker should be on the roster as Duke’s lone returning upperclassmen and they are joined by two big man graduate transfers in Theo John, who spent 4 years at Marquette under former Duke Steve Wojciechowski and Bates Jones from Davidson. Duke will need that upperclassmen leadership to usher in a slew of freshmen. Duke is bringing in 3 top 30 players in forwards Paolo Banchero and Adrian Griffin, both projected as high draft picks and both skilled and athletic as well as versatile. In the frontcourt Duke is adding talented 2 Guard Trevor Keels who has spent the last season transforming his body becoming one of the strongest guards entering college to go along with him being one of the better shooters at the position in his class. Duke also added guard Jaylen Blakes out of Blair Academy who looks to be the backup to Jeremy Roach during his sophomore campaign and by all accounts being rated just outside the top 100 isn’t a reflection on the fire and ferocity in which Blakes plays the position.